posted at 6:56 pm by David Halperin 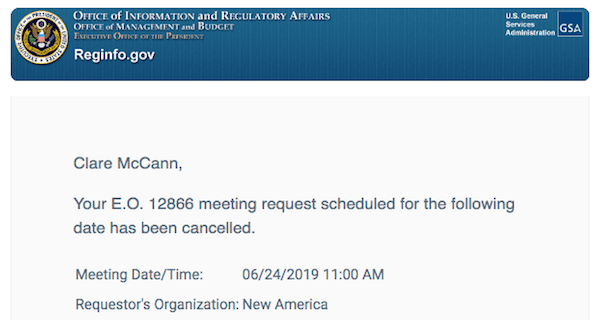 The Trump White House today notified student advocacy organizations that it was cancelling or refusing to schedule meetings to discuss the Department of Education’s new rules that relax accountability for colleges and college accreditors. The Office of Management and Budget’s Office of Information and Regulatory Affairs sent emails to the Center for American Progress, the Century Foundation, and the Institute for College Access and Success, all of which had requested meetings to discuss the rule; the messages stated, “An issue occurred with your meeting request and it has been declined.” OMB already had scheduled a meeting with New America; that group today received an email stating that the meeting “has been cancelled.”

The proposed rule, which these organizations and many more have argued will give unscrupulous for-profit education companies new ways to rip off students and taxpayers, was devised by Betsy DeVos’s top higher education aide, Diane Auer Jones. The Department was required by law to assemble interested parties for a series of meetings called negotiated rulemaking, but the Department heavily skewed the panel in favor of institutions and against students. Then the Department and its allies on the panel aggressively pressured the few pro-student representatives to accept a consensus rule, threatening that in the absence of consensus the Department was free to draft its own, even more anti-student rule.

As the New York Times reported yesterday, after the Department obtained this forced consensus, Jones, who previously worked for predatory for-profit colleges, popped a bottle of champagne in the negotiating room. Ivanka Trump tweeted congratulations to her “@BestyDeVosED.”

Now the administration has taken the next step to forcing the rule through, denying advocacy groups the chance to meet in person before a proposed rule is published.

Executive Order 12866, issued in 1993, contemplates these OMB-run meetings on pending regulations, but does not seem to require them, at least in the current circumstance. Under Trump, OMB, White House, and agency officials often simply stare blankly at advocates for students, consumers, workers, and the environment who show up at these meetings to protest the blatant and irresponsible elimination of health, safety, and anti-scam rules, but they at least have held the meetings — including on the Department of Education’s proposals to gut the Obama administration’s gainful employment and borrower defense rules, each dealing with for-profit college abuses.

Guided by Jones, DeVos appears to be in a hurry to issue the rule by November 1, to help ensure it goes into effect while Republicans — who should be against waste, fraud, and abuse with taxpayer dollars but seem just fine with it where for-profit colleges are concerned — still control the government.

It’s still possible that OMB will allow these 12866 meetings to happen after it issues a proposed rule.

The Department of Education informed members of the negotiation panel last week that a preamble justifying the draft rule, written by Department officials, would be privately circulated to them soon, suggesting it was almost completed.

UPDATE 06-11-19: Hours after OMB cancelled or rejected meetings with student advocacy groups, this morning DeVos released the proposed rule.  In keeping with the rushed, biased nature of the process, the Department of Education has cut short the period for public comments, given people only thirty days to file written objections.