posted at 3:11 pm by David Halperin 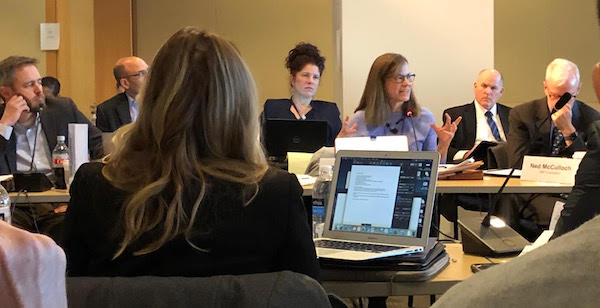 Robyn Smith, a lawyer associated with the National Consumer Law Center and the Legal Aid Foundation of Los Angeles, was selected by the U.S. Department of Education to represent students in negotiations earlier this year on a basket of new Department regulations affecting college accreditation, online education, and other matters.  The Department heavily stacked the negotiating panel against student and consumer interests, and, at the end of the process Smith agreed, under relentless pressure from the Department and other negotiators, to consensus regulations. Smith decided to take the deal after apparently concluding it was the least bad option under the circumstances, given that in the absence of consensus the Department, which has sharply favored the interests of predatory for-profit schools, would be able to write its own regulation. (Other student and consumer advocates present at the rule-making session, including me, opposed the proposed rules.)

In a just-released statement, Smith says essentially that the Department double-crossed her with the final regulations it released Thursday by making a last-minute change that will make it easier for online colleges to engage in fraud and offer low-quality programs.

There’s no point in paraphrasing.  Smith’s powerful statement speaks for itself and should be read in its entirety:

“I am outraged by the final regulations. The Department of Education did not give sufficient voice for consumers and students on the negotiating committee. It stacked the committee with industry negotiators from schools and accreditation agencies. It vetoed the participation of states attorneys general, even though the committee was considering regulations concerning states’ rights to take action against unscrupulous online for-profit schools. It departed from long-time rules under which it provided factual justification for the regulations it proposed before the proposals were discussed by the committee. In addition, the Department did not respond to any of the data requests regarding accreditation and distance education submitted by myself and the legal services negotiators who served on the subcommittees.

“Despite this, I negotiated in good faith. Although I faced opposition and sometimes hostility from some committee members, I stood firm on the regulations most important to the low-income students I represent – people of color, women, first generation students, veterans, working parents, and other low-income people who are most often targeted by deceptive for-profit schools. The most crucial regulation was enacted by the Department itself in November 2016. This regulation ensured that states retain their right to protect their residents from predatory, out-of-state for-profit colleges offering distance education, even when the states sign onto interstate reciprocity agreements.

“I did my best to reduce the harmfulness of the Department’s accrediting agency proposals. Because I counted the committee’s agreement to retain the 2016 distance education regulation as a major concession, and under tremendous pressure from the rest of the committee, I eventually agreed to the weakening of accrediting agency standards. I did so on the premise that the Department was negotiating in good faith and that it would not depart from consensus language without a very strong factual justification for doing so. I would not have agreed to the Department’s proposed set of rules otherwise.

“Now, the Education Department has reneged on its “historical consensus” and changed the critical distance education regulation in the final rules without sufficient factual justification. It amended the regulation to allow schools to offer distance education under reciprocity agreements that prohibit states from enforcing the state laws specifically enacted to prevent for-profit school abuses. In doing so, it ignored the overwhelming evidence that for-profit schools, including distance education schools, often engage in widespread and costly fraud harming both students and taxpayers. As a result, the Department has limited the ability of states to protect millions of students from predatory schools that waste students’ time and money while loading them with unaffordable debt.”

The anti-student final regulations issued by DeVos can be challenged in court; they should be.