posted at 2:40 pm by David Halperin 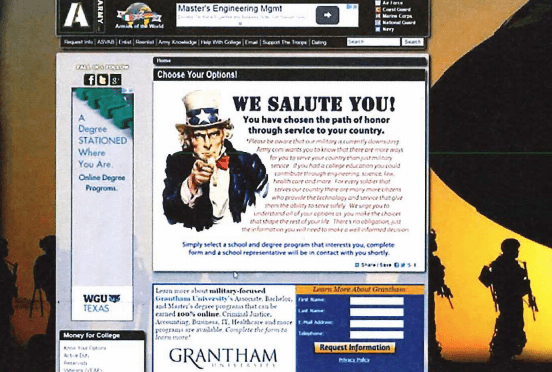 We reported in September on a Federal Trade Commission action to shut down a chain of scam websites aimed at attracting people who wanted to join the U.S. military. Sites operating at domains including Army.com, Air-Force.com, and Navyenlist.com seemed like official military portals, but their real aim was to steer visitors to high-priced, low-quality for-profit college programs.

I told the FTC about this fraudulent operation back in 2015, and I was glad to see the Commission take action, even if it took three years and relentless advocacy by veterans organizations, and, disappointingly, the FTC suspended an $11.1 million penalty, supposedly, “due to defendants’ inability to pay….”

But now a coalition of veterans groups has highlighted a particularly disgraceful aspect of what the operators of these websites — Alabama-based Sunkey Publishing, Inc. and Fanmail.com, LLC, and individuals Christopher Upp, Mark Van Dyke, Lon Brollar, and Andrew Dorfman were named in the action — did. They didn’t just try to fool visitors into thinking their portals were U.S. military websites. They used misleading claims to seek to dissuade them from joining the armed forces and trick them into signing up instead for predatory colleges.

As the FTC complaint against these scammers pointed out, Army.com told visitors to its site, under a picture of Uncle Sam and the headline “WE SALUTE YOU!”: “Please be aware that our military is currently downsizing. Army.com wants you to know that there are more ways for you to serve your country than just military service. If you had a college education you could contribute through engineering, science, law, health care, and more.”

In fact, as a letter sent Monday from the veterans groups to the FTC points out, what Army.com told potential military recruits “is the exact opposite of the truth – given that the US Army is currently facing a critical shortage of volunteers…” (That is true.) Accordingly, the vets groups tell the FTC,  “the websites’ actions are particularly pernicious and damaging to military readiness and national security.”

The vets groups added, “Patriotic citizens visited these websites, trying to enlist in the military to serve their country, but their contact information never was given to the Armed Forces. Instead, their attempts to volunteer with the Armed Forces were re-routed to bad actor colleges that bombarded them with sales pitches to attend the bad actor college rather than serve in the military.”

The organizations call on the FTC “to disclose the names of the unscrupulous colleges that participated in this scheme to deny the Armed Forces of its volunteer enlistees.” A statement by FTC Commissioners Rohit Chopra and Rebecca Kelly Slaughter, released at the time of the FTC’s September action, urged the same: that the public learn the names of the ripoff colleges that paid the scammers to provide them with names and contact information for potential enrollees.

Carrie Wofford, the president of Veterans Education Success, emailed me, “It is hard to conceive of a more reprehensible scheme. The colleges that participated in this ugly scheme should not be protected.”

As we noted in September, a review of old iterations of the Army.com site on the Internet Archive Wayback Machine shows that it listed as “Partner Schools” many for-profit colleges with troubling records,  including All State Career College, American Career College, Ashford University, ATI, Colorado Technical University, DeVry, Everest, Full Sail University, Heald College, Kaplan College, Kaplan University, Keiser University, Sanford-Brown College, University of Phoenix, Virginia College, and Westwood College. We don’t know if that means those schools paid the shady operator of the site for leads, or for advertising, or didn’t pay them at all. But we should be able to find out. We know from other reporting and legal filings that many of the same for-profit colleges have used other deceptive lead generators.