Republican Attorneys General Use Corporate Cash To Lobby for Kavanaugh

posted at 2:29 pm by David Halperin 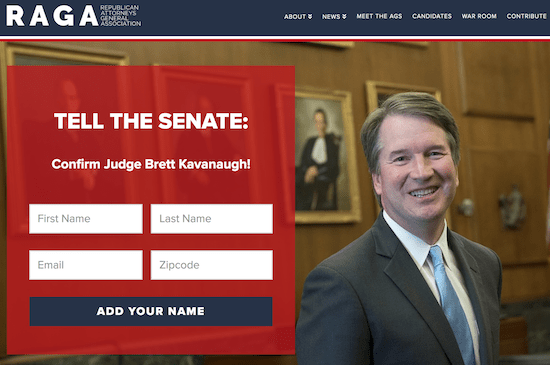 At a time when serious doubts have been raised about Brett Kavanaugh’s honesty and personal conduct, Republican state attorneys general are putting their own integrity at issue by running a political campaign to confirm Kavanaugh. On the website of the Republican Attorneys General Association (RAGA), there’s a page for you to provide your contact info and “TELL THE SENATE: Confirm Judge Brett Kavanaugh!”

As Documented’s Nick Surgey aptly stated, “There’s something unseemly about AGs trying to pick their own judges.”

State attorneys general regularly represent their citizens before the U.S. Supreme Court on matters from environmental and consumer regulation to religious freedom to criminal justice. If Kavanaugh somehow survives in the face of allegations that he gave false testimony to Congress regarding his tenure in the Bush administration and that he committed sexual assault during high school, he may be tempted, as a justice, to show gratitude to the Republican AGs who had his back. These top law enforcement officials, charged with upholding high standards of integrity, should not be waging a campaign to confirm Kavanaugh and, inevitably, curry favor with him.

The GOP AGs also sent a letter to the Senate in July endorsing Kavanaugh.

The Republican AG politicking on behalf of Kavanaugh is even more troubling when you consider that RAGA — whose stated mission is to elect Republicans as state attorneys general, as well as to advance principles including “limited government… free enterprise, aggressive crime fighting, equal opportunity, and the preservation of conservative values” — gets much of its funding from corporations that have interests affected by the decisions of the Supreme Court, as well as by actions of the various state AGs.

RAGA’s biggest donor — providing $2.9 million in 2017 and $1.7 million already in 2018 — is the Judicial Crisis Network, the conservative advocacy group that is leading a multi-million dollar public campaign, with heavy TV advertising, to confirm Kavanaugh. The dark money Judicial Crisis Network doesn’t reveal its own donors, but it’s tied to the corporate-backed Federalist Society, the political network of the oil and chemical industry Koch brothers, and other mysterious wealthy contributors.

To add to the incestuous nature of these efforts, the Judicial Crisis Network also paid Jon Kyl, a lobbyist at the DC mega law firm Covington & Burling, to push the nomination of Trump’s previous Supreme Court pick, Neil Gorsuch. The Trump administration this year hired Kyl to shepherd the Kavanaugh nomination, a role that ended when Arizona’s governor tapped Kyl, a former U.S. senator, to return to the Senate to take John McCain’s seat and, presumably, to vote to confirm Kavanaugh for the high court.

In addition to getting big money from wealthy interests through JCN, the Republican AG group has received direct donations from numerous large corporations including Koch Industries, ExxonMobil, Monsanto, Facebook, Altria, Coca Cola, Wal-Mart, Mastercard, Johnson and Johnson, UPS, and Murray Energy, as well as the U.S. Chamber of Commerce and the National Rifle Association (RAGA’s second largest donor in 2017).

Many of these corporations have had big cases before, and all have important interests in the decisions of, the U.S. Supreme Court. Indeed, these companies already have reason to suck up to Judge Kavanaugh, who currently sits on what is considered the second most powerful court in the nation, the U.S. Court of Appeals for the District of Columbia Circuit. And, of course, these corporations have business before the state AGs, which makes their donations to RAGA unseemly in the first place.

Not satisfied with its big corporate donations, RAGA also wants money from Kavanaugh supporters.  If you enter your contact info into RAGA’s “Confirm Judge Brett Kavanaugh!” form and press send, there’s no indication of how RAGA will be presenting your opinion, but you are taken to another page where you are invited to contribute $25, $2500, or other amount to the group. In that light, the RAGA campaign to confirm Kavanaugh may mostly be just a cynical way for the AG group to leverage conservative support for Kavanaugh into cash for its own purposes.

When it comes to how RAGA spends the money it receives, in addition to funding GOP candidates, the Republican AGs also seek to curry favor with President Trump — spending $75,000 on two 2017 events at the Trump hotel in DC and at Mar-a-Lago.

Bottom line, the Republican attorneys general — the highest law enforcement officers in their states, from Idaho to Florida to New Hampshire — are taking cash from big corporations and others and using it to promote the candidacy of troubling nominee Brett Kavanaugh, a man whom both the state AGs and the corporations hope will rule in their favor if he makes it to the Supreme Court.

Whatever the opposite of draining the swamp is, it’s right here.