posted at 2:13 pm by David Halperin 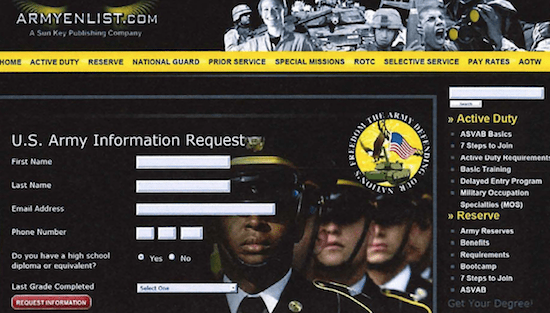 The Federal Trade Commission today obtained an agreement from for-profit college lead generation operators to hand over the army.com, air-force.com, armyenlist.com, navyenlist.com, and other internet domains, which they used to trick people into believing their operations were associated with the U.S. military.

Unfortunately, as is often the case, the FTC settled for a promise not to do it again, rather than imposing serious punishment on people who have been engaged in egregiously deceptive behavior.

I have been raising concerns about army.com and other military-branded websites being used by these and other shady operators for several years, including in articles and at an FTC “workshop” event in October 2015.

In 2012, a group of state attorneys general had shut down the deceptive GIBill.com website, which was being used, by the company Quinstreet, as a for-profit college lead generator, but these kind of scams kept proliferating after that.

I told the FTC event in 2015 that when I visited army.com, an ad popped up for a for-profit school, Grantham University. I was then asked to provide my contact information. When I  navigated to a section of the site seeking “AFFORDABLE EDUCATION” and selected any degree or major, I ended up on a landing page for Grantham University.

Now, nearly three years later, thanks to the FTC, army.com can be utilized by the United States Army instead of by a deceptive lead generation company.

The FTC today filed a lawsuit in federal court against Alabama-based Sunkey Publishing, Inc. and Fanmail.com, LLC, and a group of associated companies and individuals — Christopher Upp, Mark Van Dyke, Lon Brollar, and Andrew Dorfman. In settling the action these companies have agreed to relinquish the domains and stop engaging in deceptive practices. The FTC says the companies have been using these military copycat sites since at least 2010.

As the FTC complaint notes, these websites asked visitors to submit their personal information to learn more about joining the armed forces. But instead of connecting visitors to military recruiters, it sold their information to for-profit colleges for $15 to $40 per lead. Even more shameful, sales representatives who used the leads would in turn pretend to be members of the military as they peddled programs at for-profit schools.

In a press release, FTC chair Joe Simons says, “Those who are considering a military career deserve to have confidence that the recruitment site is legitimate and their personal information will not be misused. The FTC will take action against any party in the lead generation ecosystem – from sellers to purchasers – that fails to comply with the law.”

But, disappointingly, the FTC, as it often does, then failed to actual provide any real deterrence for future bad behavior. Surrender of the web domains, according to the FTC,  “partially satisfies the civil penalty judgments of $11.1 million against Sunkey and $1 million against Fanmail” that the commission sought. And, “The judgments are otherwise suspended due to defendants’ inability to pay….”

Where did all those $15 to $40 go?  Why aren’t Upp, Van Dyke, Brollar, and Dorfman being held responsible for nearly a decade of fraud and deception? How much money did they make tricking people who were seeking to join the armed forces?

Last October, the FTC reached a similar encouraging-but-weak settlement with another military-branded lead generation operation that I had previously highlighted, Victory Media. (The only other FTC action against a for-profit college lead generator was a settlement with Florida-based Expand, Inc., another operation I had brought to the commission’s attention; in that case the Commission did demand $360,000 of the $90.2 million fine it sought.)

In today’s case, FTC commissioner Rohit Chopra, joined by commissioner Rebecca Kelly Slaughter, issued a separate statement stressing the harms to individuals from these deceptive practices and calling on the full commission to turn its attention to the for-profit colleges that purchased the leads and then enrolled the people deceived:

I am concerned that buyers of these leads may be turning a blind eye to the deceptive tactics employed by lead generators. What is particularly concerning about this case is that the buyers were colleges and universities that enjoy substantial subsidies from taxpayers.

I believe it would be in the public interest to disclose Defendants’ full list of purchasers of their leads, regardless of whether they are public or private, or whether they are for-profit or nonprofit. We should all be worried that some institutions of higher education see students as nothing more than potential revenue and are willing to turn to outfits employing unsavory tactics to meet their financial objectives.

A review of old iterations of the Army.com site on the Internet Archive Wayback Machine shows that it listed as “Partner Schools” many for-profit colleges with troubling records,  including All State Career College, American Career College, Ashford University, ATI, Colorado Technical University, DeVry, Everest, Full Sail University, Heald College, Kaplan College, Kaplan University, Keiser University, Sanford-Brown College, University of Phoenix, Virginia College, and Westwood College. We don’t know if that means those schools paid the shady operator of the site for leads, or for advertising, or didn’t pay them at all. But we should be able to find out.

We know from other reporting and legal filings that many of the same for-profit colleges have used other deceptive lead generators.

The Internet remains stocked with phony bait and switch college lead generation sites — promising jobs, food stamps, and other things low-income people badly need, but offering instead only the opportunity to be tricked into providing contact information that is quickly sold to unscrupulous, deceptive for-profit colleges. Betsy DeVos has turned the U.S. Department of Education into a cheerleading team for the very worst predatory colleges. So students, consumers, and taxpayers need a serious FTC effort to crack down hard on these deceptive practices — including with serious financial penalties that will help deter misconduct.