Why Would DeVos Cancel a Student Loan Rule That Works?

posted at 5:30 pm by David Halperin 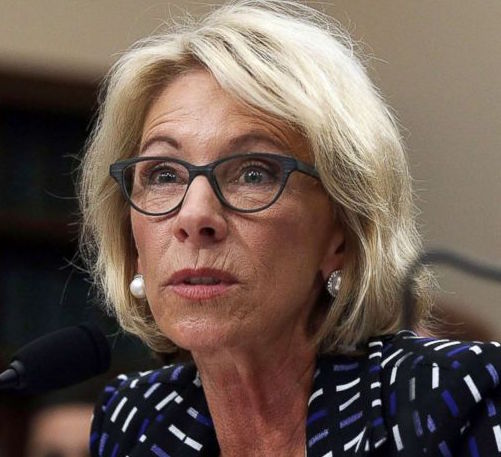 The following are comments I made today at the Department of Education rule-making meeting on student loan issues.

Many for-profit colleges get 80 percent, 90 percent, or more of their revenue from taxpayers. Taxpayers have a right to expect adequate performance and avoidance of waste, fraud, and abuse.

Some for-profit schools do a good job. But there’s enormous evidence that many for-profit schools, getting billions in federal aid, have engaged in deceptive and fraudulent practices and that many students have been left with terrible outcomes, including insurmountable debt. That’s the problem.

The Department had to act, and it did, with the gainful employment rule, and the 2016 borrower defense rule.

Ms. Weisman told you this week you should get the rule right, because the Department should not have to start a new rulemaking any time soon to fix it, as it has many other regulatory issues to address.

But that is what the Department is doing now: revisiting an issue it decided less than 15 months ago, and decided correctly, after listening carefully to all stakeholders.

Secretary DeVos has claimed that under the 2016 rule “all one had to do was raise his or her hands to be entitled to so-called free money.” That is not so. A student would have to show school misconduct, and relief would remain an uphill battle for many students who were in fact injured.

School operators insist in this meeting essentially that former students would act as con artists, and exploit the rule to bring down good schools like theirs, even when the school leadership did nothing wrong. What kind of scam would that be?

A student would have to put in all the hours of classes, studying, commuting; find child care; commit personal and family money, Pell grants, GI bill; and take out the high-interest private loans often needed to attend expensive schools. Most of that time and money would never be regained. All this alleged scam could achieve is possible cancellation of federal loans — far from the whole thing, and far from guaranteed.

Look at the facts. Since the Department started taking borrower defense seriously after the collapse of Corinthian and ITT, it has received about 99,000 claims. 98.6 percent are from students who attended for-profit schools. Very few are from non-profit and public colleges. But also there are many for-profit schools where not a single student has filed for debt forgiveness.

Students who attended good schools, it seems, are not seeking loan relief.

For the owners who believe their schools are honest and effective, here’s how you would avoid trouble under the 2016 rule: Be honest and effective. Don’t set out to deceive or defraud students. Train your admissions staff to behave ethically. Offer a quality, valuable education at a fair price.

There’s no reason to believe the Department would create a kangaroo court and start rubber stamping phony student debt relief claims, or that the 2016 rule would force it to. No reason. All the 2016 rule does is give the student a fair chance to be heard.

If a few students at a good school managed somehow to get their loans forgiven, taxpayers, not the school, would be on the hook for the money. Recoupment is in the Department’s discretion. Only if the Department saw egregious or persistent wrongdoing would it likely come after the school, and the school would be able to defend itself.

In that light, it seems clear that the 2016 rule is not a lucrative racket for crooked students at honest schools. Instead, it’s basic protection for honest students at crooked schools.

Compare that to the rule the Department proposed this week.

Mr. McComis, who runs the leading for-profit college accreditor, told you that this proposal “feels a little stacked against the student.” He described the multiple constraints to debt relief as “belts and suspenders on pants that are too tight.” He added, “I find it just not reasonable that a student would be able to achieve anything… If that’s the intent, I’m not sure why we’re here.”

The draft rule would impose one of the toughest legal standards the government has ever required of a private party – and impose them on lower-income people who lack the means to meet the burdens, whatever the justice of their claims. The draft rule also would render the 1994 law a nullity. The Department doesn’t have the power to do that.

The Department does have the power to prohibit forced arbitration clauses as a condition of receiving Title IV aid, and I commend the Department lawyers who got that right the first time. The Justice Department’s position on the Federal Arbitration Act is not on point.

One last thing: The suggestion that stronger borrower relief is worse for taxpayers is short-sighted at best, dishonest at worst. If the Department granted injured students meaningful relief, it would soon have a stronger sense of the enormous costs of allowing bad schools to participate in the federal aid program, and it would remove the worst actors more quickly. I believe that’s exactly what bad schools are afraid of. Good schools should want a strong borrower defense rule that drives out unscrupulous competitors, the ones who have given the for-profit college industry its bad reputation.

All of you, I hope, got into the education field because you believed in the power of learning to lift people up and change lives. If you stay true to those beliefs, the best course is to reject proposals that, in truth, slam the door on abused students. The existing rule can work, and would protect students, taxpayers, and good schools. You should reaffirm that rule.