posted at 5:02 pm by David Halperin 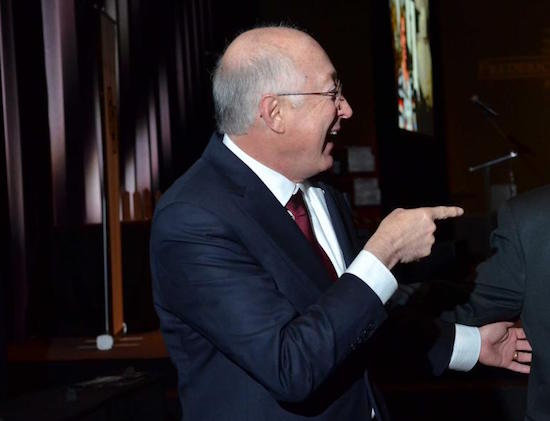 Ken Salazar, a former Obama Interior Secretary and Democratic senator, spoke at an oil and gas industry gathering last Thursday and was critical of the wave of lawsuits brought by U.S. cities and counties seeking damages from the industry for the effects of climate change. “I don’t agree with those who take those positions into the courts,” Salazar reportedly said at the annual Denver luncheon of the Colorado Petroleum Council, which in turn is a division of the national trade group the American Petroleum Institute.

In his remarks, Salazar also slammed a proposed Colorado ballot initiative that would require new oil or gas wells to be located at least 2,500 feet from buildings and bodies of water; he called the measure “fundamentally unconstitutional.”

Coverage of the remarks by the right-wing outlet Daily Caller and the industry site Western Wire each played up Salazar’s Democratic Party credentials in trumpeting his opposition to the lawsuits and the proposed regulation. One of two Daily Caller pieces about the event was bluntly entitled, “ENVIRONMENTALISTS’ FEAR-MONGERING ABOUT OIL DRILLING IN COLORADO IS SO BAD, OBAMA’S INTERIOR SEC HAD TO CALL THEM OUT.” The other was called, “OBAMA INTERIOR CHIEF DISAGREES WITH CLIMATE LAWSUITS.”

But each piece omitted an important fact: Salazar is a partner at the giant DC-based corporate law firm WilmerHale, which has represented oil and gas interests for decades, and Salazar himself advises companies in the industry.

According to a March 2018 WilmerHale press release, “Salazar continues to influence our energy economy through his work with some of the most significant energy companies in Colorado and across the US. As a practicing attorney in WilmerHale’s Energy, Environment and Natural Resources Practice, he advises major national and Colorado-based energy clients on issues they face in the environment and natural resources space.”

As Interior Secretary, Salazar tightened regulations on offshore drilling after the catastrophic 2010 BP oil spill, in the face of a team of WilmerHale lawyers, led by powerhouse ethics wiz Jamie Gorelick, that pressed to get BP off the hook. In revolving door DC, of course, few were surprised when Salazar then joined WilmerHale in 2013, although he pledged at the time, “I will be completely segregated from revenues that come in from BP. I am not going to represent BP, and I’m not going to make any money from BP now or ever.” Since money is fungible, it’s a bit unclear how Salazar planned to accomplish that.

Salazar, who also previously served as Colorado’s attorney general and as the chair of Hillary Clinton’s 2016 presidential transition planning team, did not respond to a request for comment and for information about his fossil fuel industry clients.

None of Salazar’s ties to fossil fuel companies were noted by the Daily Caller, which was founded in 2010 by Tucker Carlson, who is now a Fox News host but is still affiliated with the site.

The Daily Caller’s associated non-profit foundation, whose cozy relationship with the for-profit Daily Caller website raises serious issues regarding compliance with federal tax regulations, has received millions in donations from oil and gas-related interests and climate deniers, including the Koch brothers, Foster Freiss, the National Mining Association, and Southern Company. (The for-profit arm was paid by the 2016 Trump campaign for use of its email list to target contributors.)

The website has a history of going to bat for industries embroiled in public policy controversies, including the predatory for-profit college industry

Meanwhile, Western Wire, while styled as an online media outlet, is upfront about the fact that it is a project of Western Energy Alliance, a Denver-based oil and gas industry trade group whose board of directors over the years has included executives from industry giants like Devon Energy, Halliburton, and Anadarko Petroleum. Its headline about Salazar’s Denver remarks also traded on his Democratic credentials: “Former Obama Interior Chief Says He Disagrees With Climate Lawsuit Theories.”

As for the group that Salazar addressed in Denver, the American Petroleum Institute’s membership includes many fossil fuel industry companies, including ExxonMobil, which is one of the two defendants being sued over climate change by Boulder County, San Miguel County, and the City of Boulder, Colorado. Salazar’s criticism of the lawsuits must have warmed the hearts of audience members.

At the same lunch, Salazar criticized as unconstitutional another burning industry concern: The proposed Colorado ballot initiative regulating new oil and gas wells. Sitting alongside Salazar, American Petroleum Institute CEO Jack Gerard claimed that the initiative, “puts 80 percent of the oil and gas opportunity in this state off limits.”

But supporters of that measure cite a 2017 Firestone, Colorado, fatal home explosion triggered by gas leaking from a nearby well. They argue that drilling so close to homes, schools, workplaces, streams, and rivers risks more injuries and harms.

The Firestone well was operated by oil and gas giant Anadarko. On April 26, 2017, the day that Colorado governor John Hickenlooper’s Colorado Oil and Gas Conservation Commission and the Firestone fire department connected the explosion to an uncapped flowline at the Anadarko well, a corporate lawyer telephoned Hickenlooper’s chief lawyer, Jackie Melmed, and said he represented Anadarko. The lawyer was Ken Salazar. (When Salazar was Interior secretary, Anadarko obtained several favorable decisions from his department.)

Both the Denver Post and Denver’s ABC affiliate reported on Salazar’s criticism of the ballot initiative without mentioning Salazar’s ties to Anadarko or the fossil fuel industry.