posted at 1:01 pm by David Halperin 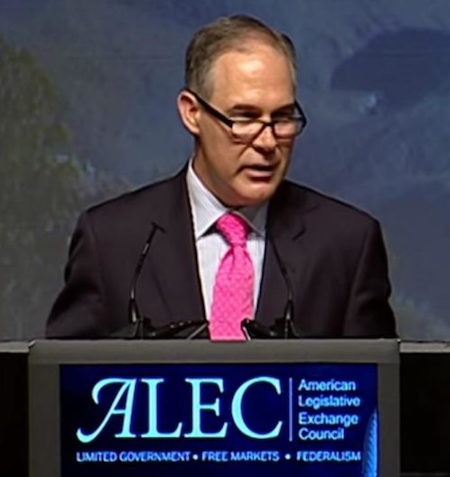 Senator Sheldon Whitehouse (D-RI) this morning wrote to the office of the Trump EPA nominee, Oklahoma Attorney General Scott Pruitt, to renew his demand for information about Pruitt’s communications with fossil fuel companies — and to suggest that Pruitt may be deliberately concealing information from senators weighing his confirmation.

In response to a written question from Whitehouse regarding such records, which have been the subject of requests under Oklahoma’s Open Records Act for more than two years, Pruitt wrote that he was not familiar with the pending requests and referred Whitehouse to the Oklahoma attorney general’s office.

Whitehouse, in his letter today, responds, “I find Mr. Pruitt’s claims that he is not aware of pending open records requests at his office and is apparently powerless to provide that information to the Committee on his own accord, hard to believe, and suggestive of an effort to hide information from the Senate before his confirmation.”

This morning, Whitehouse and the other Democrats on the Senate Environment and Public Works Committee boycotted a committee vote on the Pruitt nomination, stalling action, at least temporarily.

Whitehouse cites reporting that at least 52 Open Records requests remain unfulfilled by Pruitt’s office. Six of those are from the Center for Media and Democracy (CMD). One, dating back to January 5, 2015, seeks communications between Pruitt and his top staff and Koch Industries, Devon Energy, Peabody Coal, and other entities. Another, from November 2015, seeks records relating to the Republican Attorney Generals Association, a group for which Mr. Pruitt has raised money and which has paid for Pruitt’s travel expenses. Other requests are for emails between Pruitt and the industry-supported groups ALEC, Competitive Enterprise Institute, State Policy Network, and AG’s United for Clean Power.

Whitehouse charges that Pruitt’s relationship with these groups “could present conflicts of interest should he be confirmed as Administrator of EPA.”

Whitehouse has a point.  Obviously, fossil fuel companies have a strong interest in EPA decisions and regulations. Senators, and the public, are entitled to learn more about the relationship between Attorney General Pruitt and these companies before the Senate votes on whether Pruitt should run the EPA.

Nick Surgey of the Center for Media and Democracy provided me with a January 17, 2017, letter to CMD from Pruitt’s general counsel, Sarah Greenwalt, stating that Pruitt’s office had identified more than 3000 documents in response to CMD’s January 5, 2015, request for records regarding Pruitt’s communications with fossil fuel companies. Addressing concerns about the delay, Greenwalt wrote that Pruitt’s office processes requests “in the order in which they are received” and that the CMD’s request was now “second from the top.” If that representation is correct, Surgey sensibly concludes, Pruitt’s office has not responded to a single Open Records Act request in more than two years.

The January 17 letter to CMD from Pruitt’s office concludes, “I unfortunately do not have an expected response date to give to you at this time.”

Others have in the past complained about long delays in getting responses from Pruitt’s office under the Oklahoma Open Records Act, whose stated purpose is to “ensure and facilitate the public’s right of access to and review of government records so they may efficiently and intelligently exercise their inherent political power.”

But I haven’t seen complaints from others that requests were taking more than two years.

Pruitt’s two-year failure to respond to public records requests concerning his ties to fossil fuel interests would seem to undermine the purpose of the Oklahoma law. Pruitt’s present unwillingness to assist in providing these records to the U.S. senators considering his confirmation suggests he may indeed have something to hide.