While Trump Blusters, Koch Brothers Get Their Way 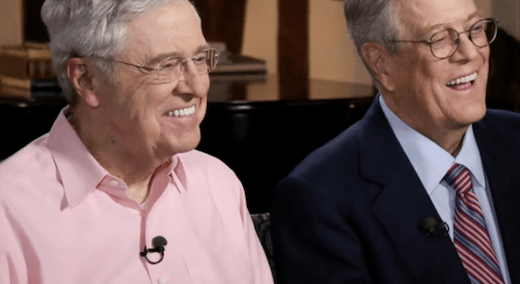 Key factors in Donald Trump’s electoral college victory included the candidate’s own tremendous huckster skills, the support of the right-wing Mercer family, and the sneaky interventions of Vladimir Putin. But none of those oligarchs have turned out to be the real winner of the 2016 election. While Trump enjoys his Twitter feuds, racial dog whistles, kleptocratic emoluments, and starring role in his high-rated reality show, the actual policy changes in Washington have most closely aligned with the long-standing agenda of the billionaire Koch brothers, Charles and David — perennial conservative donors who strongly opposed Trump’s rise in the GOP until it became inevitable.

The announcement last week by the Koch network that Vice President Mike Pence will be the keynote speaker at the brothers’ policy and political strategy meeting, set for October 12 and 13 in Manhattan, is just one sign of the Kochs’ ascendancy. In announcing Pence’s appearance, top Koch aide James Davis crowed, “Pence truly understands how good policies can help all Americans improve their lives.”

Another sign was the placement of Americans for Prosperity president Tim Phillips, one of the Kochs’ top lieutenants, just one seat from Trump at a White House dinner last week for conservative group leaders. (Only Penny Nance, head of Concerned Women for America, Fox News contributor, and one of the only women in the room, sat between them.)

Also notable was that the only Trump cabinet member at the dinner, seated across the long table from the president, was Environmental Protection Agency head Scott Pruitt. Pruitt embodies the Trump Administration’s wholesale turnover of environment and energy policy to the fossil fuel and chemical industries, of which the Kochs are bedrock members.

By rolling back environmental regulations — something they can do without any legislation from the paralyzed Congress — the politically ambitious Pruitt and Interior Secretary Ryan Zinke are giving Koch Industries and their fossil fuel allies everything they want.

Pruitt’s EPA also rejected, against its own scientists’ advice, a petition to ban chlorpyrifos, a toxic pesticide that the farming industry wants to keep using. And Pruitt has blocked a rule to make America’s chemical plants safer, despite the clear evidence that many plants endanger workers and surrounding populations and could cause numerous deaths in the event of an accident, sabotage, or a natural disaster like the recent hurricanes. Koch Industries has long been the most aggressive lobbyist fighting against chemical safety requirements.

Trump also has revived the controversial Dakota Access and Keystone XL pipelines — both projects that could benefit Koch interests.

Court challenges by state attorneys general and environmental advocates may block some of these rollbacks, but the overall effect is to dangerously abandon protections for Americans from environmental dangers — and, in many cases, to increase Koch revenues.

In the course of doing the bidding of the oil, gas, coal, and chemical industries, Pruitt has held numerous meetings with fossil fuel executives, and with Koch-connected business lobby groups like the American Legislative Exchange Council.

At the same time, key Koch operatives wield power now as top aides to Trump inside the administration.

White House legislative director Marc Short, one of the three White House staffers who attended the dinner with Trump and conservative leaders last week, is another former top Koch aide; until early 2016, he ran Freedom Partners, a Koch-created political donor network. Short reportedly presented Charles Koch in February 2016 with a detailed plan to stop Trump from getting the GOP nomination. Koch, according the National Review, was surrounded at the meeting by executives from Koch Industries; he recognized Trump’s momentum, decided to protect his business interests, and declined Short’s proposal. Short left to join the Marco Rubio campaign. But now Short, who also was once Mike Pence’s Capitol Hill chief of staff, is burrowed into the White House as one of Trump’s most powerful aides.

The Kochs also want things like getting rid of Obamacare and giving deep tax cuts to the wealthy — things that would require congressional action. The Trump team is trying to get those things as well, although, with an incompetent president, possessing horrible negotiating skills, at the helm, the administration is having trouble delivering. (The Kochs differ with Trump on immigration policy, but there, too, the administration’s efforts have met numerous roadblocks.)

The Koch network reportedly plans to spend some $300 to $400 million to support conservative candidates and issues in the 2018 election cycle.

In April, David Koch placed himself at dinner at Trump’s Mar-A-Lago club by tagging along with less-favored other brother William Koch, a Mar-A-Lago member.  The Koch boys strategically sat down at a table with close Trump pal and club member Christopher Ruddy, and David managed to have what Politico called “a friendly chat” with Trump. It was a powerful symbol of corruption in action — a president who was selling access to himself and a corporate titan, with enormous business interests subject to government action, taking advantage. But at this point David Koch’s effort to chat with Trump seems like it was just done for show, or for fun. The Kochs don’t need to lobby Trump, with Koch allies like Pence, Pruitt, and Short making the big administration decisions on their issues.

Trump may feel that he’s in charge of America, and that he will be taking care of things, believe me. But the real winners, at least so far, are the Kochs.