What The Five Ex-Presidents Should Say About Trump 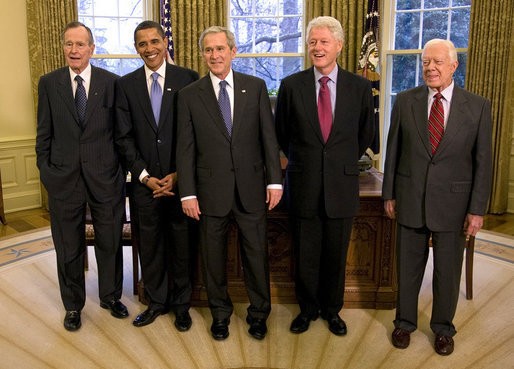 I don’t expect it anytime soon, but I wish former presidents Jimmy Carter, George H.W. Bush, Bill Clinton, George W. Bush, and Barack Obama would break all the ex-presidents rules and release a joint statement condemning President Trump as a disgrace to our nation. It would be the patriotic thing to do, and it would have the added advantage of being true. These ex-presidents have given Trump enough time to get straight, and he’s been every bit as dishonest, incompetent, and corrupt as it seemed he would be. The dangers to our country from Trump remaining in the White House are immense. I think Franklin Roosevelt would have said something by now. Certainly Eleanor Roosevelt.

Here’s what the five living ex-presidents might say, or at least what I came up with in 30 minutes. I encourage you to write your own version.

We are five concerned American citizens who each happened to serve in the past as President of the United States. We are aware that former presidents normally refrain from criticizing the current president. But this is not a normal time, and Donald Trump is not a normal president.

So today we are speaking together with one voice: Donald Trump is a disgrace to the office of President and to our country.

We respect that tens of millions of Americans voted for Donald Trump last November. Despite our concerns about Donald Trump, we hoped he would thrive in the role, and work to improve the lives of all our people. Instead, his presidency is causing immense harm to our country and the world.

Our motivation to speak now does not center on disagreements with President Trump about policy issues or values, although all of us have some such differences with him.

Instead, we are motivated to speak out because in office President Trump has demonstrated that he lacks the competence, judgment, maturity, and knowledge to do the job, and he appears to have no intention of, or capacity for, growing into the role.

We worry, too, that President Trump’s words and actions are driven by his own anger and intolerance, and his behavior in turn is inspiring hate, distrust, bigotry, and even violence in our country.

Also, President Trump has repeatedly threatened the media and encouraged a dangerous mindset among his supporters that any negative story about him is automatically “fake news.” He and his spokespeople have consistently made false statements to the American people. He has, in essence, threatened the very concept of truth.

We are concerned, as well, that President Trump’s refusal to separate himself from his business holdings is corrupting our democracy, inspiring comparisons to kleptocratic dictatorships.

Finally, while the investigation is ongoing, and press stories are not proof of guilt, we are distressed by the growing evidence that President Trump tried to interfere with the legitimate investigation of ties between his advisors and Russia — if proven, a serious abuse of power.

We return to where we started. We are but five U.S. citizens, and our views are worth no more than any other Americans as to this president or the future course of the country. But we can remain silent no longer.