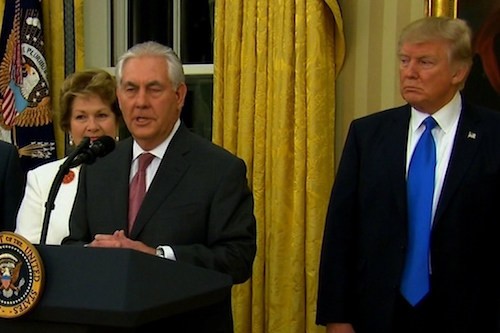 Donald Trump won the presidency by pledging to fight for the forgotten man and woman, the people left behind by corporate globalization and Washington corruption. But it’s clear now that it was simply another false promise from a career con artist.

This morning, when Trump’s Secretary of State, Rex Tillerson, arrived to start work, what was left of the president’s broken promise was smashed to bits.

It was already bad enough that Trump is filling his cabinet with predatory capitalists like Andy Puzder and Steve Mnuchin, who have thrived by, respectively, abusing workers and evicting homeowners, and filling his team with long-time lobbyists for big corporations.

Worse, Trump is turning our American Democracy into American Kleptocracy.

He set the tone by ignoring the views of top ethics experts and refusing to divest from his businesses, just as his companies leverage Trump’s new status in order to sell Trump-branded hotel rooms and club memberships. After he was elected, Trump repeatedly brought up his business dealings on calls with foreign leaders and bragged in public about huge overseas business opportunities he was offered, and, he claimed, he had the legal right to take — like it was killing him that he wasn’t accepting. Trump’s presidency will make big money for Trump’s businesses. He knows it, and he likes it.

The corruption of our new government radiates from Trump. He wants to turn over education policy to Betsy DeVos and Jerry Falwell Jr., each of whom has a major financial stake in education enterprises. Trump’s designated Health and Human Services secretary, Representative Tom Price, misled the Senate about a sweetheart insider stock deal he got on a biotechnology stock, even as he voted in the House on health policy issues.

This morning our American Kleptocracy got much, much worse. Rex Tillerson has no diplomatic experience. Instead he spent his entire 41-year career at the giant multinational oil and gas company ExxonMobil, rising to be the CEO in 2006.

Unlike Trump, Tillerson has divested himself from his company. But he ignored the requests of Democratic senators that he recuse himself from matters relating to Exxon during his tenure. Instead, Tillerson offered only a one-year recusal.

In his wholly unpersuasive Senate confirmation hearing, Tillerson displayed little sophistication about international issues. And he was evasive, offering misleading statements about Exxon lobbying, and refusing to discuss the allegations — the basis of ongoing investigations by the New York and Massachusetts attorneys general — that Exxon misled the public about climate change.

Amid all these concerns and others, Tillerson was confirmed by a vote of 56-43, getting by far the most “no” votes of any Secretary of State nominee in U.S. history. (The previous record was a mere 13 against Rice.)

But far from chastened by the criticisms that Tillerson received, including from a few Senate Republicans, Tillerson and Trump are now embarking on an agenda that will sacrifice U.S. national interests and security but will meet the demands of big fossil fuel companies, most notably Exxon Mobil — to the benefit of Tillerson’s former employees, board members, and investors.

Trump has issued executive orders to move ahead with the Keystone XL pipeline, which the Obama Administration blocked out of concerns about climate change, and the Dakota Access pipeline, which the Obama Administration delayed in the face of protests by the Standing Rock Sioux Tribe and their supporters, who contend the project will contaminate water and damage sacred burial sites. Exxon is invested in Canadian tar sands projects that could benefit from new pipelines carrying crude oil.

Republicans in Congress are moving to repeal the landmark bipartisan Cardin-Lugar anti-corruption law, which requires oil, gas and mining companies to disclose details of the payments they make to foreign governments in order to obtain drilling and mining rights.  The purpose of this 2010 law is that deter the bribery and corruption by fossil fuel interests that has enriched foreign dictators and harmed poor citizens of developing nations. One of the fiercest foes of Cardin-Lugar has been ExxonMobil.

Similarly, Tillerson’s record at Exxon is one of subordinating human rights and anti-terrorism concerns to lucrative business deals.  Such bedrock elements of U.S. policy could be weakened by Tillerson’s narrow, business-focused view of the world.

Next up could well be the lifting of sanctions imposed on Russia by President Obama in response to Vladmir Putin’s aggression in Ukraine and interference in the 2016 election to favor Trump. Trump’s frequently-professed admiration for Putin, and the ties between Russia and Trump’s national security adviser, Michael Flynn, now the subject of a Justice Department investigation, are suggestions that Russia may get more gentle treatment from the new U.S. regime. Perhaps the biggest beneficiary of such a policy shift: Exxon Mobil.

Despite Tillerson’s denials at his hearing, Exxon lobbied to lift the sanctions, which blocked progress on the 2011 agreement that Tillerson and Exxon reached with Rosneft, Russia’s state oil company, to explore and drill for oil in the Siberian arctic, a deal worth tens or even hundreds of billions of dollars. In pursuing the deal, Tillerson developed strong personal ties to Rosneft head Igor Sechin, an ex-KGB agent close to Putin, and in 2012, Russia awarded Tillerson one of its highest honors, the Order of Friendship decoration. When the Obama Administration imposed the sanctions on Russia, and on Sechin personally, in the wake of Russia’s actions in Ukraine, Tillerson responded by expressing opposition to U.S. economic sanctions.

Finally, there is U.S. policy on climate change, as the overwhelming evidence of rising temperatures and eroding coastlines, spurred by the burning of fossil fuels, threatens human survival.  Asked at his hearing by Senator Ed Markey (D-MA) whether the Trump administration would honor the Paris climate agreement aimed at slowing this menace, Tillerson said only that his State Department would conduct a “fulsome review” of the issue and that there would be “no space” between him and Trump on the issue.  Which was hardly reassuring, as Trump has labelled climate change a hoax. A top Trump EPA transition advisor, Myron Ebell, told a London conference this week that he expected Trump to withdraw the U.S. from the Paris accord within days.

Although Tillerson at his hearing acknowledged that “the risk of climate change does exist, and the consequences could be serious enough that action should be taken,” he added, “Our ability to predict that effect is very limited,” and then told us what he really thought: “I don’t see it as the imminent national security threat that perhaps others do.” Those others include the leftists at the U.S. Department of Defense.

With a designated new EPA head, Oklahoma attorney general Scott Pruitt, who has raised millions in support from fossil fuel interests and has repeatedly argued for the same positions as Exxon, the Trump team also appears poised to overturn Obama domestic rules aimed at curbing climate change and protecting our communities from toxic pollution.

These new or looming Trump policies are weak on human rights, bribery, Russia’s dictator, climate change, pollution, and U.S. national security. They are, however, the kinds of policies favored by the multinational oil company ExxonMobil, which generously donated $500,000 to help pay for the Trump inauguration. And now they can be implemented by the man who was running ExxonMobil until last month, Rex Tillerson.

Your government has been stolen from you.