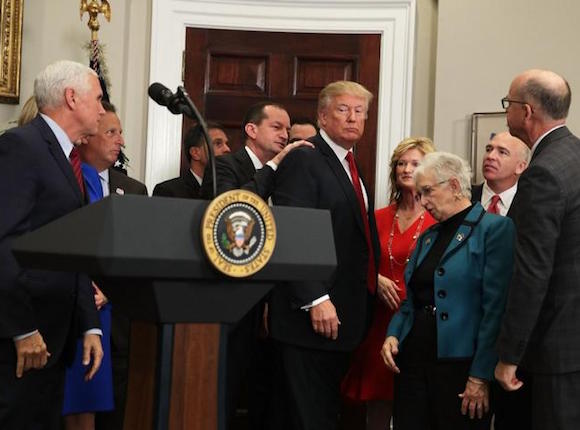 Donald Trump is darn angry and unhinged. He’s insulting his own cabinet members, malevolently tearing down health care, imperiling national security, acting as if Puerto Rico, where conditions remain bleak, is part of the Lesser Antilles. He hasn’t accomplished a single positive thing. He’s made the world much more ugly.

Is there any way to get him away from us? Trump reportedly doesn’t even know what the 25th Amendment is, and it doesn’t matter, because Mike Pence is not gonna lead a mutiny. Nor, with a GOP Congress, is impeachment likely, no matter how many crimes Bob Mueller finds. The FCC can’t revoke Trump’s president license. And he won’t resign; no matter how miserable he is in the job, he’ll stay — out of spite, to avoid humiliation, and to get a lot of free stuff.

But we should have some big mass rallies to demand his resignation anyway. Because Serial Presidor Trump, the Harvey Weinstein of resort properties, is a disaster, a dotard, and, yes, a disgrace.

At least $60 million in dealings with one of the Russian oligarchs closest to Putin.

Entitled, sheltered Betsy DeVos has been week-by-week trashing protections for the victims of predatory for-profit colleges — broke veterans, single moms, people of color, immigrants, who were seeking better lives through education, only to be deceived, abused, and left worse off by greedy, crooked college operators. DeVos, who has personal investments in for-profit education, has viciously insulted students in the process.

On Friday the VA listened to veterans organizations and other advocates for students and cancelled a rule that would have given VA employees unchecked ability to make money working with, or even owning, for-profit colleges. That was smart, because such blatant conflicts of interest might have driven even more vets to predatory schools. By contrast, DeVos hasn’t shown even once that she’s listened to concerns from veterans and students about abusive for-profit colleges.

Pruitt is the entitled servant who is allowing the fossil fuel industry to run environmental policy. A new PBS Frontline documentary lays out how Pruitt is doing whatever the industry wants, and shoving science and public safety aside. It was no surprise at all last week when Trump nominated long-time coal lobbyist Andrew Wheeler to be Pruitt’s deputy, and picked to run the White House’s own environmental office Kathleen Hartnett White, a former Texas official who has rejected the science behind climate change and argued that carbon dioxide is the “gas of life” and shouldn’t be regulated. It was not a surprise, but it was still disgraceful.

Pence walked out of a Colts game because 49er players were peacefully protesting racism, yet walked into a Koch event at a New York hotel to display fealty to the billionaire brothers — see 2 below — who have been polluting the country and increasing the dangers of global warming. And, just generally, the guy is a disgrace, validating, enabling, and humoring the despicable, low-IQ Trump so he can advance the GOP agenda of helping wealthy corporations and lobbyists dominate Washington, and his own agenda of allowing bigoted Indiana bakers to avoid gay weddings.

The director of the National Background Investigations Bureau testified at a congressional hearing about Kushner’s disclosure documents and said he has never seen so many errors on a security clearance form. Kudos to Jared and Ivanka’s “ethics” lawyer, powerful DC Democrat Jamie Gorelick. The apparent errors were far from benign. Beyond the repeated failures to report contacts with Russians, it emerged last week that Kushner failed to disclose his ownership interest in Cadre, a real estate tech business that raised millions from investors after Jared joined the Trump White House. As Newsweek concluded, “The timeline suggests more than just an inadvertent oversight, but an effort by Kushner to hold onto Cadre rather than be forced to divest his interests in the emerging company, according to ethics experts.”

Bannon, ousted from the White House in this summer’s reorganization/bloodbath, is now on the road trying to elect supposedly more populist, but mostly just nuttier, Senators, and seeking to become his own compelling reality celebrity. The extreme libertarian Robert Mercer has bankrolled Bannon’s angry, bigoted, paranoid, incoherent nationalist agenda through Breitbart and the Trump 2016 campaign. Working together, the Mercers and Bannon helped elect an incompetent who then hired the swampiest Goldman Sachs bankers and fossil fuel lobbyists. While Bannon’s agenda has been expressed through blustery Trump pronouncements on immigration, trade, Nazi marches, and the NFL, most of the policy changes actually moving ahead in fact harm working Americans and aim instead to enrich the wealthiest people in America. In that regard, although Bannon got little for his effort to aid Trump, the Mercers are benefitting bigly, as are their long-time allies…

The Kochs know Trump is disgraceful, imperils national security, disagrees with them on some key issues, and is contemptuous of them. They tried to stop him for a while. But they didn’t try too hard, once it became likely he was going to win. And now they, like their allies Mitch McConnell and Paul Ryan, put up with Trump’s ugliness, and even suck up to him, because they are getting everything they want: A wish list of favors and deregulation for the fossil fuel and chemical industries, carried out by industry lackeys Scott Pruitt, Ryan Zinke, Rick Perry; plus big budget-busting tax cuts for the rich, i.e. them. Mike Pence’s trip to a fancy hotel in sinful Manhattan last week to kiss the Koch ring at their donor network summit confirmed who’s really the boss now.

And this morning, in two tweets pushing back on the idea that he’s gotten nothing done, Trump basically admitted that most of his semi-achievements involve helping big swampy corporations — especially the fossil fuel industries — not the forgotten working American.

How much more contemptible can one man be?  The answer ain’t blowing in the wind.

Trump really doesn’t believe, or accept, that Puerto Rico is part of the United States. He still seems to think what’s going on is a charity mission to a loser foreign country. As the 3.4 million Americans there swelter without water, electricity, and other necessities, Trump whined / threatened on Twitter, “We cannot keep FEMA, the Military & the First Responders, who have been amazing (under the most difficult circumstances) in P.R. forever!” He further opined that Puerto Rico had already faced a financial crisis “largely of their own making,” showed “a total lack of accountability,” and had an infrastructure that “was disaster before hurricanes.”

Trump’s hostile, racist attitude toward Americans in dire conditions should be grounds for impeachment by itself. (Someone on the staff obviously leaned on Trump to offer a course correction after Puerto Rico’s governor called the White House, because Trump tweeted the next day about the “wonderful people of Puerto Rico,” adding, “I will always be with them!”)

After NBC reported that Trump had told his military advisers he wanted a tenfold increase in nuclear weapons, Trump showed once again that no one loves the First Amendment more than him, tweeting, “Network news has become so partisan, distorted and fake that licenses must be challenged and, if appropriate, revoked. Not fair to public!” It would be scary to hear an American president making a pronouncement akin to one by an authoritarian leader like Vladimir Putin, Nicolás Maduro, or Recep Tayyip Erdoğan — if, in fact, this president had any juice. Our media and our courts won’t be intimidated by this fool, and that’s some of the best news we have right now.

Unable to craft, pass, or even understand a health care bill, Judeo Christian Values Trump made two crucial moves to sabotage Obamacare, imperiling the health of millions of vulnerable Americans. Mixing inhumanity with incompetence, Trump, for at least the second time in office, scampered toward the door and had to be reminded by butler Mike Pence to sign the offending executive order.

While cutting health care for the poor, Trump pursues cutting taxes for the rich. In a speech, he promised to end “the crushing, horrible estate tax, sometimes known as the death tax” — a tax “reform” that would benefit only estates worth more than $5.49 million for an individual or $11 million for a couple. He made the promise to an audience of truckers, a group that earns about $40,000 a year. Late last month, Trump claimed ending the estate tax would “protect millions of small businesses and the American farmer.” In fact, there will be about 5,500 estates in 2017 subject to the tax, and only 80 of those are from farms and small businesses. None are truckers. Even Trump super-flunky and U.S. Treasury Secretary Steve Mnuchin admitted last week, “Obviously, the estate tax [cut], I will concede, disproportionately helps rich people.”

President of the Virgin Islands Trump also falsely declared that Iran was not complying with the nuclear deal. Trump spat on the deal without actually withdrawing. His top national security advisers and our allies want us to keep the agreement, and he has no alternative plan to protect against the threat; he only has his usual claim that he can make a better deal, despite the fact that, as president, he hasn’t successfully negotiated anything.

Each week, by refusing to divest from his businesses, Trump advances the transformation of our nation into a grotesque kleptocracy. Trump is supposedly a billionaire, and claims he’s really generous, yet he’s making big money off taxpayers whenever he goes on one of his golf weekends, charging Secret Service and other government officials for staying at his properties.

On the pure moron front, while Randy Newman was kidding around with “Short People,” Trump truly has extended his bigot brand with his repeated mocking of low-height foes, from “Little Marco” Rubio to now “Liddle’ Bob Corker.”

And Trump insisted that Rex Tillerson didn’t call him a “moron,” but he nonetheless publicly challenged his Secretary of State to an IQ contest. Then, Trump eloquently — not! — explained on Fox News’s “Hannity” that the increase in the stock market “maybe in a sense” is reducing the national debt. In addition to suggesting we might want to bet on Rex in the IQ contest, Trump’s financial analysis makes you wonder what they teach at that Wharton School of Business, and how it’s always ranked so high.