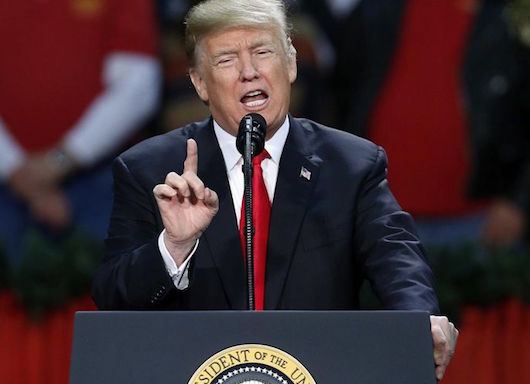 On the heels of the Senate’s massive tax giveaway to the ultra-rich, the tilt by Mitch McConnell and other establishment GOP senators toward awful bigot and accused predator Roy Moore shows that the Republican Party has become a disgracefully dirty alliance between corporate interests and malicious people, with corrupt businessman / accused predator Donald Trump its poster boy. Tremendous.

Permanent spoiler alert: We can’t imagine anyone other than Donald Trump, Sr., ever occupying the top spot in the rankings. But we won’t get tired of him winning. Believe me.

Motivated to continue his sustained suck-up to Trump not only because his wife was made ambassador to the Vatican but also because he’s paid by the for-profit college industry to lobby the administration, Gingrich this week told Fox News’s Laura Ingraham, “Mueller is corrupt. The senior FBI is corrupt. The system is corrupt.”  In May, Gingrich called Bob Mueller a “superb choice to be special counsel” whose “reputation is impeccable for honesty and integrity.”

While POTUS was turning over hallowed national lands to mining interests at Zinke’s recommendation, we were learning that the free-spending-on-himself Secretary of the Interior spent $14,000 on helicopter rides in the DC area this summer so he could attend (1) the swearing-in of his head-butting congressional successor Greg Gianforte and (2) a horseback riding date with VP Pence.

DeVos hasn’t bothered to stop by any of the seven sham meetings so far where entitled representatives of the for-profit college industry sit around a table devising how to dismantle the Obama education rules so they can go back to earning billions without any accountability for harming veterans and low-income students. (Meanwhile, DeVos’s brother Erik Prince has reportedly teamed with Iran-contra scammer Oliver North to pitch a private global spy network to the Trump administration.)

On the heels of Hatch shepherding the disgraceful Trump tax scam bill for the ultra-wealthy, and Trump scaling back the national monuments in Utah, as Hatch urged, the Senate Finance chairman this week abandoned his previously-expressed concerns about Roy Moore’s bigotry and alleged sex crimes. The Utah senator said Trump “needs every Republican he can get so he can put his agenda through.”

Dishonorable mention: Senator Chuck Grassley (R-IA), who defended one aspect of the tax giveaway by saying, “I think not having the estate tax recognizes the people that are investing, as opposed to those that are just spending every darn penny they have, whether it’s on booze or women or movies.”

Don Jr. went up to Capitol Hill and reportedly claimed that his discussions with My Father to make up a fake story regarding the Trump Tower meeting are protected by attorney-client privilege. Meanwhile, there was new evidence that the meeting discussed what publicist Rob Goldstone promised it would: dirt on Hillary. And do you remember that big game hunter Don Jr. was the biggest booster for Ryan Zinke to be Interior Secretary?

The buffoonish loud-lunching legal duo had another stellar week.

After Mike Flynn pled guilty, outside lawyer John “Sure I Forward Conspiracy Theory emails” Dowd incompetently worked with Trump to craft a tweet that unintentionally enhanced Bob Mueller’s obstruction of justice case. Many say Dowd is just taking the fall for Trump by falsely claiming authorship, but I thought from the beginning the tweet was written with the input of a lawyer – just not a smart one. Having effed up real bad, Dowd responded by positing a monarchy for the USA,  pronouncing that the “President cannot obstruct justice because he is the chief law enforcement officer” under the Constitution.

Meanwhile, White House special counsel Ty “Mueller Will Clear POTUS by Thanksgiving” Cobb issued a disgraceful post-plea statement referring to Flynn as a “former Obama administration official,” which is so absurd that no one will be fooled (I guess other than the entire Fox News, Breitbart, Gab and other audiences and everyone they hang with out). General Flynn was for two years in the Obama administration the director of the Defense Intelligence Agency, a post almost always occupied by active-duty military officers, which is what Flynn was. In other words, Flynn wasn’t exactly at any 2008 Hope and Change rallies. In fact, Obama fired Flynn, and after the election emphatically warned Trump not to hire the angry general, who chanted “Lock Her Up” at Trump rallies.

Flynn, like Trump, apparently saw the White House as an enormous business opportunity: He was reportedly — on the dais, during the damn inaugural address — texting to an associate about the nuclear power plant deals that would be possible after Russia sanctions quickly got “ripped up.”

(according to multiple accusers)

“Go get ’em, Roy!” the White House’s serial predator told his Alabama protege on the phone Monday. By Friday night, Trump was holding an ugly campaign rally in Pensacola, FL, shouting “get out and vote for Roy Moore” into the Mobile, Alabama, TV market.

The slurring POTUS made Middle East peace with Sheldon Adelson, and virtually no one else.

After ABC News suspended Brian Ross for reporting incorrectly that Trump, when he was running for president, at one point told Michael Flynn to contact the Russians — when in fact Trump gave the direction when he was president-elect — Trump issued this ultra-stupid tweet: “People who lost money when the Stock Market went down 350 points based on the False and Dishonest reporting of Brian Ross of @ABC News (he has been suspended), should consider hiring a lawyer and suing ABC for the damages this bad reporting has caused – many millions of dollars!”

There have been thousands of press reports on Trump this year. A handful had errors, and those were quickly corrected and reporters disciplined. Meanwhile, it’s fully documented that Trump has told hundreds of lies as president, and he’s never corrected one. #fakenews

The sheer volume of Trump’s lies is staggering, but also notable is how many of his lies are in service of attacking other people.

Also: the destruction of our national monuments, the lies about the tax bill, the false revisionist history about Flynn, the attacks on the Mueller probe, the claim that the FBI’s reputation is “in Tatters.” And the presidential endorsement of Brian Kilmeade’s book on Andrew Jackson — “Really good.”