posted at 7:05 am by David Halperin 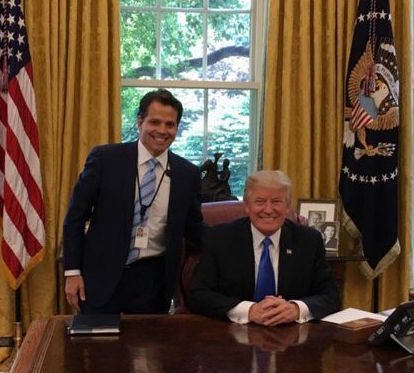 Republic Report, which focuses on how money corrupts democracy, has met its abusive dream mate with the kleptocratic administration of President Donald J. Trump. Trump and his lieutenants personify how money and greed, mixed with disrespect for constitutional freedoms, know-nothing ignorance, serious bigotry, and an endless capacity for lying, can really, really corrupt democracy.

This week, seriously, we just don’t have time to write this feature for the eighth straight week. We have a job, and also guests in town. But the Trump team has been awfully disgraceful lately, so we moved this feature up a couple days.

Permanent spoiler alert: We simply can’t imagine anyone other than Donald J. Trump ever occupying the top spot in the rankings. But we won’t get tired of him winning. Believe me.

Looking back on a legacy: Stealing that mini-fridge from junior staffers, ratifying Trump lies starting with crowd size, remembering the Holocaust Centers, and quitting, not on principal, but because he didn’t like his new boss (see 5 below).  We feel kinda bad that Trump didn’t let Spicer meet the Pope, or tell him before he hired Scaramucci (see 5 below), or otherwise treat him like a human being. But we don’t feel too bad, because Spicer had to know what he was getting into. Shalom chaver.

He shows no mercy for 30-years-in-America immigrants, cannabis-needing cancer patients, and others facing his dragnet, but he can keep misleading authorities about Kislyak meetings and that’s just fine. Slightly less disgraceful than in previous weeks because he’s gotten under the skin of Donald Trump (see 1 below).

This pair has brought big-time climate change denial to Interior. Swift, who came to Interior after her Capitol Hill boss, Rep. Ryan Zinke, was named Secretary, nixed the participation of two Glacier National Park climate experts in a team set to guide a visit to the Montana park by Facebook CEO Mark Zuckerberg, according to sources cited by the Washington Post. This hiding of park climate experts follows Zinke’s decision to reassign the Department’s top career climate policy official, Joel Clement, to the revenue collection unit; Clement last week filed a whistleblower complaint.

ExxonMobil was fined $2 million this week by Treasury for violating Russian sanctions while Tillerson was CEO — a stark reminder that before he was a bumbling SecState, he ran a giant business that worsened global warming, while hiding the truth about it.

Six months of non-stop Trump stupid, and this what Pence has to say: “It is the greatest privilege of my life to serve as vice president to a president who is fighting every single day to restore an America of freedom, prosperity and opportunity for all. So with boundless faith in the American people, with faith in President Trump’s vision and determination, and with faith in God who has ever watched over this Land of the Free and Home of the Brave…” etc. This is the guy we’re all hoping will become president soon.

Out of the gate, Mr. “I love the president” has engaged in grotesque sycophancy, appearing ready to feed Trump’s worst instincts in order to move to the center of power. He suggested to the White House press room that Trump was the greatest athlete since… ever.

His first interview in the new job: Breitbart.

On CNN’s “State of the Union,” Scaramucci cited the argument of an anonymous expert that if it had been the Russians who hacked the U.S. election, we never would have found out, because the Russians are so smooth at hacking. Pressed by host Jake Tapper as to the identity of the expert, Scaramucci said: It was Trump. [UPDATE 07-24-17 9:55 pm: Adding to the disgracefulness, it turns out Trump got that talking point from Vladimir Putin.]

Among many tweets that Scaramucci deleted this week because they clashed with the opinions of Donald Trump is one that said it was possible “to combat climate change without crippling the economy” and added, “The fact that many people still believe CC is a hoax is disheartening.” No longer disheartening, I guess, now that you work for the climate denier-in-chief.

Also, his absurd, repeated bragging about his résumé (e.g., “since I went to Harvard Law School…”).

DeVos told the corporate front group ALEC’s big meeting that Obama-era rules to protect students from (ALEC member) predatory for-profit colleges were “textbook overreach… solely to advance their administration-wide war on every type of organization they didn’t like.” Like she’s an expert on textbooks.

Now, Pruitt may be on the verge of bringing a new, like-minded friend to EPA: Axios reports that coal lobbyist Andrew Wheeler is likely to be named as the number two official at the agency. Wheeler is a top lobbyist for Murray Energy, whose CEO Bob Murray called in January for criminal charges against President Obama. Murray is the guy who often sues people, including John Oliver (and my client Mike Stark), who talk about him.

UPDATE 07-24-17 9:45 am: Pruitt traveled to his home state of Oklahoma 10 times from March through May, largely at taxpayer expense. He spent 43 out of 92 days in the state or traveling to or from there.]

The supposedly-liberal/sorry-not-liberal Trumpets, aided by their supposedly ace lawyer, Democrat Jamie Gorelick, continue updating their financial and security disclosure forms to list enormous assets and Russia meetings they hadn’t mentioned before. (And yet the Chinese call Jared “Mr. Perfect.”)

Among other things, he asserts that, before attending the June 2016 Trump Tower meeting with various Russians, he didn’t read the email that Donald Trump Jr. sent him, entitled “Subject: FW: Russia – Clinton – private and confidential,” and describing an offer to provide incriminating information about Hillary Clinton from the Russian government. He says that when it came to filling out his security clearance form, and subsequently amending it, that meeting didn’t occur to him, and he finally disclosed it “even though my attorneys were unable to conclude that the Russian lawyer was a representative of any foreign country and thus fell outside the scope of the form.”

Kushner also claims it was Russian ambassador Sergey Kislyak, not him, who suggested a back channel between the Russians and the Trump transition at a December 2016 meeting. And he writes that in his subsequent meeting with Sergey Gorkov, a former Russian intelligence agent who is now the Putin-appointed head of the Russian state-owned bank Vnesheconombank, sanctions against Russia were not discussed, and nor was “there any discussion about my companies, business transactions, real estate projects, loans, banking arrangements or any private business of any kind.”

We’ll see how Kushner’s accounts hold up in response to questions from the committees. Or rather, we won’t, because both sessions will be behind closed doors.

And that was just the New York Times interview and a couple of tweets.

[Editorial interjection: The threat of pre-emptive pardons and of firing Mueller is real and stark and demands a nonpartisan mobilization right now.]

Trump appeared at the kickoff of his disgraceful new electoral commission, created for the sole purpose of justifying Trump’s lie about millions of illegal votes cast — but with the potential effect of knocking millions of legitimate voters off the rolls. Maybe newly-paroled O.J. can petition the commission to also search for the real killer.

Trump also started his new communications director on the right foot by pushing his / Putin’s theory (see 5 above) that Russia couldn’t be behind the election hack, as U.S. intelligence agencies overwhelming concluded, because the Kremlin would have been able to do so without detection. Scaramucci reported on CNN that Trump “basically said to me, ‘Hey you know, this is, maybe they did it, maybe they didn’t do it.'”

Hey, you know, maybe Trump is a disgrace for denying an existential threat to our democracy in order to soothe his insecurities. Yeah, he is.

We have this week’s winner.

Trump is again number one — the most disgraceful figure in the Trump administration — in the Trump Terrible 10. Trump is not merely a disgrace; he’s a total and complete disgrace.