posted at 7:46 am by David Halperin 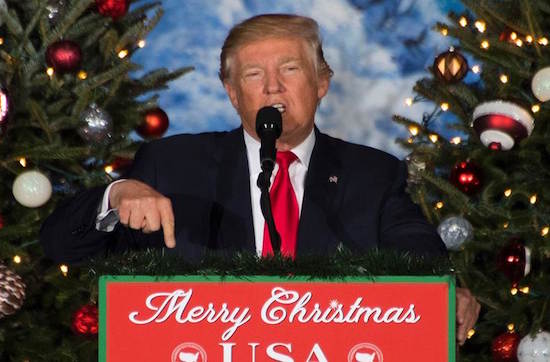 Happy holidays from all of us at Trump Terrible 10!  If you’re like us, you’ve been spending your holiday time eating, watching Fox News, playing golf at your emolument, insulting people on Twitter, and treating your relatives and guests poorly, except when you were giving them a tax cut. For all you believers, Merry Christmas. And for all you heathen haters, a forced Merry Christmas. We wish all of you the best this year. We wish you the best presidential impeachment ever.

Junior addressed a Palm Beach meeting of the right wing youth operation Turning Point — which was exposed last week for racial bias and apparent abuses of election and tax laws — and he tried to drive the youth into a state of paranoid delusion, describing the Mueller Russiagate probe as follows: “There is, and there are, people at the highest levels of government that don’t want to let America be America.” This was the same Donald Trump Jr. who gleefully took a meeting last year with Russians promising Kremlin dirt on Hillary Clinton, and who enthusiastically emailed with Wikileaks. Was that what he meant by America being America?

The former GOP congressman got caught red-handed lying to a reporter, and responded by lying about having just lied.

Federal prosecutors in Brooklyn reportedly have subpoenaed records related to Kushner’s real estate business from Deutsche Bank, which has lent hundreds of millions of dollars to the Kushners. As luck has it, there’s a space in the Orthodox wing at FCI Otisville now that Sholom Rubashkin has been released.

The large gift boxes full of horse manure that a guy delivered to their Beverly Hills and Bel Air mansions was a nice holiday gesture, but could not possibly capture how execrably Mnuchin and Linton have behaved this year — flaunting their wealth while pushing for a grotesque tax transfer of billions from working Americans to themselves, to Trump, and to the other wealthiest and greediest among us.

DeVos’s Department of Education announced a cynical scheme to limit debt relief to students who have been defrauded and abused by for-profit colleges — a plan that will harm taxpayers as well as students, but aid friends of the Trump administration who own dishonest, predatory schools. And then her appearance to face questions before the House Education Committee — which would have been her only testimony before the committee this year — was inexplicably cancelled.

Pruitt continues to spend EPA’s money on guarding himself from his own staff, while he works to drive out the agency’s most competent experts. Pruitt is deliberately destroying our climate and environment in order to benefit the wealthy fossil fuel and chemical companies that have bankrolled his career.

Fox News’s all-day, every-day attacks on Robert Mueller and the FBI, with the apparent thesis that the Justice Department is totally corrupt, at least until it is purged of all registered Democrats (while Republicans, besides Mueller, are maybe OK), has been whipping viewers, especially the White House’s Viewer-in-Chief, into a frenzy. Long-time Trump pal Judge Jeanine tells her audience that FBI and Justice officials “need to be taken out in cuffs,” while another Murdoch outlet, the Wall Street Journal, calls for Mueller’s firing. Pirro went to the White House at some point to incite Trump in person, while Murdoch reportedly provides regular telephone advice to the angry POTUS. Trump has now welcomed Murdoch’s anticompetitive sale of media properties to Disney, while attacking, in parallel with the Justice Department, the comparable AT&T-Time Warner/CNN deal. 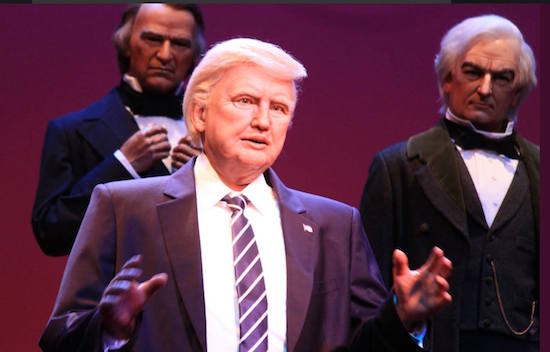 Trump signed a tax bill that abandoned all his promises to help working and middle class people. While he continues to insist in public that forgotten Americans are the prime beneficiaries, CBS reported over the weekend: “President Trump kicked off his holiday weekend at Mar-a-Lago Friday night at a dinner where he told friends, ‘You all just got a lot richer,’ referencing the sweeping tax overhaul.” Most Trump voters just got scammed by a con man.

Trump ramped up his vile, obstructive attacks on the FBI that is investigating him, his family, and his cronies.

And the New York Times reports — in case you missed it — that during an Oval Office meeting last summer on immigration matters, our disgusting White Supresident said that Haitians “all have AIDS” and that once Nigerians saw the US they would never “go back to their huts” in Africa. Donald Trump is just an old Queens bigot — Archie Bunker in an orange wig, but less well informed and without Archie’s late-in-the-episode heart.