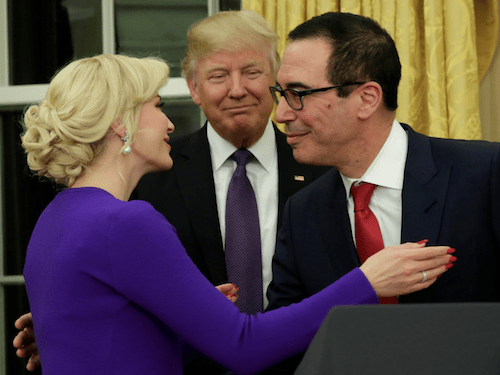 Permanent spoiler alert: We can’t imagine anyone other than Donald J. Trump ever occupying the top spot in the rankings. But we won’t get tired of him winning. Believe me.

Shulkin is supposed to be the one of the few good Trump cabinet members. But this week, his VA approved horrible predatory for-profit Ashford University’s sneaky effort to change its state-based eligibility for veterans’ education benefits to Arizona, after Iowa tossed the school out for bad behavior. Ashford is owned by Bridgepoint Education, where Robert Eitel, who now drives for-profit college policy for Secretary of Education Betsy DeVos, worked until April.

The VA also proposed a new rule that would waive the legal obligations of all agency employees not to receive payments from, or own, for-profit colleges — opening the door for particularly insidious corruption of officials who are supposed to be protecting veterans from college ripoffs.

9. Omarosa Manigault, Assistant to the President and Director of Communications for the Office of Public Liaison. Last week’s ranking: ―

Is this devastating account of Manigault’s “behavior and work ethic,” quoting anonymous West Wing sources, confirmation that she is a nightmare, or a result of the fact that she is almost the only African-American in the White Trump White House? Probably both.

Sanders claimed, falsely, from the White House podium that it was “pretty clean and clear” that former FBI Director James Comey broke the law by leaking unclassified FBI memos he wrote. She declared from the same podium that ESPN host Jemele Hill committed a “fireable offense” by calling Trump a white supremacist.

Apol is the federal ethics office’s long-time general counsel, now running the show after previous head Walter Shaub was shoved out by the Trump team for being too diligent. Under Apol, OGE has reversed an agency policy and now says lobbyists may give anonymous donations to legal defense funds for Trump aides being investigated in the Russiagate probe. Shaub says that before he left OGE, Apol was talking with the Trump White House attorneys about changing the rule to allow such gifts.

[UPDATE 09-17-17: The Politico report on which I based this item reported that OGE declined to comment on Walter Shaub’s characterization of the office’s action. But on Friday, Elaine Newton, Alternate Press Liaison at OGE, emailed HuffPost, where I cross-post many articles, to dispute the account. HuffPost forwarded Newton’s message to me today, and this is it: “The article provides inaccurate information concerning the U.S. Office of Government Ethics (OGE). The OGE policy on anonymous contributions has not changed, it is the same as when former Director Shaub left the agency. The note posted on the 1993 OGE opinion was changed only to clarify that the main part of the advisory was still valid and to expressly encourage people to contact OGE before establishing a legal defense fund. OGE has been, and is continuing to, recommend that any legal defense funds include language prohibiting anonymous contributions.”]

It’s now been reported that Trump called Sessions “an idiot” right after he learned that Deputy Attorney General Rod Rosenstein had appointed Robert Mueller as Russiagate special counsel. Sessions also has endured being called “weak” by Trump on Twitter. And this week Trump has endlessly undercut Sessions gleeful announcement that DACA was dead. But Sessions hangs in, reportedly to fulfill his dreams of deporting every undocumented immigrant and unreforming the criminal justice system.

DeVos’s embrace of predatory for-profit colleges is breathtaking; pressed by Trump crony Newt Gingrich, DeVos is rapidly destroying all the reforms made by the Obama administration to protect students and taxpayers against college ripoffs that prey on veterans, single moms, and others striving to build a better future. Most recently, DeVos simply ignored a court order that she decide a defrauded student’s claim for debt relief by a September 7 deadline; her Department hasn’t resolved a single such claim since taking office.

Now ACICS, the asleep-at-the-switch accrediting agency for many of the worst for-profit colleges, wants to reverse a decision by the Obama administration that ended its role as a gatekeeper for taxpayer-funded student aid, and the group says it has “begun communicating with the Department of Education” about how it’s turned over a new leaf.  Don’t be surprised if DeVos believes them.

Mnuchin asked to use a $25,000/ hour government jet for his European honeymoon. His infamous Kentucky day trip on a government jet with new wife Louise Linton provided a premium opportunity to view the solar eclipse. Knowing full well that he was prohibited by law from promoting private interests while in office, he still couldn’t help but tell an interviewer in March that everyone’s kids should see The Lego Batman Movie, in which he has a financial stake. And his main job is pushing the Cohnuchin tax “reform” gift for the wealthy, a group that Linton has made clear she and Mnuchin are part of. Is Mnuchin’s $300 million fortune so small that he needs to keep finding ways to make or save money while in office?  Or is his sense of entitlement so profound that he just grabs at whatever he wants?

The deadly wrecks of Harvey and Irma are what climate change looks like. Yet Scott Pruitt, bound to his polluting patrons, has done nothing but cancel government efforts to fight climate change. When CNN asked him about this concern, Pruitt got all indignant: “To use time and effort to address it at this point is very, very insensitive to this people in Florida.” The Republican mayor of Miami was one of many who vehemently disagreed. It’s Pruitt who is exploiting the tragic suffering from these storms to evade the urgent need to change course.

While dancing with Democrats on DACA, our White Supresident returned to discussing Charlottesville yet again, reaffirming his disgraceful view that good folks were part of a Nazi/Klan march.