posted at 7:27 am by David Halperin 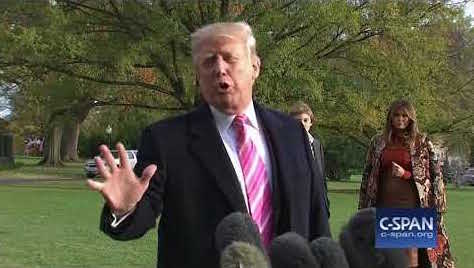 This was the week that the President of the United States told voters to choose an accused pedophile and disgraceful bigot to be Alabama’s next U.S. senator. Trump can’t sink any lower.  Or can he? I’ll be letting you know next week.

Permanent spoiler alert: We can’t imagine anyone other than Donald Trump, Sr., ever occupying the top spot in the rankings. But we won’t get tired of him winning. Believe me.

Holy man Johnson, who was appointed by then-DHS secretary John Kelly, resigned after CNN reported that as a radio host in 2008, he said, “America’s black community… has turned America’s major cities into slums because of laziness, drug use and sexual promiscuity.” In another radio appearance, Johnson said that Islam’s only contribution to society was “oil and dead bodies.” Shades of William Bradford!

It’s not just that Pence regularly says things that he knows are untrue or has no idea idea are true; it’s the smug way he says them. Like when he was asked on Fox News, on October 14, 2016, if the Trump campaign was “in cahoots” with WikiLeaks. Pence replied, “Nothing could be further from the truth.”

More than two months after Hurricane Maria, less than half of Puerto Ricans have power. Ryan Zinke pals Whitefish Energy are pulling out, complaining that they’re not getting paid fast enough for their predatory-priced services. One in ten homes lack potable water. This wouldn’t be happening after a hurricane in, say, Long’s native Newton, North Carolina, where I bet they had electricity for Thanksgiving. Yet Long has branded San Juan Mayor Carmen Yulín Cruz’s determined advocacy for her citizens “political noise.”

Slavish Trump admirer and slumlord Barrack chaired the Presidential Inaugural Committee, whose financing celebrated the return of blatant corporate corruption of Washington. The committee raised an unprecedented $107 million and has repeatedly promised to donate excess funds to charity. Ten months later, there’s no evidence that a single nickel has been delivered to any charitable cause.

Zinke has dis-graced our list many times, due to his private jet-guzzling, climate change-denying, personal flag-hoisting, commemorative coin-issuing, staff loyalty-attacking ways. Now even President Trump seems to think Zinke is too keen on killing elephants. The Federal Election Commission is probing a political committee previously affiliated with Zinke for a range of troubling irregularities. And the Secretary’s wife, Lola Zinke, is becoming the Louise Linton of The Lower Cabinet, driving Interior staff nuts with her demands.

Net neutrality is good for consumers, small businesses, an open Internet, and freedom of expression. So naturally, Ajit Pai, Trump’s man at the FCC, is getting rid of it.

No honest person can say that the GOP tax bills primarily aid working and middle class Americans. Instead they are a huge gift to the richest of the rich Republican donors. These three men lead the effort to shove this abomination through Congress and get it to the president’s desk.

On “Fox & Friends,” Conway called Alabama Democratic candidate for Senate Doug Jones “weak on crime,” “weak on borders,” “strong on raising your taxes” and “terrible for property owners.” When the Friends asked if Alabamans should therefore vote for Roy Moore, Conway replied, “I’m telling you that we want the votes in the Senate to get this tax bill through.” Conway’s remark, which may have violated the law, warmed up America for POTUS’s subsequent endorsement.

Every week there are more indications that Kushner habitually conceals the truth.

Our president, accused by at least sixteen women of sexual abuse, told us this week that “women are very special,” and he showed us what he means: They’re very special unless they accuse him or another Republican, in which case they’re total liars.

The transcript of Trump’s remarks Tuesday on the White House South Lawn deserves our full attention:

Q Mr. President, are you ready to talk about Roy Moore at all?

Q Is Roy Moore, a child molester, better than a Democrat? He’s an accused —

THE PRESIDENT: Well, he denies it. Look, he denies it. I mean, if you look at what is really going on, and you look at all the things that have happened over the last 48 hours, he totally denies it. He says it didn’t happen. And, you know, you have to listen to him also. You’re talking about, he said 40 years ago this did not happen. So, you know —

Q Are you going to campaign for Roy Moore?

THE PRESIDENT: I’ll be letting you know next week. But I can tell you, you don’t need somebody who’s soft on crime, like Jones.

Q Mr. President, what is your message to women, sir, during this pivotal moment in our country where we’re talking about sexual misconduct? You’ve had your own allegations against you. What do you say to women?

THE PRESIDENT: Let me just tell you, Roy Moore denies it. That’s all I can say. He denies it. And, by the way, he totally denies it.

Q Mr. President, what is your message to women? This is a pivotal moment in our nation’s history.

THE PRESIDENT: Well, he denies. I mean, Roy Moore denies it. And, by the way, he gives a total denial. And I do have to say, 40 years is a long time. He’s run eight races, and this has never comes up. So 40 years is a long time. The women are Trump voters; most of them are Trump voters. All you can do is, you have to do what you have to do. He totally denies it.

Does Trump think Roy Moore denies it?  We’re not sure from the remarks. Did Trump include a reality-show cliffhanger regarding whether he’ll campaign for the bigoted accused child abuser? Yes he did.

Not content to focus this week’s hatefulness on endorsing a man against whom there is powerful cumulative evidence of child sexual abuse, Trump gladly took the bait from West Coast Donald Trump and Potential Next Stupid President Lonzo Ball, reviving the Trump racial refrain that successful black people are insufficiently “grateful” [to white people]. Further, Trump indicated that in the future he will base foreign policy decisions at least in part on how effusively people thank him, saying of the U.S. college basketball players detained for alleged shoplifting in China, “I should have left them in jail!”

Trump also continued to rile up his racist fans by attacking African-American athletes, condemning the Raiders’s Marshawn Lynch for his supposed “Great disrespect!” and commanding, “Next time NFL should suspend him for remainder of season.”

But bigotry is just a hobby. Trump’s actual business is corruption and kleptocracy. He continues to make money off a Panama City skyscraper that appears to be used by drug dealers to launder money. Just as Trump’s hotel in DC is earning big from sycophants, foreign and domestic, who hold events, rent rooms, and run up big bar tabs, he’s also getting piles of cash from conservative “charity” fundraisers at Mar-A-Lago where all or nearly all the money goes right into the presidential pocket. The organizer of an upcoming 700-person, $600 per ticket “Truth About Israel Gala” told the Washington Post he’s fine with Mar-a-Lago keeping most of the proceeds: “We’re supporting our president, who supports Israel.” The organizer of a “Trumpettes USA … Red, White, and Blue Celebration for We the People” event — 800 people, at $300 each — promises that any leftover money will go to a police charity, but she doesn’t expect any such leftover money, and that’s OK because “I don’t think any president has ever had such a rough nine months.”

Meanwhile it was revealed in a tax filing that in March another Trump golf club, in Westchester, paid back $158,000 to the Donald J. Trump Foundation — money that the foundation had improperly used to settle a lawsuit against the club. New York’s attorney general is reviewing evidence that Trump used his charity — mostly funded by other people’s money — as a personal piggy bank.

Before pardoning a pair of turkeys, a trial run for pardoning Jared Kushner and Mike Flynn, Trump proclaimed, “I feel so good about myself doing this.” After taking yet another gratuitous, this time scripted, unfunny dig at President Obama, Trump left for yet another golf weekend.

Fortunately for decent folk, special counsel Bob Mueller seems to be looking into whether Trump obstructed justice in connection with the James Comey firing. As someone once said, I’m very happy a lot of these things are coming out, and I’m very happy it’s being exposed. So Mr. Mueller, all you can do is, you have to do what you have to do.