posted at 7:19 pm by David Halperin 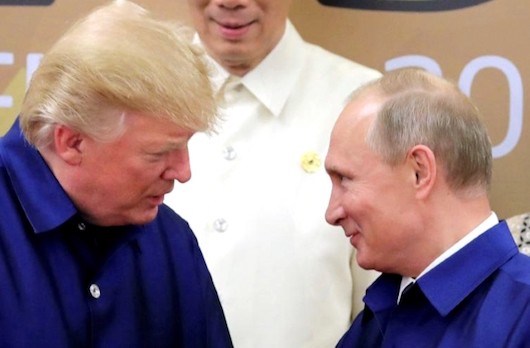 Between Bob Mueller’s expanding Russiagate probe, and the fine people who cast their ballots last Tuesday against the ugliness of this presidency, Trump world is finally taking a beating. But there’s a long, long way to go, and meanwhile angry young white male Trump supporters are increasingly being addressed as “your honor” (because Trump is appointing them to federal judgeships). So let’s get to it.

The Koch brothers’ top man inside the White House (other than Vice President Pence) suggested that accused child sex abuser and Alabama GOP Senate nominee Roy Moore deserves the benefit of the doubt because he “is somebody who graduated from West Point, he served our country in Vietnam, he’s been elected multiple times statewide in Alabama” — leaving out Moore’s disgraceful record of bigotry and hate and his repeated refusals to obey the law.

Russian lawyer Natalia Veselnitskaya says that in the notorious Trump Tower meeting Donald Trump Jr. told her, “if we come to power” the U.S. and Russia could revisit their relationship. Maybe that’s just Veselnitskaya’s authoritarian-lensed paraphrase, but I don’t know, it kinda sounds like Don Jr. I can’t wait for an indictment that will propel President Don Sr. to tweet, “Few people knew the young, low level volunteer named @DonaldJTrumpJr, who has already proven to be a liar.”

Junior also emulates dad with his own barrage of ugly tweets, including this week a retweeted side-by-side comparing his ex-model stepmom and Secretary of State Hillary Clinton in chinoiserie fashion; a reference to Bowe Bergdahl as a “POS”; and a series of rabid election day endorsements of swampy lobbyist/racial dog whistle campaigner/losing Virginia governor candidate Ed Gillespie.

As he lumbers around America trying to elect supposedly populist but actually just bone-headed, bigoted, morally-questionable characters like Roy Moore, it’s so painfully obvious that he’s dreaming of turning himself into a Trump-style TV celebrity, OK?

DeVos is taking the next step this week to dismantle protections for students and taxpayers against crooked for-profit colleges — the colleges whose owners and executives are her own political appointees at the Education Department, as well as donors and friends of the president.

Last week we also learned — when he was dumped after Senate objections — that Trump and DeVos had selected to be her Assistant Secretary for Career, Technical and Adult Education a Michigan state legislator named Tim Kelly, who has called for banning Muslims from airplanes, said that women aren’t interested in careers in science, and opined that low-income parents are “academically and socially needy.” Kelly blamed the withdrawal of his nomination on “deep state… haters” and federal workers who don’t like Trump. Seems like he would have been amazing in the job.

Pruitt couldn’t be bothered to go to Europe for the global meeting on the Paris climate agreement, which is now backed, after effing Syria joined up, by every nation on earth except ours. But he did manage to leave his heavily-guarded, soundproofed office to record a video fawning over attendees at a pathetic climate denier conference convened by the Heartland Institute.

It also remains exciting that coal lobbyist Andrew Wheeler is Trump’s nominee to join EPA as Pruitt’s deputy — just in case Pruitt ever considered doing anything to harm poor lil’ coal. Which wouldn’t happen though. In fact, Pruitt continues to fill his senior ranks with fossil fuel industry lobbyists and donors, while shutting agency experts out of decision-making.

How in hell is it “reform” to raise taxes for middle class people so the richest-of-the-rich dead people can pass more wealth on to their lazy heirs? And other questions about this disgraceful tax bill that is basically a GOP gift to big donors and a lie to the rest of us.

After meeting with Vladimir Putin, Trump revived Putin’s hilarious argument that it couldn’t have been the Russians who hacked our election because they are too masterful to have left a trace, demonstrating again that Trump is a Russian agent, a Russian blackmailee, a Russian sycophant, or a Russian dupe. Obviously Trump also remains extremely bothered that proof of Russian interference undermines the legitimacy of his electoral win, but I think mostly Putin is Trump’s role model, because Putin figured out how to become a billionaire kleptocrat / autocrat president, and he wants to make great deals with Putin so, he, Trump, can become a real billionaire, too. Trump forgot to tweet that he sides with Putin on the toilet paper over/under dispute, but I assume that’s coming.

Amid his exhausting, for him, trip across East Asia, there was also this piece of international diplomacy:

The 45th President of the United States, ladies and gentlemen.