posted at 6:42 am by David Halperin 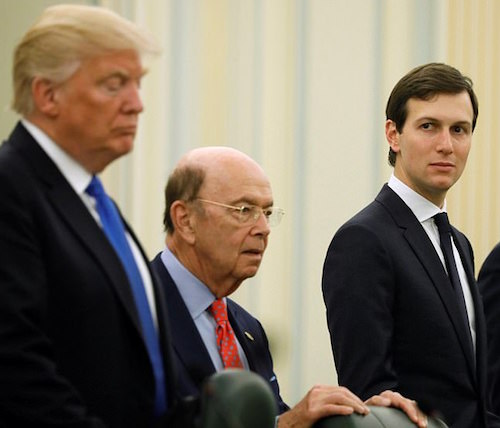 Why are fire engines red? Whatever. An incompetent, ignorant, unstable, Putin-backed con artist is somehow still president of our United States.

Since 2017, Republic Report‘s “Trump Terrible 10” has ranked the week’s 10 most disgraceful figures in the Trump universe.

Normally the amiable-seeming Perry is eclipsed in disgracefulness by his shiftier cabinet partners in climate change denial, Scott Pruitt and Ryan Zinke. But this week, Perry burned not-bright, telling an audience in South Africa, “from the standpoint of sexual assault, when the lights are on, where you have light that shines, the righteousness, if you will, on those types of acts. So from the standpoint of how you really affect people’s lives, fossil fuel is going to play a role in that.”

Democratic DC power lawyer Jamie Gorelick has been Jared and Ivanka’s ethics compliance counsel as they have amassed an utterly disgraceful record of ethics non-compliance. Yet last week she somehow was honored by something called Ethisphere, Inc. as one of the “Attorneys Who Matter” by “making the greatest impact on ethics and compliance using the skills of their profession.” As numerous wiseguys wrote to me after I blogged about the award, Gorelick indeed seems to be making an impact, just a terrible one.

With Bob Mueller’s investigation exposing still-more ties between Trump officials and powerful Russians, U.S. Commerce Secretary Wilbur Ross forgot to tell us that he has kept his investment in a gas shipping company he once controlled, one tied to a key Russia oligarch and to Vladimir Putin’s son-in-law.

An interview with Politico again showed DeVos as shamelessly unschooled in education policy. Asked about a Buzzfeed report that her department was ready to approve the conversion to non-profit status of two troubled for-profit college chains — Kaplan and EDMC — DeVos responded, “I didn’t see that story, and I imagine that it was accurate, but it’s kind of … not, I mean, it’s a minor point to me. Organizations reorganize on a pretty regular basis, so I know that Kaplan, for example, was just purchased by Purdue, and is being organized as a non-profit after having been for-profit. But that’s a tax status issue.”

It’s not a “tax status issue.” Recognizing the conversion from for-profit to non-profit status frees a college from legal requirements aimed at protecting students: the rule that for-profit schools receive at least 10 percent of their revenue from sources other than Department of Education federal student aid, as well as the rules and constraints of the gainful employment rule, which compares student earnings with student debt (although DeVos is in the process of dumping that rule). In fact, the Kaplan decision is one more in a long string of actions by DeVos to aid the greedy owners of predatory schools that scam and injure veterans, single mothers, and other students.

Is Gillespie a racialist ugly Trump Republican or a K Street lobbyist swamp Republican? I guess both.

Mueller’s indictment of Russia-friendly lobbyist Manafort and his long-time associate Rick Gates revealed decades of apparent criminal conduct, not to mention expensive buildings, suits, and rugs purchased with the proceeds.

In another interview with Fox News, General Kelly praised Robert E. Lee and the confederacy as principled folk, and opined that “the lack of an ability to compromise led to the Civil War.” Because compromising about the enslaved status of human beings would have been swell. Kelly has revealed himself to be just another angry old bigot, like his boss Trump. Kelly still hasn’t apologized to Gold Star widow Myeshia Johnson or to her family friend Rep. Frederica Wilson (D-FL) for his ugly and blatantly false attacks on them during the week that Sgt. La David Johnson was laid to rest. In fact, Kelly proudly affirmed on Fox that he will “never” apologize.

They tolerate Trump’s ugliness and crookedness because Trump allows their policies favoring the wealthiest Americans and corporations. Their tax “reform” bill has now been exposed to raise taxes on many middle class Americans.

As Mueller’s Russiagate investigation gets closer and closer to the Oval Office, Trump’s ongoing attacks on law enforcement, judges, and the justice system aren’t all that scary any more– ill-informed, passive-aggressive whining that mostly gets ignored — but they are disgraceful. Trump’s demands for criminal investigations of actions by Democrats that aren’t remotely crimes are just one more grotesquerie, as was his Twitter blaming of Chuck Schumer just after the awful terrorist attack in Manhattan.

Sunday saw another in an escalating series of horrifying mass shootings, yet Trump does nothing to impose limits on firearms; instead he declared after 26 were murdered and 20 injured by an armed Texas man, “This isn’t a guns situation.”  But Trump has put cash in our pockets, according to Trump. He told reporters flying with him to Japan, “The reason our stock market is so successful is because of me. I’ve always been great with money.”