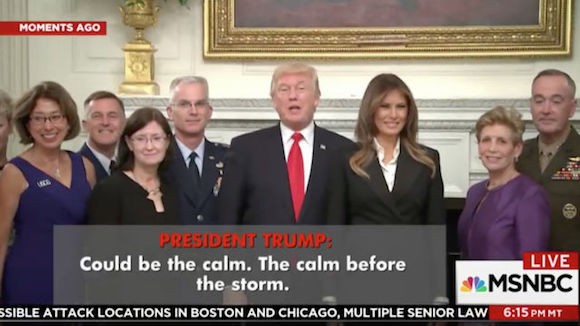 We had hoped Donald Trump’s disgracefulness wouldn’t include provoking a nuclear war. Lordy.

Yeah, this was another disgraceful week in Trumpland. In fact, it’s been just four days since the end of the last disgraceful week. The Trump team’s disgracefulness is coming so fast that we now base our weeks on cat years.

In an Oval Office meeting with Lilian Tintori, the wife of Venezuela’s best-known political prisoner, Melania Trump said, according to the Washington Post, that “she sympathized with the conditions Tintori’s husband, Leopoldo ­López, faced in jail back in Caracas because the White House often felt as confining as a prison,… a point on which the president agreed.” No doubt being married to Donald Trump does feel like prison, which is why we’re holding Melania in the 10 spot, but it was a grotesquely insensitive remark to the wife of a man actually locked up.

Romney endlessly attacked the Democrats over the deplorable Harvey Weinstein, ignoring that her job revolves around glorifying a president whose powerful-guy-assaults-women MO has been pretty much the same as Weinstein’s.

Ivanka and Jared are holding dinners with bipartisan groups of lawmakers to search for sensible solutions to our problems. That’s good except (1) they have no idea what they’re doing; and (2) the couple held one session on criminal justice reform, after Jared, according to Axios, “recently convened a criminal justice roundtable at the White House where attendees said he spoke about his personal interest in the issue. Kushner said he got a first-hand taste of the challenges of the criminal justice system when his father, Charles Kushner, was sentenced to two years in prison after pleading guilty to tax evasion.” Yeah, Jared’s super-interested in more leniency for criminals, thinking, perhaps, not just of his dad’s past problems but of other family members’ future ones.

Entitled, sheltered Betsy DeVos has been week-by-week tearing down protections for the victims of predatory for-profit colleges — broke veterans, single moms, people of color, immigrants, who were seeking better lives through education, only to be deceived, abused, and left worse off by greedy, crooked colleges owned by strip mall sharpies and Wall Street barons alike. DeVos, who has personal investments in for-profit education, has viciously insulted students in the process.

DeVos could soon be joined in DC by another member of her billionaire family: Her brother Erik Prince, encouraged by disgraceful ex-White House strategist Steven Bannon, is reportedly considering a GOP primary challenge to Wyoming Senator John Barrasso. Prince is qualified to be part of the Bannon Party because he ran the private security company Blackwater, whose employees were convicted in a U.S. federal court of killing people in Iraq.

Zinke got called out in a scathing letter by Joel Clement, the Interior Department’s top climate policy expert, who resigned Wednesday after he, and dozens of other senior career agency employees, were reassigned in June. Clement, who was placed in an accounting job for which he had no experience, has filed a whistleblower complaint, alleging that he was punished for seeking protections for native Americans in Alaska.

Zinke also drew a strongly disapproving statement from a bipartisan group of former Interior political appointees, after his comment that 30 percent of Interior staff aren’t loyal to him. These ex-officials said, “To criticize these employees impugns their integrity and undermines both morale and the important work of the Department.” Let me translate that: Zinke is a disgrace.

Pruitt is the humble, though entitled, vessel through which the Koch brothers and the entire fossil fuel industry are now running our country and accelerating deadly climate change. With destructive storms showing us what climate change looks like, Pruitt went to coal country to announce that “the war on coal is over” because his EPA is dumping the Obama Clean Power Plan. But doing so won’t bring back coal jobs, and it will make global warming more severe. Pruitt is literally destroying the planet to please the fossil fuel companies that have been bankrolling his political career.

Sessions must be tickled that Trump is, for now, directing his passive-aggressive cabinet tweet hate at Rex Tillerson, instead of him. In any case, nothing is stopping  Little Bigot Man (we can give nicknames, too) from tearing apart civil rights protections. This week he announced that the Justice Department would reverse its previous position and now argue that transgender people can be fired from their jobs just because they’re transgender. He also directed Justice Department lawyers to argue in court that employers and businesses can discriminate against people — say, LGBT people, or pregnant people, or people not of their religion — by claiming religious objections.

Following his expensive, taxpayer-funded football stunt on Sunday, Pence tweeted, “I left today’s Colts game because @POTUS and I will not dignify any event that disrespects our soldiers, our Flag, or our National Anthem.” But how does Pence’s presence “dignify” anything, when every day he enables a corrupt, untruthful, bigoted, misogynist, sexual abuser president?

Never take your eye off where this all started: police killings of unarmed black men across the country — Philando Castile, Terence Crutcher, and many more. That’s what Colin Kaepernick and other NFL players have been protesting, silently and with dignity. Yet Trump and Pence never say anything about the shooting victims. All they do is use the controversy to fire up what’s left of their base.

Pence is a disgrace. I’m not even sure I’ll keep praying every night for him to become president.

Speaking at supporters during a Hispanic Heritage Month event, Trump twice slowly pronounced “Puerto Rico” in a manner that suggested he was, I don’t know, mocking Puerto Ricans for pronouncing the name of the commonwealth in the way a Spanish speaker would, instead of the way regular Americans from Queens would. Meanwhile, Trump’s reluctant waiver of the Jones Act — which could help speed aid to the island — ended almost as soon as it started. Donald Trump doesn’t care about Puerto Ricans.

Trump does seem to care, a lot, about one North Korean, a Mr. Kim Jong Un. For Kim, Trump has mixed up a brew of reality show theatrics and blustering threats of war. Standing at the White House with military commanders, Trump delivered a “calm before the storm” tease that was as surreal and disgraceful a moment as the White House has ever seen. His tweet that “Sorry, but only one thing will work” against the North Korean nuclear threat was reckless and reprehensible, especially given that he has no idea how to protect Americans and our allies if war comes.

Bob Corker knows all this, which is part of why he bluntly called out Trump for being a menace and an idiot. (In a predictably disgraceful move, White House aide Kellyanne Conway (this week’s ranking: 11) said Corker’s “demeaning tweet at the president” was “incredibly irresponsible” and “adds to the insulting” by “the mainstream media and the president’s detractors.”)

The Corker episode should remind all of us: If Trump ever calls you up, sure, take the call, but get ready for him to tweet afterwards that, whatever he asks you for, he’ll say that you begged him for — begged him like a dog.

In other disgracefulnews, Trump dumped federal protection for birth control coverage in health insurance. He essentially broke a deal he made with Democrats on the young immigrant Dreamers, demanding the Wall and every other draconian measure. On Twitter, he asked why the Senate Intelligence Committee, instead of pursuing the clear evidence that authoritarian Russia interfered in our election, isn’t “looking into the Fake News Networks in OUR country to see why so much of our news is just made up-FAKE!”

And while Pressure Cooker Trump was condemning news outlets, football players, and the Republican chairman of the Senate Foreign Relations Committee, he said nothing about the latest white supremacist march in Charlottesville, the place where a racist idiot killed counter-protestor Heather Heyer in August.

White SuPresident Trump is again number one — the most disgraceful figure in the Trump administration. Trump is not merely a disgrace; he’s a total and complete disgrace.