posted at 1:49 pm by David Halperin 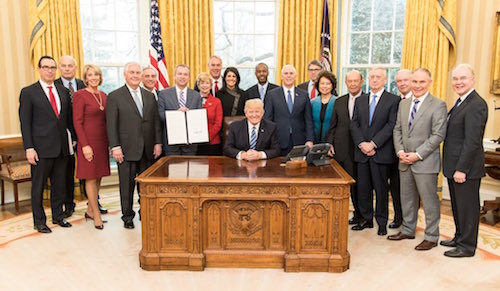 Republic Report, which focuses on how money corrupts democracy, has met its perfect mate with the administration of President Donald J. Trump. Trump and his lieutenants personify how money and greed, mixed with angry bigotry, disrespect for constitutional freedoms, and know-nothing ignorance, can really, really corrupt democracy.

Eyeing the awful kleptocratic corruptness of the Trump administration really, really hurts one’s eyes, so we at Republic Report prefer to try to laugh, or at least to audition pop culture or sports motifs as a way to avoid our own destructive behavior, or days spent hibernating under the covers.

Hence, the first edition of Trump Team Disgracefulness Power Rankings, counting down the ten most disgraceful figures in the Trump administration, with some weight given to the entirety of a person’s shameful record, but more credit given to the grotesqueries of the past week.

Spoiler alert: Absent an actual homicide committed by a supporting player, we can’t imagine that anyone other than Donald J. Trump will ever occupy the top spot. But, then, he is the best. And we won’t get tired of him winning. Believe me.

10. Sarah Huckabee Sanders, Principal Deputy White House Press Secretary. In the tradition of slavish paid Trump sycophants Hope Hicks and Dr. Harold N. Bornstein, Sanders told reporters this week,  “I can definitively say the president is not a liar.” Sanders can definitively say that, but it’s not remotely true. Sanders avoids the top nine because she really needs this job.

9. Tom Barrack, presidential friend. An affable-seeming Harry Shearer look-alike, Barrack told the 2016 GOP convention what a wonderful guy Don Trump is, and then served as chairman of the Presidential Inaugural Committee, whose financing celebrated the return of blatant corporate corruption of Washington. Turns out Trump and Barrack have more in common than just deep love of Trump.  Barrack, according to an expose this week in Reveal, capitalized on the Great Recession (as did Trump Treasury Secretary and foreclosure king Steven Mnuchin) to become “a modern-day slumlord – buying up homes, bumping up rents and allowing the properties to fall into disrepair.” Tenants in Los Angeles and Atlanta reported that Barrack’s company imposed endless fees while leaving units in disrepair with property damage, leaks, mold, bugs, even snakes. Barrack had claimed this scheme was “the greatest thing I’ve ever done,” but the day after the report was published Barrack resigned from the board of the company in charge and sold all his stock in the business.

8. Ivanka Trump, Assistant to the President. We’re still glowing over how President Trump’s absolute favorite person in the world used her influence to dissuade her dad from destroying the planet and pulling out of the Paris climate agreement. Or we hoped she could make that happen. But she didn’t. Perhaps with so much work-life balance stress, you have to let things go, like our coasts, food supply, and human existence.

7. Tom Price, Secretary of Health and Human Services. Price, a highly confident surgeon who as a congressman excelled mostly at shady trading in medical stocks that benefitted from his House votes, went to Capitol Hill this week and offered a shifty defense of Trump’s proposed deep cuts in Medicaid spending, claiming “there are no cuts to the Medicaid program” in the House Obamacare repeal bill. The Congressional Budget Office found that the bill would reduce Medicaid funding by some $800 billion over 10 years, but Price said there was no cut because federal spending would increase, just not by as much as it would if there was no bill.  Senator Bob Casey (D-PA) responded to Price, “You have been deliberately misleading.”

6. Betsy DeVos, Secretary of Education. DeVos was asked repeatedly at a hearing by Democratic senators if she would prohibit private schools that take federal vouchers from discriminating against LGBTQ and disabled children, in the face of evidence that such discrimination is happening. Instead of addressing this important question, and standing up against bigotry, DeVos replied a breathtaking 14 times (I was in the room and stopped breathing) with a meaningless memorized mantra: “Schools that receive federal funds must follow federal law.”

By week’s end DeVos was on the verge of trashing two Obama administration rules, gainful employment and borrower defense, each aimed at protecting students and taxpayers against predatory, abusive behavior by for-profit colleges — the Trump University clones that funnel billions in federal dollars to cynical, wealthy barons. DeVos herself held investments in such companies, and her Department of Education has staffed up with for-profit college executives, Meanwhile DeVos was slapped by a California federal judge, who ruled that her Department’s effort to delay addressing a defrauded student’s claim for loan relief was “both frivolous and in bad faith.” (The judge also noted that Justice Department lawyers representing DeVos had misspelled her name as “Davos” several times in their court papers.)

5. Stephen Bannon, White House Chief Strategist. We have no idea what Bannon did this week, beyond making marks on his (no other color will do) white board. Whatever he did, he’s a disgraceful bigot.

4. Scott Pruitt,  Environmental Protection Agency Administrator.  Still celebrating his and Bannon’s total victory over planet Earth through Trump’s abandonment of the Paris accord, Pruitt went on NBC’s “Morning Joe” to offer the deceptive claim that electricity in American homes is at risk if we turn our back on Pruitt’s best friend, coal. Pruitt claimed that if coal use falls under 30 percent of all power sources,  the U.S. would be vulnerable to terrorist attack. Energy experts say that just isn’t true.

What is true is that Pruitt rose to prominence as Oklahoma attorney general by championing the interests of, and taking money from, fossil fuel companies, including coal interests. A new investigative report from Maplight this week revealed that, as Oklahoma AG, Pruitt chaired the Rule of Law Defense Fund, a group that raised more than $750,000 and was “at the center of a web of dark money nonprofits that have worked to advance conservative interests, and has helped organize state challenges to environmental regulations that could hurt polluters financially.” During his confirmation hearings, Pruitt refused to disclose the donors to this group, but it turns out that they include the Koch brothers and Edison Electric Institute, a trade group for big utility companies.

Pruitt is now hard at work dismantling the rules aimed at protecting Americans against toxic pollution, chemical explosions, and global warming. With all the industry gratefulness that will attract, Pruitt’s next stop may be the Senate, or even the White House.

Come on. Always standing up there beaming with pride over President Trump signing a meaningless executive order — bowing to a crude abuser of women in exchange for getting help for Indiana bakers who don’t want to decorate gay wedding cakes. Disgraceful.

Hiding in his office because President Trump is mad at him for mishandling the Russiagate coverup, and amid signs that there was yet another undisclosed meeting with ubiquitous Russian ambassador Sergey Kislyak, Sessions is quietly undermining important functions of the Justice Department. His agency’s proposed budget would make a huge cut in staff as the Civil Rights division, which is responsible for protecting voting rights and fighting discrimination. Sessions already cancelled Obama administration guidance regarding discrimination against transgender students. And he says he will end the Department’s vigilant oversight of local police departments; he even went to court to overturn a monitoring agreement negotiated between the Obama Justice Department and the Baltimore police, a move that a federal judge swiftly rejected.

Sessions also has ordered federal prosecutors to rev up the failed “war on drugs” policy of the past, seeking to pile on charges and mandatory minimum sentences against offenders, and he may be gearing up to operationalize his deep fear of marijuana to impose new restrictions, even on medical use.  Sessions also cancelled an Obama policy of phasing out use of private prisons, a policy implemented after the Department’s inspector general found such institutions were marked by overcrowding, weak security, and violent incidents. Sessions cited the need for more prison cells for all the people he plans to lock up, but it’s also true that the private prison industry donated generously to support Trump’s election.

1. Donald J. Trump, President of the United States, a.k.a. the man whose run for the White House stemmed entirely from having to sit through President Obama mocking him at the White House Correspondents Dinner.

This week, Trump shamelessly tried to keep his supporters tuned into his fact-free channel, tweeting that James Comey’s damning testimony was a “total and complete vindication.” Switching to another channel that assumed that Comey’s testimony, on its face, was not a vindication, Trump claimed in a press conference that Comey’s story was false, and that he was “100 percent” ready to testify under oath, which no doubt he will do in two or three weeks, perhaps around the same time that he reveals whether there is an Oval Office taping system and whether “Bad (or sick) guy!” Obama had Trump Tower tapped.

Flashbacks: (1) Comey’s testimony about his conversations with Trump reaffirmed that our president is so consumed with validating his 2016 victory that he doesn’t care a whit about Russian interference in our election — oh, and also that Trump obstructed justice in trying to stop the Flynn probe by pressuring Comey and then firing Comey; (2) a Forbes report charged that Trump ordered the diversion to the Trump Organization, over several years, of hundreds of thousands of dollars raised by the Eric Trump Foundation that were supposed to go to kids with cancer.

The only positive thing Trump did all week was that he undercut his lawyers’ effort to get the Supreme Court to uphold his bigoted travel ban by obnoxiously calling it a TRAVEL BAN over and over in tweets.

But unintentionally lessening his destructiveness doesn’t change our judgment: Trump is this week’s number one in the Trump Team Disgracefulness Power Rankings. Trump is not merely a disgrace; he’s a total and complete disgrace.