posted at 3:41 pm by David Halperin 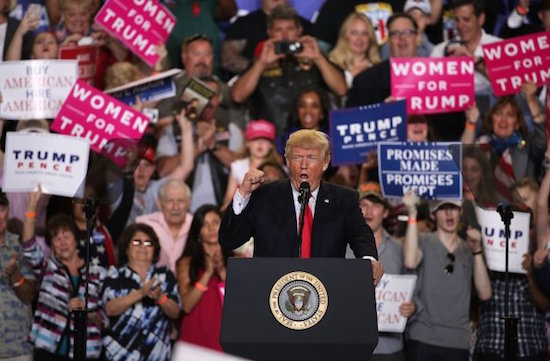 Republic Report, which focuses on how money corrupts democracy, has met its dream mate with the kleptocratic administration of President Donald J. Trump. Trump and his lieutenants personify how money and greed, mixed with serious bigotry, disrespect for constitutional freedoms, and know-nothing ignorance, can really, really corrupt democracy.

Hence, Trump Team Disgracefulness Power Rankings, counting down the week’s ten most disgraceful figures in the Trump administration. Crack open an entire bottle of bourbon and wind down with us.

This week another Trump lawyer marks his territory, the Interior Secretary stashes career staff in the interior of his building, and Mitch McConnell’s Senate Republicans take their own whack at sick people.

Permanent spoiler alert: We simply can’t imagine anyone other than Donald J. Trump ever occupying the top spot. But we won’t get tired of him winning. Believe me.

For devising, or more likely acquiescing in, daily press briefings with cameras banned, thus restricting access to us visual learners.

The Washington Post reported that Zinke is reassigning dozens of the Interior Department’s most senior career officials, seemingly placing them in new positions at random, at a speed and scale that experts described as unprecedented and troubling. One example: “Interior’s top climate policy official, Joel Clement, who directs the Office of Policy Analysis… was informed that he would go to the Office of Natural Resources Revenue, which collects royalty payments.” Someone needs to investigate this particular example further, because it sounds like the time diligent Lieutenant Daniels from The Wire got reassigned to be a clerk in the evidence room.

He’s part of a growing Trump family legal squad that includes boundary-free New York mouthpiece Marc Kasowitz (last week’s ranking: 8), mercenary DC lobbyist Jamie Gorelick (last week’s ranking: 9), and actually appropriate criminal lawyer John Dowd. But highly-compensated religious attorney Jay Sekulow brought his own brand of disgracefulness this week, appearing on three Sunday shows and attempting to push back on his client’s tweet reading “I am being investigated for firing the FBI Director….” Sekulow insisted over and over that Trump in fact is not being investigated, even though Trump said he is. Then Sekulow slipped and complained to both CNN’s Jake Tapper and to Fox’s Chris Wallace that Trump is being investigated. Confronted by Wallace that he’d made that admission, Sekulow denied it, before eventually admitting that he didn’t actually know if Trump is under investigation. Attempting to be smooth, while playing fast and loose with the facts, even the facts about what he himself had just said live on TV, Sekulow was a total and complete disaster, as well as a disgrace.

Sessions sensibly got his own private Russiagate lawyer this week — perennial Federalist Society stalwart Chuck Cooper — rather than being inspired by Marc Kasowitz’s reported suggestion to White House staff that they needn’t bother. That’s fine. But opposition is growing, including among judges and prosecutors, to Sessions’ absurdly wrongheaded approach to crime and justice issues, which includes heavy prison sentences for non-violent offenders, a strategy that appeals mostly to Trump donors who own for-profit prisons.

For his rapturous gazes at Trump, like he’s looking at the Lord Himself. Also for the same reasons as Mitch McConnell, see 2 below.

Again this week, we have almost no idea what Bannon did, beyond making marks on his  white (supremacy) board. Whatever he did, he’s a disgraceful bigot.  Extra disgraceful points this week for texting a reporter that the White House was moving Sean Spicer’s press briefings off-camera because “Sean got fatter.”

The Washington Post this week published an email revealing that Pruitt’s EPA has told dozens of respected scientists who have been advising the agency that their services are no longer needed, accelerating actions to purge serious scientists from EPA’s ranks. Although renewal for a second term had been standard practice in the past, Pruitt’s EPA told members of the Board of Scientific Counselors whose terms are expiring that they won’t be renewed, although they can reapply. Upcoming board meetings will be cancelled — because there won’t be enough members.  EPA officials, according to the Post, say the action provides “an opportunity to reach out to a broad array of applicants and draw on their expertise.” A lobbyist for the chemical industry made clear what they meant, calling the previous board “biased,” meaning biased against chemical manufacturers. Elena Craft, an Environmental Defense Fund researcher and one of the dumped board members, said, “It’s just, yet another example of the administration’s disregard for independent scientific counsel, on issues that are critically important to the nation.” Meanwhile, a scientist who managed the EPA’s climate change website wrote this week that the agency’s decision to shut down that site “signifies a declaration of war on climate science by EPA Administrator Scott Pruitt.”

EPA records show that Administrator Pruitt, just as he did as Oklahoma’s attorney general, is spending a lot of time meeting with fossil fuel industry executives and lobbyists, the kind of folks who have funded his political activities in the past. But such information has been slow in coming. Pruitt’s EPA has been stingy with Freedom of Information  Act disclosures, just as Pruitt was stingy with the truth regarding his emails.

Having last week announced her plan to trash the Obama gainful employment and borrower defense rules, measures created to provide students and taxpayers with basic protections from predatory for-profit colleges — an industry to which Trump, DeVos, and Devos staff have been financially tied — DeVos this week escalated her attack on her own department’s own accountability rules for schools. She announced that her Regulatory Reform Task Force would be making recommendations “on which regulations to repeal, modify or keep” and she asked the public to comment. She also released a memo from her task force, which is co-chaired by lawyer Robert S. Eitel, who works for DeVos at the Department but previously worked for predatory for-profit college company Bridgepoint Education. The memo includes a boring, but telling, passage about how Department staff will gather views on regulatory changes from “the higher education community”: they will meet with “higher education associations,” “financial aid administrators,” state officials, “representatives of independent and religious
schools.” Not named on this wish list of people to meet with in the higher education community: they’re called students and teachers.

Not technically on the Trump team and often looking frightened about Trump will do next, McConnell is a symbol of how the traditional corporate-controlled Republican Party is prepared to endure a four to eight year deal with the Devil (see #1, below): Trump gives the congressional GOP what its donors want — tax cuts for the rich and deregulation of corporations — and the congressional GOP abandons all integrity in allowing Trump to act disgracefully. This week McConnell unveiled the Senate version of Obamacare repeal, crafted in secret and in large measure a tax cut for the rich, as well as an abandonment of millions of Americans who need health care.

Trump was once again his own MDP (Most Disgraceful Player) this week, and let’s start with Trump’s disgraceful remarks at a Cedar Rapids, Iowa, campaign rally. After pledging at the same kind of rallies list year to take on Wall Street and Goldman Sachs, Trump bragged to the Iowans that he had hired as Secretary of Commerce Wilbur Ross, “the legendary Wall Street genius,” and as National Economic Council director Gary Cohn, “the president of Goldman Sachs.” Then Trump showed the crowd even more love: “I love all people — rich or poor — but in those particular positions, I just don’t want a poor person. Does that make sense?” It sure does make sense — if your government is focused on making yourself and other billionaires richer, as Trump’s surely is, if it’s focused on anything. It doesn’t make sense to rule out “a poor person” if you have some interest in creating well-paid, steady jobs for working people, as Trump claimed during the election, in which case you might want the leadership of a poor person like a Nobel Laureate economist, a governor, or heaven forbid a labor or consumer advocate.

Even more disgraceful than that starkly elitist declaration was Trump’s conclusion of his Comey tapes cliffhanger. Trump booster and public relations disaster Newt Gingrich (last week’s ranking: 7) offered a solid description of what most sane folks think Trump was doing when he tweeted on May 12 that James Comey “better hope there are no ‘tapes’ of our conversations before he starts leaking to the press!” According to Newt, “I think he was in his way instinctively trying to rattle Comey…. His instinct is: ‘I’ll outbluff you.'” That’s right, and also he hoped to convince his supporters, in advance of Comey’s Senate testimony, that Comey was lying. But Comey wasn’t rattled, and Comey couldn’t be bluffed, because Comey wasn’t lying, and he knew — Lordy! — that any tape would support him.

So Comey told the Senate the truth, and congressional lawyers had to spend a weekend drafting a letter demanding tapes that didn’t exist, with a June 22 deadline. Meanwhile Trump had teased the reality show reveal at a June 9 press conference, standing alongside Romania’s president: “I’ll tell you something about that maybe sometime in the very near future… I’ll tell you about it over a short period of time. I’m not hinting at anything… You’re going to be very disappointed when you hear the answer.” He also denied Comey’s account of their dealings and said he was “100%” willing to testify under oath, something he no doubt will agree to “in the very near future.”

When June 22 arrived, Trump handed his phone to a lawyer to type the reveal into Twitter using lawyerish language: “With all of the recently reported electronic surveillance, intercepts, unmasking and illegal leaking of information, I have no idea whether there are ‘tapes’ or recordings of my conversations with James Comey, but I did not make, and do not have, any such recordings.” Despite the more precise prose, it was vintage Trump, and vintage disgracefulness, similar to his September 2016 announcement to the world, as if we didn’t know, that President Obama was born in the United States — no apology, no reflection, no acknowledgment that he had made up the story he was now formally debunking.

Trump is again this week’s number one in Republic Report‘s Trump Team Disgracefulness Power Rankings. Trump is not merely a disgrace; he’s a total and complete disgrace.