posted at 2:53 pm by David Halperin 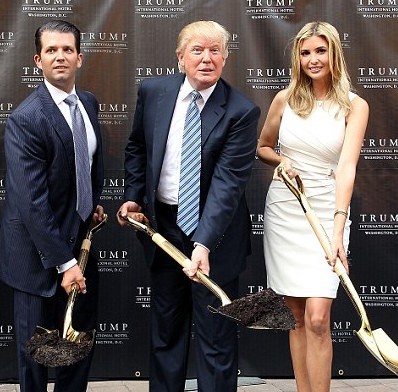 In the email to Trump Jr., Goldstone says that his client, Emin Agalarov, a Russian pop singer and the son of Aras Agalarov, a real estate mogul close to Putin, “just called and asked me to contact you with something very interesting. The Crown prosecutor of Russia met with his father Aras this morning and in their meeting offered to provide the Trump campaign with some official documents and information that would incriminate Hillary and her dealings with Russia and would be very useful to your father. This is obviously very high level and sensitive information but is part of Russia and its government’s support for Mr. Trump.”

Don Jr. replied, “If it’s what you say I love it….” The meeting between the Russian lawyer and Don Jr., Trump son-in-law Jared Kushner, and Trump campaign chairman Paul Manafort occurred less than a week afterward.

If an FBI sting email offered a meeting for a terrorist plot or underage sex with similar specificity, agents would force to the ground and cuff, and a jury would likely convict, whoever showed up. Those “To Catch a Predator” slimeballs went to prison even though the teenage girls they were texting were in fact law enforcement agents. A bunch of knuckleheads have gone to prison for planning terrorist attacks that never were going to happen, because their recruiters were actually undercover FBI agents.

So even if it turns out that the Russian lawyer who showed up at the meeting, Natalia Veselnitskaya, was not actually a member of the Russian government, and even if she had no real dirt on Clinton, or was part of a Russian intelligence play, or actually wanted to discuss adoption of Russian children, whatever — it remains the case that Don Jr., by showing up for the June 9 meeting based on Goldstone’s pitch, acted with corrupt intent: intent to take for the Trump campaign something of value from Russia, which would violate campaign finance law, and intent to collude with Russia to affect the outcome of the election.

The Trump campaign and administration have repeatedly and emphatically denied they had contact with Russians. Don Jr. told CNN last June 24, just weeks after his email exchange with Goldstone, that allegations the Russian government was helping Trump were “disgusting … so phony.”

The fact that Don Jr. did not disclose this email exchange earlier, and the fact that Kushner did not until recently update his security clearance forms to disclose the meeting, heighten concerns that Trump’s son and son-in-law felt they had something to hide. That Trump on Saturday misleadingly told the Times that the meeting was “primarily” about adoptions increases such concerns even more. In fact, even the phony adoptions explanation, if true, wouldn’t be so innocent: It’s not that the Russians wanted to resume adoption of Russian children by U.S. families. What the Russian government wants is for the 2012 Magnitsky Act sanctions against Russian officials to be lifted. Veselnitskaya had lobbied against the sanctions, and Putin imposed the ban on adoptions as retaliation for those sanctions.

That Trump Jr. admitted on Sunday that he abruptly ended the meeting when it appeared that Veselnitskaya did not have real dirt on Hillary underscores that he was there for the purpose of getting that information.

Donald Trump Sr. today released a statement: “My son is a high-quality person, and I applaud his transparency.” High-quality praise from the man who fired James Comey and explained to NBC that “when I decided to just do it, I said to myself — I said, you know, this Russia thing with Trump and Russia is a made-up story.” High-quality praise from the man whose White House is actively working this week to water down legislation that would tighten sanctions on Russia.

Our country was stolen from us by crooks, as we always figured, but it still may be a long time before there’s a real reckoning. Meanwhile, is there not one high-level Trump official with the integrity to resign and question the disgraceful conduct of Donald J. Trump and his family?

David Halperin, a lawyer, previously served on the staffs of the National Security Council and the Senate Intelligence Committee. This article also appears on HuffPost.