Trump is a Crook; House Should Start Impeachment Probe 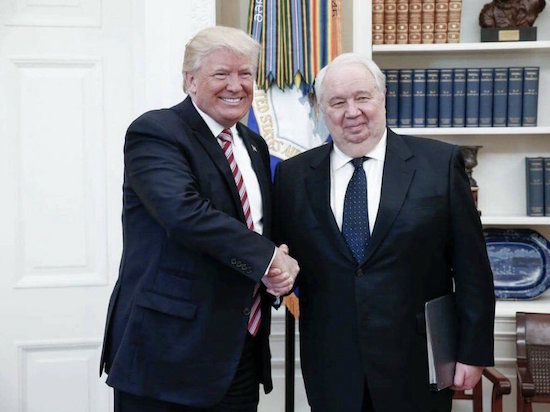 Donald Trump is a crook. He had freshly-confirmed Deputy Attorney General Rod Rosenstein write a little essay about Hillary Clinton emails and called that the reason for firing FBI director James Comey, but then tons of Trump associates immediately blabbed to the press with the real, obvious reason. Trump was “screaming” at the TV about the Russia investigation.

UPDATE 05/12/17: In an interview with NBC’s Lester Holt on May 11, Trump admitted that in deciding to fire Comey, he was thinking about the FBI investigation into Trump-Russia ties. Trump said, “regardless of [Rosenstein’s] recommendation, I was going to fire Comey. Knowing there was no good time to do it. And in fact when I decided to just do it I said to myself, I said, ‘You know, this Russia thing with Trump and Russia is a made-up story, it’s an excuse by the Democrats for having lost an election that they should’ve won.'”

UPDATE 05/16/17:  The New York Times reported today that in a February Oval Office meeting, Trump asked Comey to shut down the federal probe of Trump’s former national security advisor, Michael Flynn, who is under investigation for, among other things, his ties to Russia. The Times reported that Comey prepared a memo shortly after the meeting to recount what occurred, and the memo has Trump saying to Comey, “I hope you can see your way clear to letting this go, to letting Flynn go…. He is a good guy. I hope you can let this go.”

This is so disgraceful it is beyond words.

There may, or may not, be proof of Trump-Russia collusion — a smoking gun moment where Trump made a deal with Putin or was confronted with a Russian blackmail threat. My guess is we’ll never find that, even if the outlines of the corrupt arrangement are clear on the surface. Candidate Trump said he liked Putin and wanted to lift sanctions against Russia; Putin saw a Trump presidency as in Russia’s interest, so he engaged in a series of online dirty tricks that complemented the Trump operation’s work. Meanwhile Trump and a range of Trump associates have business dealings with Russia, some of which shade into engaging with Russian intelligence.

Whether a real sustained investigation of Trump-Russia ties would prove crimes of collusion by Trump, I don’t know. But anyone being honest knows this: Trump has sought to impede the investigation, to obstruct justice, by firing Comey.  He behaved like a tyrant, yes, but also your basic street-level crook, trying to silence a snitch.

The decision to fire Comey because he was pushing too hard on an investigation of Trump-Russia parallels the articles of impeachment against Richard Nixon. It is a sufficient ground to begin an impeachment investigation against Trump, if only the GOP House had a shred of integrity.