Today in Trump: The Lowlights 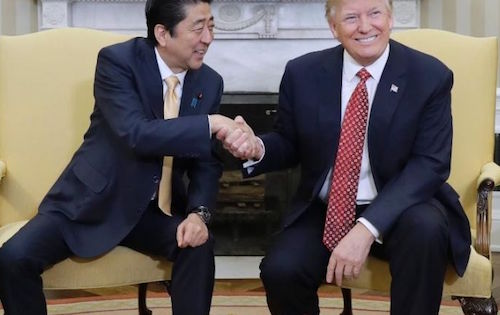 As midnight approaches, and the President presumably is safely in his bathrobe, here are some of the highlights just from today:

2. A White House official told reporters that Trump wouldn’t appeal the 9th Circuit Muslim ban ruling, only to be contradicted soon after.

3. After intelligence officials told CNN they have corroborated some details in the Russia dossier, White House spokesman Sean Spicer said, “We continue to be disgusted by CNN’s fake news reporting.”

4. CNN reported that Trump ignored the recommendations of Rex Tillerson and Reince Priebus and rejected Elliott Abrams to be Deputy Secretary of State because Abrams criticized Trump during the campaign.

5. Appearing with Japanese Prime Minister Abe, Trump, reading from a prompter, said the US and Japan would advance “freedom from navigation” before correcting himself.

6. Politico reported that it called Omarosa for comment on the Administration’s HBCU initiative. Omarosa “told Politico to email her, then hung up. She did not respond to emails.”

7. Trump, talking with reporters Friday afternoon aboard Air Force One, said he was unaware of the reports in several media outlets that in December Michael Flynn had discussed sanctions with the Russians but said he would “look into that.”