posted at 1:37 pm by Matthew Kasper

In the month since Tom Fanning, the CEO of Southern Company and current chairman of the Edison Electric Institute, said that carbon dioxide was not a primary contributor to global warming, no other utility leaders have disputed or criticized his remarks, despite the industry’s self-proclaimed commitment to climate action.

“Do you think it’s been proven that CO2 is the primary climate control knob?” Fanning was asked during a March 28 interview on CNBC.

“No, certainly not,” Fanning said.

Fanning followed up his statement by saying “Is climate change happening? Certainly, it’s been happening for millennia, that’s not the issue, okay.”

Fanning is wrong. Carbon dioxide is the primary greenhouse gas that is contributing to global warming. Additionally, the flawed logic Fanning expressed is frequently used by deniers. He implies that because the climate has always changed, humans and greenhouse gas emissions, specifically carbon dioxide, are not causing the current changes. The National Academy of Sciences reports “most of the warming over the last several decades can be attributed to human activities,” and that the “burning of fossil fuels for energy is the single largest human driver of climate change.”

In response to the power sector’s silence in the wake of Fanning’s remarks, the Energy and Policy Institute sent letters to over 50 utility holding companies and subsidiaries, and EEI, asking whether or not they stand by their association chairman’s public remarks.

Two utilities responded: Public Service Enterprise Group (PSEG) and American Electric Power (AEP). The spokesperson for the New Jersey-based PSEG said, “While we can’t comment on EEI or Mr. Fanning, PSEG has long been on the record stating that we believe in climate change.”

AEP also did not comment on EEI or Fanning, but said, “AEP has supported and taken action to address climate change and reduce our greenhouse gas emissions for nearly two decades, as a founding member of the Chicago Climate Exchange. AEP has also included a price for CO2 emissions in our long-term strategic planning for many years. AEP’s 2016 CO2 emissions are approximately 44 percent below 2000 levels (167.1 million metric tons in 2000 and 93.5 million metric tons in 2016), and we will see additional declines in our emissions as we transition to more natural gas and renewable resources in the future.”

If EEI and utilities really accept the science of climate change and the role carbon dioxide plays, more ought to respond to Fanning’s misleading remarks directly to set the record straight.

“To make matters worse, Fanning serves as chairman of the Edison Electric Institute, the influential trade association of investor-owned utilities. As such, his statement of climate skepticism reflects upon the entire utility sector. Of course, it could be disavowed by EEI officially, but it hasn’t. Its effect might have been mitigated by a spontaneous outpouring of condemnations and clarifications from CEOs of other major utilities, such as AEP and Exelon, but it hasn’t. We’ve heard crickets.

As far as I can tell, the utility sector is utterly content, possibly even pleased, to have a purported nonbeliever in climate science as its leader and spokesman.

This is important because, with the federal government on the sidelines for at least the next four years, the climate movement looks to the electric industry to be a key leader in the fight against global warming. As I frequently say, the power industry historically has been the biggest part of the GHG emissions problem in the United States but we have an even greater potential to be an even bigger part of the solution.”

Fanning’s comments stand in contrast to the stated position of EEI, the trade association for investor-owned electric utilities that he chairs, which in recent years has said climate change is “one of the biggest energy and environmental policy challenges this country has ever faced.”

EEI also stated, when President Obama released his Climate Action Plan, that the “electric power industry has long understood the importance of addressing climate change and has been a leader in reducing criteria pollutants and greenhouse gas (GHG) emissions over the last two decades.”

Indeed, when EEI discusses climate change it typically mentions the fact that the U.S. power sector carbon dioxide emissions have decreased over the years as if to suggest they are leading this transition to stop climate change. But in reality, many investor-owned utility companies have seen their carbon dioxide emissions decrease over the years in part due to state policymakers and voters enacting renewable energy standards, combined with tax credits, that force utilities to generate renewable energy (Fanning even admits tax policy drives their investment in solar). Energy efficiency laws and conservation measures have also played a role. And of course the fact that market forces are causing utilities to burn natural gas instead of coal. (It is worth noting that environmental regulations have only played a small role in the industry’s transition from coal to natural gas and renewables, but the utility industry often sues and/or lobbies to prevent these regulations: CSAPR; MATS; NAAQS for PM and Ozone; CPP; Effluent Guidelines.)

But as Crane writes, “At some level, don’t we deserve to be served by an electric industry that has some core principles that do not shift with the political winds?”

Their silence over Fanning’s remarks occur as the Mauna Loa Observatory reports that carbon dioxide has passed 410 parts per million – a level that the planet hasn’t reached in millions of years. 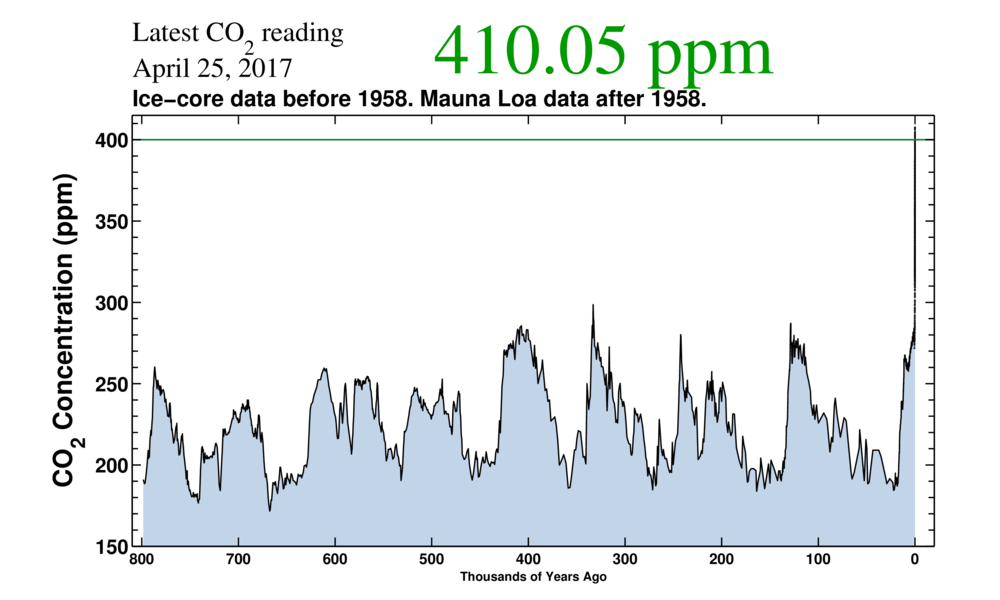 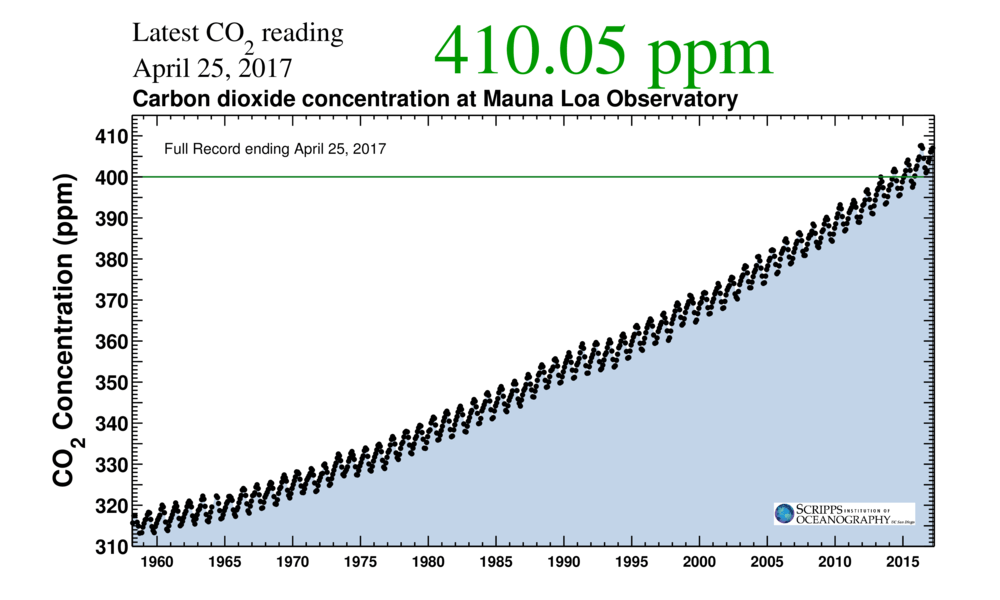 It is not known what Fanning does believe is causing the climate to change. But Southern Company, which is one of the country’s largest carbon dioxide emitters, was recently funding climate denier Willie Soon, a researcher at Harvard-Smithsonian Center for Astrophysics, who published research that said the sun is the driving force of climate change. According to the Guardian,

“From 2005, Southern Company gave Soon nearly $410,000. In return, Soon promised to publish research about the sun’s influence on climate change in leading journals, and to deliver lectures about his theories at national and international events, according to the correspondence. The funding would lead to “active participations by this PI (principal investigator) of this research proposal in all national and international forums interested in promoting the basic understanding of solar variability and climate change,” Soon wrote in a report to Southern Company.”

Fanning was questioned about the funding at Southern Company’s Annual General Meeting in 2015. He said, “I was not aware of the relationship with Willie Soon … please understand that I have assiduously avoided, I’m very public about this, weighing into climate science. That’s not my role. My role is to develop solutions.”

If carbon is not a problem, why build Kemper and Vogtle?

The irony in Fanning’s climate denial is that he is overseeing the construction of Southern Company’s Kemper “clean coal” power plant and the Vogtle nuclear plant. Fanning has grounded his rationale in building both plants in a “tremendous need” for carbon capture to reduce emissions across the globe and said that the technologies are useful in a carbon-constrained world.

Meanwhile, the Kemper plant has been a boondoggle, costing over $7 billion to date, rather than the $2 billion Southern originally promised to Mississippi ratepayers, and it has been plagued by engineering problems. The company just admitted that it likely will never burn coal as intended. The $17 billion (and also over-budget) Vogtle plant now seems like it may be headed to a similar fate. Southern’s contractor to build the plant, the Westinghouse Electric Co, just declared Chapter 11 bankruptcy and has said it’s done building nuclear power plants. Vogtle is still years away from completion, and now a Georgia utility commissioner is conceding that it may never be finished.

On March 9, EPA Administrator Scott Pruitt appeared on the same CNBC show and was asked the same question: “Do you believe that it’s been proven that CO2 is the primary control knob for climate?”

“No, I think that measuring with precision human activity on the climate is something very challenging to do and there’s tremendous disagreement about the degree of impact. So no, I would not agree that it’s a primary contributor to the global warming that we see” answered Pruitt.

Anne Slinn, executive director for research of the Center for Global Change Science at the Massachusetts Institute of Technology told Politifact, “Pruitt is incorrect. CO2 is a primary contributor to global warming. That fact is not in dispute among climate scientists.”