Should America Pick A Secretary of State Who Faces Fraud Investigations? 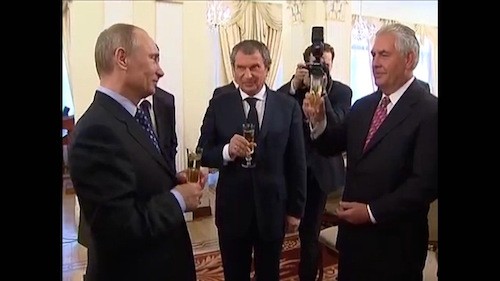 Among the most disturbing aspects of Rex Tillerson’s confirmation hearing — he failed to disavow the idea of “a national registry for American Muslims”; he declined to offer an opinion on whether Vladimir Putin (pictured above with Tillerson) had committed war crimes; he said he didn’t view climate change “as the imminent national security threat that perhaps others do”; and more — was his general refusal to answer questions about ExxonMobil, the company where he has worked for 41 years and where he has been the CEO since 2006.

The members of the Senate Foreign Relations Committee were entitled to ask Tillerson about his career, his successes and failures, and the record of the company he has run, including its relationship with Vladimir Putin’s Russia and its conduct with respect to climate change.

When asked by Senator Tim Kaine (D-VA) about the ongoing controversy about whether Exxon knew about the magnitude of the climate change threat, but concealed it from the public, Tillerson replied with a prepared answer: “Senator, since I’m no longer with ExxonMobil, I’m in no position to speak on their behalf. The question would have to be put to them.” When Kaine persisted, asking.”Do you lack the knowledge to answer my question or are you refusing to answer my question?,” Tillerson responded, “A little of both.”

The Senate should reject Tillerson’s response as entirely inadequate. The Senate, and the public, have a right to answers regarding Exxon’s conduct while Tillerson was at the helm — especially because Exxon’s alleged deceptions on climate change are, right now, the subject of multiple federal and state law enforcement investigations.

Investigative reporting in the past year demonstrated that Exxon scientists have known and had told Exxon management for decades that burning fossil fuels was heating up the planet. But rather than educate the public on the dangers and change its business strategy, Exxon instead spent millions supporting efforts to publicly question and deny the science of climate change. There also are questions as to whether ExxonMobil has properly accounted for its oil reserves in the wake of global price drops and evidence of global warming.

Responding to those reports and other evidence, New York attorney general Eric Schneiderman issued a subpoena to ExxonMobil in November 2015. In response, ExxonMobil has provided Schneiderman with more than 700,000 pages of documents relating to climate change. On October 26, 2016, a New York judge ordered ExxonMobil to give Schneiderman additional records.

Yesterday, a Massachusetts judge handed Healey a big victory, ordering ExxonMobil to comply. Suffolk County Superior Court Judge Heidi Brieger firmly rejected the company’s claim that Healey was on a political crusade or acting out of bias against the company.

ExxonMobil has responded aggressively to these investigations, filing an unprecedented federal lawsuit in its home state of Texas, in which it seeks to question under oath both Healey and Schneiderman about their motives for investigating the company. The judge in the case initially give ExxonMobil the green light to conduct such a probe, but he has backed off, for now, after the two attorneys general complained to a federal appeals court.

In the wake of her court victory over the company yesterday, Healey said, “Exxon must now end its obstructive tactics and come clean about whether it misled Massachusetts consumers and investors about what it knew about climate change, its causes and effects.”

But the New York and Massachusetts investigations are not the only ones focused on ExxonMobil and climate change. ExxonMobil also faces an investigation from the U.S. Securities and Exchange Commission, initiated in August 2016, examining a similar set of issues. In addition, in January 2016, the U.S. Department of Justice, responding to a congressional request to investigate ExxonMobil, referred the matter to the FBI.

There are a number of reasons to be concerned about Tillerson, not least that a man who has built a close business relationship with Putin and received Russia’s Order of Friendship decoration is the wrong choice to check the wildly pro-Putin impulses of Donald Trump and designated national security adviser Michael Flynn. But the law enforcement investigations are a central problem.

If Tillerson were confirmed as Secretary of State, he would take the job under a cloud. Law enforcement agencies are actively investigating the allegedly deceptive behavior of the company he ran. He might be tied up in the litigation, with his own conduct at issue, and be forced to answer questions from investigators working for his own government. At the other extreme, Tillerson’s powerful role in the government might create pressure for federal investigators to ignore the facts and shut down the investigation, especially under a president who shows little disregard for rules or ethics.

Given the ongoing fraud investigations against his company, the Senate should not confirm Tillerson, especially if he refuses to address senators’ questions, right now, about ExxonMobil and climate change.