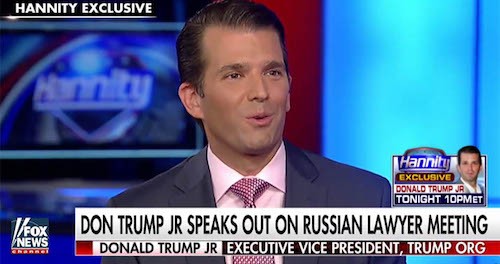 Last night the New York Times posted a story that quoted unnamed “friends” of the Trump family floating a new defense for the June 9, 2016, meeting that Donald Trump Jr. set up with a man who promised “official documents and information that would incriminate Hillary and her dealings with Russia and would be very useful to your father…. part of Russia and its government’s support for Mr. Trump.”

For the president, friends said, the pain of seeing his son ensnared in the Russia scandal was real. In part, that is because, of all his children, he has had the most complicated relationship with Donald Jr., who was a teenager when his parents divorced and did not speak to his father for a year.

Friends who have known the Trump family for many years said they believed Donald Trump Jr., in setting up the meeting, was only focused on trying to help — and even impress — his father with information that could help his campaign.

Or, as Jack Donaghy once said, “I only act out because I want your love.”

Donald Trump Jr. is executive vice president of the Trump Organization. According to the company’s website, Trump Jr. has “extensive real estate development experience, rigorous education and inherent business sense” which “add a level of detail and depth to the management of all current and future Trump projects.” The Trump Organization is America’s 48th largest private company, with $9.5 billion in revenues last year.

Like his father, Don Jr. is a graduate of the University of Pennsylvania’s Wharton School of Business, consistently ranked as one of the top business schools in the nation.

In June 2016, Donald Trump Jr. was 38 years old. That’s just five years younger than John F. Kennedy was when he was elected president. You can bet that if JFK took a 1960 meeting with the Russian government to get dirt on Richard Nixon, his opponents wouldn’t be letting him off the hook because of his age or desire to please his dad, old Joe Kennedy.

Don Jr. is also sufficiently sophisticated that he knows how to maximize Trump Organization revenues through his father’s kleptocratic presidency. Not only do he and his adult brother Eric demand Secret Service protection when they travel overseas for business meetings, not only do they lack the class to reimburse taxpayers for the costs of such protection from the multibillion dollar revenue of their company, but now it turns out that State Department staff who help provide security logistics for these trips paid more than $15,000 of taxpayer money in February to use 19 rooms at the new Trump hotel in Vancouver when Don and Eric where there to promote the grand opening. Kleptocracy in action.

At least two other people received the email pitching the Russian dirt and then attended the meeting. One, Jared Kushner, was a wee lad of 35, but he was sufficiently sophisticated that, according to a startling McClatchy report posted yesterday, Justice Department and congressional investigators “are examining whether the Trump campaign’s digital operation – overseen by Jared Kushner – helped guide Russia’s sophisticated voter targeting and fake news attacks on Hillary Clinton in 2016.”

The other attendee, Paul Manafort, was 67 years old in June 2016. He had a world of experience getting paid to advance the interests of Russian oligarchs and pro-Russian Ukrainian politicians. Whatever Manafort’s relationship with his late father, he knew what he was doing at the meeting.

And at the time of the June 2016 meeting, Donald Trump Sr. was five days short of his 70th birthday. On June 7, 2016, Don Jr. finalized with music manager Ron Goldstone a time to meet on June 9 to hear the promised revelations about Hillary Clinton and Russia. On the evening of June 7, the final night of GOP primaries, Trump addressed a New York ballroom audience and promised, “I am going to give a major speech on probably Monday of next week, and we’re going to be discussing all of the things that have taken place with the Clintons. I think you’re going to find it very informative and very, very interesting…. Hillary Clinton turned the State Department into her private hedge fund — the Russians, the Saudis, the Chinese — all gave money to Bill and Hillary, and got favorable treatment in return.” Could be a coincidence, or not.

These were not sad little boys. They were adults, who knew what they were doing. They appeared ready to accept help from the Russian government to swing the election their way. This latest defense is as disgraceful as the Trump team itself. 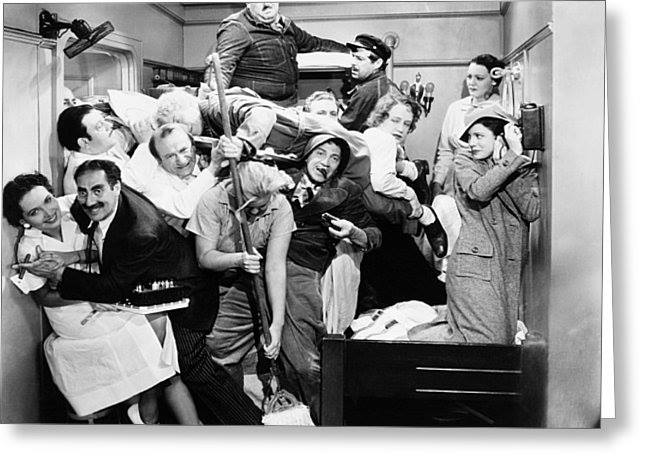