posted at 8:16 am by David Halperin 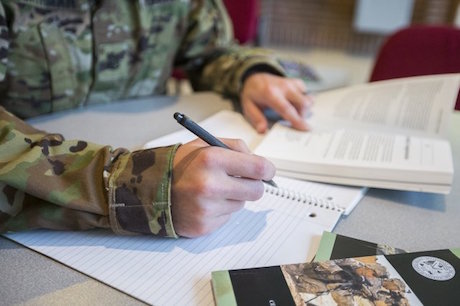 The U.S. Department of Defense has announced a new policy for addressing misconduct by colleges that receive DoD Tuition Assistance (TA) money to educate military service members. According to a report in Military Times, in unveiling its plan at a military education conference last week, “DoD stressed that its primary goal is to identify potential problems and make corrections when needed — not to punish schools or ban them from the TA program.”  The report quotes Jonathan Woods, deputy chief of DoD Voluntary Education Programs, as describing the new process as “emphatically and unequivocally about remediation,” not enforcement.

To implement the plan, the Pentagon has hired the auditing firm PricewaterhouseCoopers (PwC), which will each year evaluate 250 of the some 2,000 for-profit, non-profit and public schools participating in the TA program — 200 picked at random and another 50 that notably differ from other schools in factors like course completion, graduate rates, and student complaints. PwC will then select 25 of the 250 for closer scrutiny, and then up to 5 of those will get an on-campus review, if necessary. Then, any schools determined to be out of compliance with DoD regulations will have six months to fix the problems.

It all sounds like a great PowerPoint presentation that PwC showed Pentagon officials at some point. The only problem is, it suggests a lax regime — a numerically limited number of reviews and weaker enforcement — under which predatory colleges may have an easier time abusing members of the armed forces: deceptively recruiting them and signing them up for expensive programs that are unlikely to advance their careers but likely to leave them deep in debt.

Blatant, egregious waste, fraud, and abuse by for-profit schools, paid with taxpayer dollars, has been well-documented by government and media investigations and was expressly called out by President Obama: In 2012 remarks at Fort Stewart, Georgia, Obama called the conduct of some for-profits “appalling” and “disgraceful,” and he highlighted abuses, such as the recruitment by for-profit Ashford University of a Marine with a brain injury. Obama told soldiers, “there are some bad actors out there.  They’ll say you don’t have to pay a dime for your degree but once you register, they’ll suddenly make you sign up for a high interest student loan.  They’ll say that if you transfer schools, you can transfer credits.  But when you try to actually do that, you suddenly find out that you can’t.  They’ll say they’ve got a job placement program when, in fact, they don’t.  It’s not right.  They’re trying to swindle and hoodwink you.  And today, here at Fort Stewart, we’re going to put an end to it.”

On Sunday, higher education expert Barmak Nassirian offered on Twitter this apt description of the new Trump/PwC approach: “DoD WILL HELP CHEATERS WHEN CAUGHT.” Anyone who has studied the bad actors in this industry, many of which are under law enforcement investigation for fraud, knows that counseling is not the right approach for these cynical habitual offenders.

The Pentagon has rolled out its new plan without serious consultations with some key veterans’ groups that have strongly advocated for stronger protections against college abuses.

The Obama Administration developed tough standards to help protect our troops and their well-earned TA money from predatory colleges. But that work came under fire from Senator John McCain after the biggest, richest for-profit college company, Apollo/University of Phoenix, was caught red-handed evading the rules.

McCain has engaged in a years-long tantrum against Pentagon officials who have sought to hold Apollo, his wealthy home state business, accountable for documented abuses of U.S. troops and veterans.  Apollo has provided McCain with generous campaign contributions. McCain demanded that the Obama Administration disband its interagency task force addressing for-profit college abuses, and give equal priority to investigating non-profit and public schools, even though the evidence is clear that most abuses are by for-profits. As McCain is the chairman of the Senate Armed Services Committee, and especially now that Donald Trump, the former head of predatory Trump University, has replaced Obama, the conditions were, I guess, ripe for the Pentagon to abandon determined efforts to hold abusers accountable.

Making matters worse is the delegation of Pentagon oversight to a private company, especially because PwC has repeatedly provided audit services, with respect to troubling activities, for some of the worst-behaving for-profit colleges, including Corinthian Colleges, ITT Tech, CollegeAmerica/Stevens-Henager, and DeVry.

As PwC presumably wants to keep getting hired by such for-profit colleges, it is a stark conflict of interest to put the firm in charge of evaluating the colleges for potential misconduct.

U.S. troops work in difficult conditions for low pay.  They put their lives on the line to defend our country. The Pentagon should always put them first. Here, it appears, DoD officials may be buckling to the demands of the wealthy for-profit college industry, and of a powerful senator who has repeatedly taken campaign donations from the industry. But the policy does seem to match the agenda of our new president, who pledged as a candidate to end waste, fraud, and abuse in government, to stand up for the forgotten man and woman, and to fight for our service members and veterans, but who seems bent on breaking those promises in every way.