posted at 6:23 am by David Halperin 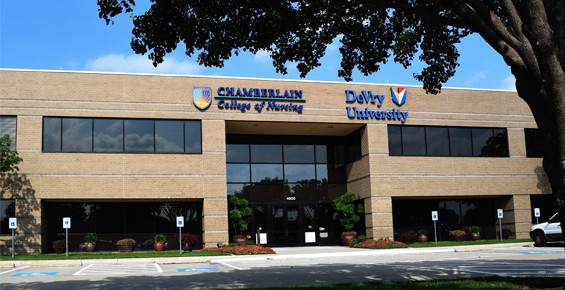 In nursing schools across the country, students are complaining that administrators have suddenly sprung on them new requirements that they pass comprehensive tests before they can graduate. Some of these students charge that their school has added these new test requirements mid-course to weed out students who might be in danger of flunking the national nursing licensing exam, because only graduates can take that exam, and schools that have low passage rates risk losing their own state licenses to operate.

Some national higher education experts believe the students are right.

The Houston Chronicle reported last month that several Texas campuses of Chamberlain College of Nursing, owned by for-profit college giant DeVry Education Group, had changed its rules, requiring students, some just weeks away from graduation, to pass cumulative course tests on the first try in order to pass and obtain their degree. Instead of getting a second chance at the test, as Chamberlain previously permitted, students who flunk must now retake the entire course before trying again.

The new requirement came after the Texas state Board of Nursing, in January, barred Chamberlain from enrolling new students, citing low passage rates on the NCLEX nursing license exam. The board said Chamberlain would have to raise that rate to 80 percent before it could begin admitting students again. Students told the Chronicle they believed the aim of the new Chamberlain rule was to prevent some students from graduating, and thus being eligible to take the NCLEX, in order to to raise the school’s overall passage rate.

The Chronicle reported that a similar controversy arose last summer at Houston Community College, which faced its own pressure from the Texas nursing board.

Meanwhile, the campus newspaper at the University of Massachusetts-Lowell reported in February that nursing students there are complaining about the school raising the scores that students need to obtain on comprehensive tests to avoid dismissal from the program. In comments posted on the article, students charged that the school’s NCLEX performance was the motivation for tougher internal testing; one wrote, “The only reason UMass Lowell is doing this is because their NCLEX pass rate has been terrible, which is ultimately their fault.”

And in December 2015, the Virginia Department of Veterans Services withdrew its approval for a campus of Medical Careers Institute, part of for-profit ECPI University, to receive GI Bill education funding, because it found the school had engaged in a series of deceptive practices, including introducing a new testing requirement for nursing students without notifying the students of the impact on graduation if they failed to pass.

Some of my colleagues have received similar complaints about suddenly-imposed exam requirements from students at other for-profit nursing schools.

The controversy over comprehensive tests for nursing schools has in fact been around for several years; a 2012 report from the National League for Nursing (NLN) stated that the organization “recognizes the pressure faced by nursing schools to maintain high NCLEX pass rates…. It is the prevalent use of standardized tests to block graduation or in some other way deny eligibility to take the licensing exam that is most concerning to the NLN.”

But these recent media reports and government actions suggest that tensions over the issue are still increasing.

Nursing school officials say they have an obligation to protect public health by ensuring that only qualified nursing graduates enter the profession, and of course that’s true. But one must then ask whether it makes sense for the schools to be admitting so many students who end up unable to benefit from the programs, who commit precious time and money and end up with nothing. Although there are always arguments for giving interested students the chance to try and succeed, concerns about lax admissions standards are heightened when it comes to expensive for-profit nursing schools like Chamberlain / DeVry, which can leave students tens of thousands of dollars in debt (in addition to the costs to taxpayers of subsidizing both public and private college educations).

One education executive wrote me, “This is how you prevent bad scores on NCLEX, required to pass in order to practice as RN. They’re letting everybody in the program, and then clamping down at the end. They get all the revenue, but they do not release transcript to take the [NCLEX] test.” As this executive noted, dropping a student before graduation also helps for-profit nursing schools improve their compliance with the Department of Education’s gainful employment rule, which compares earnings with debt, but only takes into account students who actually graduate. This executive said that nursing schools once offered a challenging entrance exam to screen out applicants at the front end, “but these guys are now apparently just about the money.”

Similarly, higher education expert Barmak Nassirian says, “These are tricks that institutions use to game the metrics…. They will portray it as rigor, patients need adequate care, blah blah blah. But if you’re going to insert a high stakes test, where was it in your bulletin?” referring to the school catalog distributed to prospective and current students. Nassirian told me, “The real problem is they shouldn’t be admitting some students in the first place… You’re obviously not teaching people adequately, or you’re admitting people who don’t have the capacity to succeed.” Indeed, as Nassirian noted, some for-profit schools are not simply admitting unqualified or marginally qualified students; they are relentlessly recruiting them, “chasing after them — advertising, calling them up.” Some students say Chamberlain and other for-profit nursing schools engage in aggressive recruiting behavior.

But the president of DeVry’s Chamberlain College of Nursing denied to me that her school had low admissions standards, or that her school’s new testing requirement is aimed at improving the school’s passage rate for the NCLEX license exam.

DeVry, under new CEO Lisa Wardell, has made a conspicuous effort in the past year to stand out as a better corporate citizen than some others in the for-profit college industry, a sector where numerous bad actors have engaged in egregious abuses against students and taxpayers.  DeVry has committed to meet higher standards than key federal regulations require, and the company agreed to pay $100 million to settle a Federal Trade Commission lawsuit alleging DeVry had for years engaged in deceptive advertising that overstated job placement rates. (DeVry also has been probed or penalized in recent years by at least three state attorneys general and three other federal agencies.) Wardell and other DeVry officials also have made themselves available to advocates for students (including me) to discuss the school’s performance and policy issues.

DeVry has received billions of dollars in taxpayer-funded student aid from the U.S. Department of Education, Department of Defense, and the VA, including $1.47 billion from the education department in the 2014-15 academic year alone.

Susan Groenwald, the Chamberlain president, told me that, at nursing schools, “standardized tests have been used for decades,” and that most nursing schools in Texas use them now. The tests, she said, help students to prepare for the NCLEX and to predict their outcomes. She said that her Texas campuses stopped giving students a second chance to pass, because “our data showed that students who failed it did not improve.” Also, she says, “We didn’t see students attach the level of importance to passing that they should.”

Groenwald also said the school “added resources,” such as new tutoring programs, to help students pass, and that it gave the students ample warning that the change was coming: “We held town halls, and put it in writing; we gave plenty of notice.” She insisted that there was no breach of existing contracts with students: “Our materials and enrollment agreement allow us to make these changes.”

So why were the students unhappy? “Students don’t like change and they don’t like accountability,” Groenwald said. “There is a group that likes to pass through.”

DeVry official Tom Babel, who joined Groenwald on the call with me, said that comprehensive course exams are where education “is going and where employers are going.”

Pressed on why DeVry was admitting students who can’t seem to hack its expensive nursing program, Groenwald said, “I don’t have a crystal ball to say who will be successful.” She says admissions standards are “data-driven …. we have an algorithm for admission.” She said Chamberlain does have an entrance exam, a rigorous one. She added that last year the school, based on data about student success in the program, had adjusted the exam to give more weight to reading and science, and somewhat less to math.

When I asked what Chamberlain’s acceptance rate is, Groenwald said that her admissions staff discourages students from applying if they don’t appear to qualify (a practice which, of course, might push the actual acceptance rate higher than it otherwise would be).  She added, “We don’t allow anyone to be admitted who doesn’t meet our criteria.” DeVry official Tom Babel, who joined Groenwald on the call with me, followed up by email to say Chamberlain’s admissions rate was “roughly 60%.” [UPDATE 04-11-17 11:15 am: Babel tells me the acceptance rate for the 2016-17 academic year is 58.7%.]

At Chamberlain, Groenwald says, “most make it” to graduation.  “We have a few that don’t,” she continued, “A  lot don’t make it because they have to work full-time, even though we don’t advise them to do so. Students just think they can do it.” (The Department of Education’s College Navigator site has very limited information about Chamberlain graduation rates, because many of the state programs are relatively new and because the data measures only first-time, full-time students.)

While acknowledging that Chamberlain’s Houston campus “has a [NCLEX] pass rate challenge,” Groenwald said that the school has 20 other campuses, with the same curriculum, and some have a 100% pass rate.

Why was Houston doing worse? Groenwald responded, “It could be students — we get students who are less prepared for college.” She also said it could have been “the leadership of the campus” — some students who are now nearing graduation enrolled during a “leadership transition.”

Groenwald acknowledged that some states expressly prohibit imposing the kind of requirement Chamberlain has imposed in Texas — giving students just one chance to pass comprehensive exams before they have to repeat a course.

Barmak Nassirian charged that the mid-course insertion of new testing requirements was in part a failure of nursing school accreditors, the private outside oversight bodies that “should be looking at admissions practices and curriculum and instructor quality.”

Steve Kauffman, a spokesperson for the Higher Learning Commission, wrote to me, “This appears to be a level of detail best addressed by a nursing programmatic accrediting agency rather than a regional accreditor like HLC. Regional accrediting agencies look holistically at the institution as a whole, as you likely know.” When I followed up with more specific questions about issues relating to admissions standards, financial aid, and quality of instruction, Kauffman did not respond.

Robert Rosseter, Chief Communications Officer for CCNE/AACN, wrote, “Unfortunately, AACN does not collect data on the use of exams like the one described in the Houston Chronicle article, so it would be tough to guess how widespread this practice is.” He referred me to the National Council of State Board of Nursing. When I replied to Rosseter last week with a similar set of specific questions regarding admissions and instruction, he said he was trying to find a colleague to speak with me, but I haven’t heard back yet.