posted at 6:18 pm by David Halperin 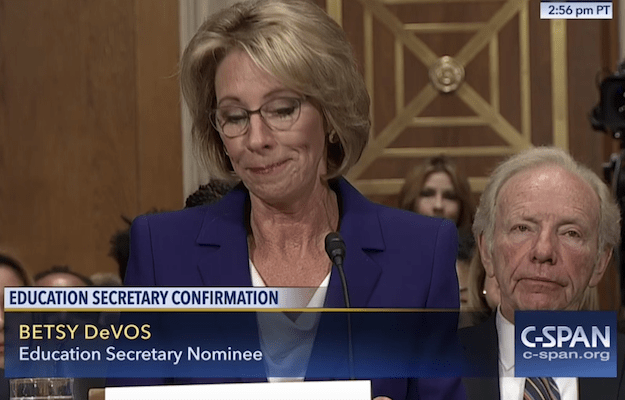 Former Senator Joe Lieberman (D-CT) tonight introduced Donald Trump’s controversial nominee for Secretary of Education, Betsy DeVos, to the Senate HELP Committee. Lieberman lavishly praised DeVos, but failed to inform the American people that his law firm, Kasowitz, Benson, Torres & Friedman LLP, “have represented Trump in all manner of matters since at least 2001. Such matters have included, but are certainly not limited to, the restructuring of $1.3 billion in bondholder debt connected to his Atlantic City casinos; a defamation case filed against the author of TrumpNation: The Art of Being the Donald, for stating that the businessman was worth between $150 million and $250 million, not billions (a suit that Trump later lost); and the fight to keep filings from his 1990 divorce from ex-wife Ivana Trump sealed.”

In 2012, asked about his future work upon his retirement from the Senate, Lieberman promised, “I’m not going to lobby. For sure.” In 2013, as a member of Kasowitz Benson, Lieberman registered to be a lobbyist, representing a Libyan politician.

As soon as the election was over, Trump abandoned his promise to drain the swamp of corruption in Washington and stand up for working people.  His appointment of entitled billionaire Betsy DeVos, who has financial investments in education companies, has favored privatization over public education, has failed to finalize the necessary paperwork with the Office of Government Ethics prior to her hearing, has contributed millions to the Republican Party, and is now opposed by leading civil rights and education groups and 68 members of the congressional black, Hispanic, and Asia Pacific American caucuses, is part of this betrayal.

Joe Lieberman’s invocation of his Democratic Party credentials to endorse DeVos, without mentioning out loud to the American people that his law firm has long worked for Trump, is yet another piece of the deep corruption Trump is bringing to Washington.