King Donald, Get Used to Losing 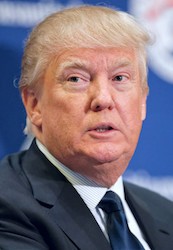 I once worked as a speechwriter, so sometimes I get speeches in my head. Like tonight, after two federal judges dealt a setback to Donald Trump’s Muslim immigration ban. If you’re speaking at a protest this week, and you need material, feel free to borrow.

King Donald, you’re right — you do have tremendous energy! Tremendous. One week and you’re already the worst president in US history. It’s unbelievable.

You delivered an inaugural speech that was divisive and hateful.

You already broke your promise to working people by appointing lobbyists, billionaires, anti-worker CEOs, and Goldman Sachs bankers to your government.

You refused to do what every reputable expert urged you to do: divest from your businesses. Instead your business lieutenants are aggressively touting your new power in order to sell your hotel rooms and club memberships. Maybe next they’ll be restarting your predatory Trump University.

As you and your cronies get richer, Americans get poorer.

You started tearing up the health care system that protects so many people, with no plan to replace it.

You chose an uninformed enemy of public schools, Betsy DeVos, to be Secretary of Education.

You declared that taxpayers’ money will be spent instead on a pointless wall, nothing more than a symbol of your fear and bigotry, and you took a break from tweeting at Meryl Streep, SNL, and Hamilton, to resume hurling insults at an entire nation, our neighbor Mexico.

You continued your bizarre love affair with the Russian dictator Putin. And you picked his business partner Rex Tillerson to be Secretary of State.

You abandoned America’s urgent work to slow the undeniable danger of climate change, and you picked the polluters’ best friend Scott Pruitt to trash the EPA.

You picked an enemy of civil rights, Jeff Sessions, to be our attorney general, just as you attacked our great civil rights hero John Lewis.

You’ve stocked your White House with angry anti-muslim bigots like Flynn and Bannon.

You told the nation that torture works, so you’re for it. King Donald, if you decided that the police shooting suspects on the street, instead of arresting them, “works,” would you endorse that?  King Donald, torture is against the law.

And you capped off your first week with an illegal, anti-Muslim immigrant ban — not based on facts, not focused on the threats to our people, but based on fear and prejudice.

It’s a ban that punished honest people fleeing unspeakable violence.  It’s a ban that locked up courageous people who risked their lives helping our government.

But on Saturday night, King Donald, not one but two judges blocked your Muslim ban — they said it was illegal.

They made you a loser.

People of good will are gonna fight this arrogant, childish, bigoted tyrant.  People who voted for Trump are turning away, wishing they hadn’t.

And we will have racial justice, and safe communities, and the right to vote.

And we will defend and preserve a free press that tells the truth instead of spreading lies, like you do, King Donald.

And we will make our country safe, protecting ourselves without resorting to torture, without Guantanamo and secret prisons, and all the other things you support that would actually weaken America.

King Donald, you are a loser. King Donald you will lose.

King Donald, we will defeat you.