posted at 4:04 pm by David Halperin 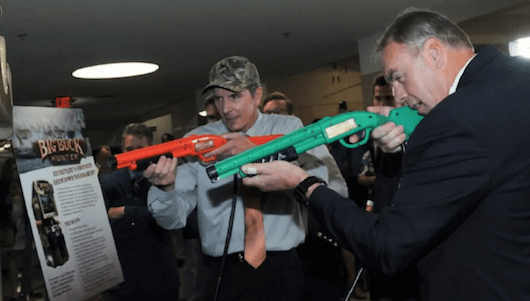 Let’s count some of the ways:

1. As reported just today, Zinke has been and remains active in funneling money to scam political committees that rip off elderly donors by taking their money and then mostly keeping it for executive and consultant salaries.

3. As Secretary, Zinke has repeatedly used private charter planes, including a charter flight from Las Vegas to his Montana hometown on a plane owned by fossil fuel company executives, and charters between Caribbean islands ― all on routes where commercial flights were available.

4. Zinke concealed as a congressman from Montana that he’d been living in California, not Montana.

5. Zinke punitively reassigned many of his agency’s senior employees ― for example moving Interior’s chief climate policy expert to the royalty collection division; he also named only political appointees, including several ex-industry lobbyists, to a Department committee on personnel issues, ignoring that career staff are supposed to be part of the process.

6. Zinke, in a speech last month to an oil industry group, praised hydraulic fracturing, which has poisoned the water in communities across the U.S. and poses tremendous risks of gas leaks and increased global warming. “Fracking,” he said, “is proof that God’s got a good sense of humor and he loves us.”

7. Zinke has proposed to the White House that several national monuments be dramatically shrunk and opened for mining and drilling.

8. Zinke requires his security staff to hoist a special secretarial flag on the Interior Department’s roof whenever he’s in the building, and to remove it when Zinke departs. In addition, as the Washington Post reported, “He has commissioned commemorative coins with his name on them to give to staff and visitors, but the cost to taxpayers is unclear.”

9. Zinke last month told an oil industry group that nearly one-third of Interior Department employees are not loyal to him and Trump. He might have been understating matters, depending on your definition of loyalty. Probably more than a third now think that Ryan Zinke is a disgrace.