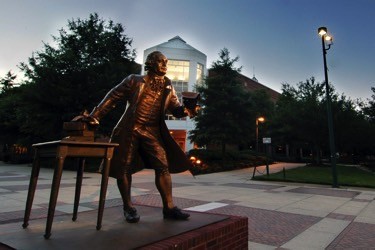 Today, students at George Mason University sued their school and a private foundation tied to the school in a Virginia state court, seeking records related to donations from the billionaire Koch brothers.

The students are concerned that Koch donations to GMU, a state university, come with inappropriate conditions; they launched their campaign on this issue in 2014 after learning that the Charles Koch Foundation, GMU’s biggest donor, had sought influence over faculty hiring and teaching curriculum, for example through a grant agreement with Florida State University.

Charles and David Koch, heirs to the $100 billion energy and chemicals corporation Koch Industries, have for decades sought to push a conservative agenda, seeking to influence politics but also investing heavily in academic programs that conform nicely with the brothers’ financial interests.

As more and more state universities have created private foundations to assist with fundraising, there have been controversies and legal disputes across the country focused on the risks of private influence over public institutions — and over lack of public access to information about these dealings. Legislatures and courts in a number of states have required disclosure of information from private foundations associated with state schools.

The George Mason students, members of a group called Transparent GMU, believe Virginia’s students and citizens are entitled to the same kind of information.

I have provided advice to this student group in the past, as well as a national group called UnKoch My Campus that shares its goals.

“We haven’t been able to get answers from the administration, and it’s important for the students and public to be able to look at the records and decide what’s in them,” GMU student Gus Thomson told me.

“Our concern is, this is a public university, and they’re not doing this for the public interest; they’re doing it for private interests. When these donors give money, what do they get in exchange? We want to know what strings are attached. We want to ensure academic integrity in our curriculum,” said Thomson, a junior originally from Winchester, VA.

“It’s disappointing to see the Foundation turn away students who are justifiably concerned about donor influence at their university—especially when Virginia’s open records law is so clear,” Appalachian Mountain Advocates attorney Evan Johns, who represents Transparent GMU, said in a press statement. “The law simply does not allow a public university to conceal its records by outsourcing its public business to a private company.”

Samantha Parsons, a 2016 GMU graduate, now works for UnKoch My Campus. She told me, “The Charles Koch Foundation has a history of giving ‘philanthropic’ donations to universities to buy influence over hiring of faculty and curriculum development. A donor should never have that type of say over academia, no matter how big the check is. This type of donor overstep is a prime example of why the activities of public institutions, including universities, should always be transparent– it helps active citizens hold those institutions accountable to the public, not private interests.”

As a public institution, GMU should only be making deals with donors that are consistent with the public interest, that would make its students, faculty, staff, alumni, and Virginia residents proud. GMU should not be able to hide such deals from public view through its private foundation.