Earth Day 2017: The New EPA and the Looming Climate Apocalypse

posted at 3:47 pm by David Halperin

This is a guest post by Dick Russell, author of a new book, coming out next week: Horsemen of the Apocalypse: The Men Who Are Destroying Life On Earth – And What It Means To Our Children, edited and with an Introduction by Robert F. Kennedy, Jr. 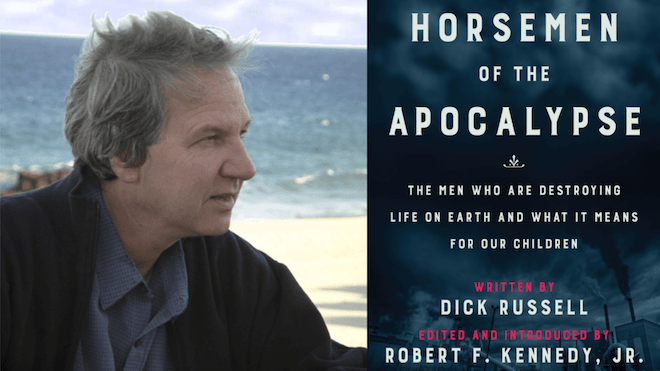 Closing in on half-a-century since the first Earth Day and the beginning of the Environmental Protection Agency, it’s all come down to this: the new EPA administrator, Scott Pruitt, is being provided a “24/7 security detail.”

This line item in the new agency budget was revealed by the Washington Post on the same day that Pruitt told a group of Pennsylvania coal miners that a new age of environmental deregulation was at hand. Oversight of the Clean Air Act and Clean Water Act passed by Congress during the EPA’s first years would soon devolve to the states and in favor of more job creation in the fossil fuel industry.

His own agency’s budget would be slashed by nearly one-third, resulting in layoffs of thousands of employees and termination of dozens of longstanding programs including lead toxicity, pesticide safety, and environmental justice. At the same time, Pruitt said in an interview on Fox & Friends, the Paris climate agreement signed by almost 200 nations late in 2015 is “something we need to exit in my opinion. It’s a bad deal for America.”

And a far worse deal for the climate emergency our earth is facing. I’d first learned about Pruitt while doing research in Oklahoma for my forthcoming book, Horsemen of the Apocalypse. He was the protégé of Harold Hamm, a self-made fracking billionaire who’d been Pruitt’s main financial supporter during his two terms as Oklahoma Attorney General. Hamm, invited to speak at last summer’s Republican Convention, became Donald Trump’s chief energy adviser during the presidential campaign.

I’d largely completed the book a month before the 2016 presidential election, including a detailed investigation into Hamm and his cronies. But I never imagined that he, Pruitt, and a host of others profiled would soon assume the pinnacle of power. Suddenly, ExxonMobil CEO Rex Tillerson – who participated in the corporation’s cover-up of its own scary scientific evidence about climate change and its ongoing funding of deniers – ascended to run the State Department, in charge of America’s international climate negotiations. Suddenly, the oil-and-gas billionaire Koch brothers found their installed U.S. Congressman from Kansas at the helm of the CIA.

It was like a perfect storm. As Robert F. Kennedy, Jr., came to write in the introduction to Horsemen, “With the central goal of preserving their fossil fuel profits, they guided an inexperienced president on a course that rapidly collapsed the foundations of America’s moral authority and idealism, and fundamentally altered the relationship between America and the world – including our reputation as a global force for good.”

How far we’ve come from what the late Barry Commoner, a founder of modern ecology, once said: “Earth Day 1970 was irrefutable evidence that the American people understood the environmental threat and wanted action to resolve it.” Today, we have someone running the EPA who publicly rejects the very idea that climate change is caused by fossil fuel emissions, and who scoffs at warnings from his own agency’s scientists that the widely-used pesticide, chlorpyrifos, should be banned because it poses severe harm to children and farm workers. Rather, Pruitt wants to ensure “regulatory certainty” for the manufacturer, Dow Chemical, the company that along with Monsanto once brought us Agent Orange.

Over these first hundred days of the Trump administration, four former EPA administrators, including two Republicans, have expressed their dismay over the dismantling. These include Christie Todd Whitman, who served under George W. Bush, and has said:

“I don’t recall ever having seen an appointment of someone who is so disdainful of the agency and the science behind what the agency does.”

Disdain for the past five decades of environmental progress is the hallmark of this new era. At a recent gathering of the G-7 energy ministers, where everybody except the U.S. is calling for a transition to renewable energy sources, our negotiators even rewrote the joint statement to emphasize that hydrocarbons “including coal and natural gas will remain part of the global energy mix for the foreseeable future.” That should please just-retired Peabody Energy executives Greg Boyce and Fred Palmer, also the subject of a chapter in my book.

The almost unthinkable tragedy for future generations is that their apocalypse is imminently upon us. As Robert F. Kennedy, Jr., concludes: “If we’re to leave behind a habitable world, the Horsemen need to be reined in, bridled, and broken.” The nationwide Climate Mobilization on April 29 is the next big step in humanity’s fight to save our civilization and the natural world.