posted at 7:45 pm by David Halperin 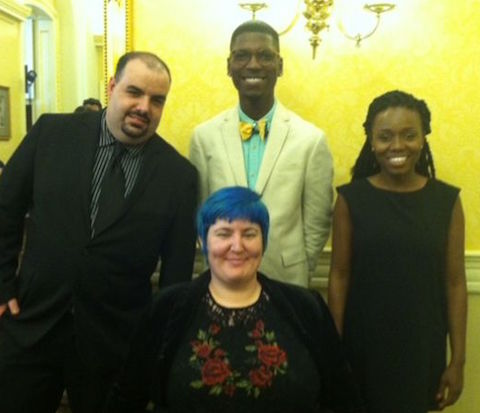 This week, the Department of Education is holding hearings (Monday in DC, Wednesday in Dallas) at which members of the public can comment on Secretary of Education Betsy DeVos’s announcement that she will conduct a “Regulatory Reset” – a new round of rule-making proceedings to reconsider two college accountability rules issued by the Department in the Obama Administration. These rules are: (1) the gainful employment rule, which cuts off federal aid to career education programs that consistently leave students with overwhelming debt; and (2) the borrower defense rule, which (a) creates a process for defrauded students to have their loans cancelled, (b) bars colleges from denying students the right to sue in court for injuries, and (c) requires financial shaky colleges to post financial guarantees.

DeVos has announced she is suspending many key provisions of these rules pending her review process. Last week, in seeking to justify her latest delay moves, DeVos engaged in blatant misrepresentations, just as paid lobbyists for the for-profit college industry engaged in their own distortions and triumphalism over the Trump administration’s abandonment of accountability measures for predatory schools.

Below is the comment I will present Monday morning. [Update 07-11-17: I have slightly edited and expanded the text below to conform to the written comment I submitted today to the Department of Education.]

TO THE U.S. DEPARTMENT OF EDUCATION

The Department has announced its intention to establish two negotiated rule-making committees that will revisit the Borrower Defense to Repayment and Gainful Employment regulations issued during the Obama Administration. Secretary Devos has delayed implementation of major components of both rules. The Department is accepting public comments on this action and suggestions for additional topics that should be considered for action by the negotiating committees.

My comment is that, in order to fulfill its obligations to protect students and taxpayers, and to obey the law, the Department must cancel the rulemaking and immediately enforce the existing rules.

For decades the U.S. government has failed to adequately address an epidemic of waste, fraud, and abuse by for-profit colleges using taxpayer dollars.

There are good schools, great teachers, and outstanding students in for-profit higher education. But there are many bad, predatory companies, big and small, and the Department of Education’s failures to establish and enforce strong rules has meant that those bad companies are not compelled to stop misbehaving. It’s meant a race to the bottom: the more colleges abuse students, the more they commit fraud, the more money they make.

Their disgraceful behavior has been documented by the Senate HELP committee[2] and numerous media investigations.[3] I have spoken with hundreds of students, staff, faculty, and executives, who have described broad patterns of abuses. There have been in recent years scores of law enforcement investigations and actions against for-profit schools.[4]

In the absence of strong accountability measures, demand from for-profit college owners for quick profits has led to relentless pressure to sign up as many students as possible, regardless of whether the program would help them.[5] To charge astronomical tuition, often ten times the price of community college, sometimes effectively twice as much as Harvard or Stanford[6], yet spend far too little on teachers and instruction.[7] To give false information to students — about accreditation, selectivity, job placement, and starting salaries, and to give false information to the Department.[8] To use bait and switch lead generation tactics[9] and high pressure sales pitches.[10] To fake students’ high school diplomas[11] and financial aid status.[12]

A librarian at Everest College called me, heartbroken, because the school admitted a student who was severely mentally disabled, could barely read. He wanted to be a police officer, but that couldn’t happen. Everest enrolled him in its criminal justice program and took his money anyway.[13] Its owner, Corinthian Colleges, was getting $1.4 billion a year from taxpayers.

A Florida mom, Sara Pierce, was misled by a Kaplan recruiter into signing up for an online Nutrition Science program that, she learned way too late, lacked the accreditation to get her the job she sought.[14] Tiffany Nesbitt and other dental assistant students at a Kaplan school in Charlotte had the same complaint, leading to an attorney general probe and shutdown of the program.[15]

Mike DiGiacomo, an army veteran who wanted to design video games, was misled by not one, but two big chains, EDMC and Career Education Corp., and left with worthless credits and $90,000 of debt.[16]

The University of Phoenix reported a four percent graduation rate in its online division. It engaged in serious abuses recruiting American troops on U.S. military bases.[17] The company has been getting as much as $2 billion a year from taxpayers.

There has been bad behavior also at ITT, DeVry, Globe, Vatterott, Bridgepoint, ATI, FastTrain, Marinello, Westwood, CollegeAmerica, and many others.[18]

More than half of the students who have enrolled in for-profit colleges dropped out within about four months.[19] The Department has reported that 72 percent of the for-profit college programs it analyzed produced graduates who, on average, earned less than did high school dropouts.[20] A May 2016 study published by the National Bureau of Economic Research concluded that for-profit college students, graduates and dropouts combined, earned less after leaving school than they did before they enrolled.[21]

Today, 10 percent of all college students attend for-profit colleges, on campuses and online — but these institutions account for 40 percent of student loan defaults.[22] For-profit schools are driving a national student debt crisis that has reached $1.3 trillion in borrowing. They absorb 20 percent of all federal student aid, diverting sums from better, more affordable programs at nonprofit and public colleges.[23]

The result – hundreds of thousands of Americans with their financial futures ruined. Some came to the last Department rulemaking on borrower defense to tell how they had been deceived and left with huge debt.[24]  The hardest hit are our troops and veterans, single mothers, people of color, and older Americans.

And the abuses, contrary to what the industry wants you to believe, are still widespread. I get phone calls nearly every week from current and former employees of for-profit schools regarding ongoing fraud and deception at their companies. (I report on these matters at RepublicReport.org and also frequently provide such information to the Department, to federal and state law enforcement agencies, and to news media.)  Look at army.com, a website that some might believe is an official military website but serves as a front, recommending for-profit Grantham University as the result of every education search; look at other military-branded websites that are similarly deceptive.[25]

The problems have been made worse because for-profit colleges impose forced arbitration clauses that keep bad practices concealed and unpunished.

And because there has been almost no debt relief for students who were defrauded by colleges they believed had the Department’s seal of approval.

The previous administration had started getting a handle on the problem. It cancelled recognition of weak accreditor ACICS.[26] It rejected the conversion to nonprofit status of a school that continued to enrich the prior owner, Carl Barney.[27] It stepped up enforcement against abuses and began reviewing defrauded students’ claims for debt relief.[28]

And after extensive rulemaking, it established the gainful employment and borrower defense rules. These rules are in fact not as strong as they should be to address serious wrongdoing and performance weaknesses in the career education sector.[29] However, the reforms would make a big difference: They would save taxpayers billions and help students by alerting the public to, and eventually weeding out, poorly-performing programs[30] and channeling federal aid toward programs that are actually helping people train for careers.[31] The issuance of the gainful employment rule already has had a strong, positive effect by helping convince schools to shut down programs that weigh down students with overwhelming debt.[32] Meanwhile, numerous for-profit college companies say they can comply with the rule and continue to thrive.[33]

Now, before even starting a new negotiated rulemaking, the Department has suspended much of the rules, which is contrary to law.[34] And given remarks by Secretary DeVos and her spokespersons[35], and the demands of the for-profit college industry, students and advocates for students have reason to be concerned that a new rulemaking would result in a weakening, rather than strengthening, of measures to hold bad schools accountable.

It sends the wrong message. It tells the scam artists, from the strip mall to Wall Street, that they’re back in business. It tells America you are standing with predatory companies and against hard-working people seeking better lives.

Given the overwhelming need for these rules as a partial remedy for documented for-profit college abuses and the urgent need to protect students and taxpayers now, delaying the rules, or weakening them, would be viewed as arbitrary and capricious and thus unlawful.

And given the multiple financial connections between the for-profit college industry and President Trump[36], Secretary DeVos[37], her senior counsel Robert Eitel[38], and others in the Trump Administration, and the extensive financial donations the industry has made to the Republican Party and Republican politicians[39], there would be a strong perception that a delay or weakening of these rules was not only arbitrary and capricious but also driven by improper, corrupt motives.

Cancel this rulemaking process. Focus instead on enforcing these common sense rules to protect students and taxpayers.

[1] I am a self-employed attorney, policy advocate, and consultant. In addition to working with a coalition of organizations addressing higher education policy issues (see http://www.protectstudentsandtaxpayers.org/) I write about these issues, including at https://www.republicreport.org/ and http://www.huffingtonpost.com/author/davidhalperin, and I have published two ebooks on the subject: https://www.amazon.com/Stealing-Americas-Future-Profit-Taxpayers-ebook/dp/B00JAJGIIK and https://www.amazon.com/Friends-High-Places-Endorses-Profit-ebook/dp/B01HYNJCFE .

Support for my work on these issues has included grants from the Ford Foundation, The Institute for College Access & Success, and The Initiative to Protect Student Veterans at the University of San Diego.

[34] See the lawsuits filed on July 6, 2017, by the attorneys general of 18 states and the District of Columbia, and by two former New England Institute of Art students, all alleging that the Secretary’s delay of the borrower defense rule, issued without completing a new rulemaking, violates the Administrative Procedure Act. https://www.insidehighered.com/sites/default/server_files/files/Filed%20Complaint%20Massachusetts%20et%20al%20v_%20DeVos.pdf ; https://www.citizen.org/system/files/case_documents/complaint-devos-public-citizen_0.pdf . See also Clean Air Council v. Pruitt, No. 17-1145, slip op., (D.C. Circuit 07-03-17) https://www.cadc.uscourts.gov/internet/opinions.nsf/a86b20d79beb893e85258152005ca1b2/$file/17-1145-1682465.pdf (rejecting as arbitrary and capricious the Environmental Protection Agency’s decision to delay methane rule pending renewed rulemaking — “EPA’s stay, in other words, is essentially an order delaying the rule’s effective date, and this court has held that such orders are tantamount to amending or revoking a rule.”)