posted at 4:33 pm by David Halperin 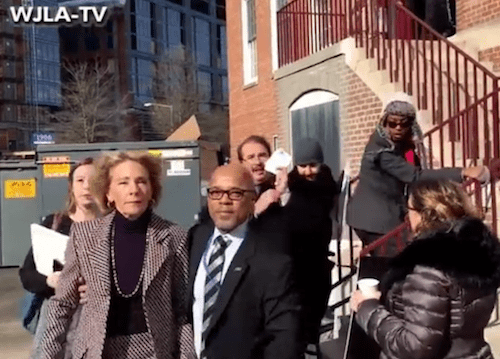 On her second day on the job as U.S. Secretary of Education, Betsy DeVos faced a protest as she visited a District of Columbia middle school. She also was sued by a group of cosmetology schools in a District of Columbia federal court. DeVos quickly fled the protest in an SUV. How she will react to the lawsuit is uncertain, but critical to Americans who want to pursue career training to improve their lives.

There is controversy over the protest, with some of the people who vehemently opposed DeVos’s nomination criticizing the people who put their bodies in front of her at Jefferson Middle School Academy in southwest DC.

I don’t know exactly what happened. I oppose violence and hyper-aggressive tactics. And I do think Betsy DeVos should meet with teachers and students, especially given that she has never run, taught in, or been a student or a parent in a public school system.

But I also think people should continue to protest and say that it is not OK that DeVos agreed to stand for the job, and was appointed, when she lacks the requisite skills and experience, does not adequately support public education, and refused to provide reasonable assurances or even disclosures regarding the numerous conflicts of interest raised by her extensive investments.

Devos simply felt she was entitled to the job, Trump barely knew or cared who she is besides being a GOP donor, and the GOP Senators, many of whom had received campaign contributions to her in the past, pushed her through. DeVos was confirmed even though every Democratic senator, and two conscientious Republicans, voted against her. (It required Senator Jeff Sessions, on the verge of becoming Trump’s attorney general, to hang around and vote instead of recusing himself.) DeVos’s appointment is a disgrace, and citizens should not forget.

One group, however, appeared eager to greet Secretary DeVos: the American Association of Cosmetology Schools (AACS), which today sued the new Secretary, claiming her “gainful employment” rule is unlawful. But, of course, gainful employment is not DeVos’s rule.  It’s a regulation that took the Obama Administration eight years to craft and implement, in the face of waves of lobbying and court challenges by the wealthy for-profit college industry.

Essentially, the rule says that if career education programs — courses in fields like computer networking, diesel mechanics, medical assisting, and cosmetology — year after year leave even their graduates with earnings insufficient to pay down their student loans, those programs will lose eligibility for federal grants and loans.  And that would be very bad news for many for-profit colleges, a good number of which get close to 90 percent of their revenue from those federal taxpayer dollars. Worse, when the first results from the gainful employment test emerged last month, 98 percent of the flunking programs came from for-profit schools, where a toxic mix of high prices, poor quality, and weak job placement leave even many graduates who are hired in their chosen field (not to speak of the many dropouts and those left unemployed), worse off than when they started.

But despite the high-priced legal talent hired (with our tax dollars) by for-profit colleges to fight the gainful employment rule, the final 2014 version of the rule was upheld by five different federal judges. In the decisive opinion in the U.S. Court of Appeals for the District of Columbia, a three-judge panel unanimously concluded, “It would be a perverse system that, by design, wasted taxpayer money in order to impose crippling, credit-destroying debt on lower-income students and graduates.”

But now that DeVos is in charge, the American Association of Cosmetology Schools (AACS) has filed a complaint in the same courthouse to relitigate the matter.

AACS may be cheered that this new lawsuit has been assigned to Judge Rudolph Contreras, an Obama appointee who struck down the first version of the gainful employment rule in 2012. But Contreras upheld most aspects of that rule, and the part to which he objected, on the ground that the Department had not provided a sufficient rationale, was removed from the 2014 version of the rule. That result, and the industry’s subsequent loss in court, turned the their legal onslaught into a major miscalculation — stripped of the offending provision, which actually provided programs a safe harbor from misconduct, the new rule was slightly more demanding.

In addition, the somewhat risque argument the cosmetology schools are now making — that hair and beauty school grads’ incomes are understated because some don’t report all their earnings to the IRS — was considered and rejected by one of the federal courts considering the regulation.

The gainful employment rule, in fact, allows schools to submit to the Education Department alternative data if they believe the standard earnings measure, using Social Security Administration information, doesn’t do justice to what their graduates actually earn.

But if the cosmetology schools do not find a friend in Judge Contreras, perhaps they are hoping their lawsuit will make them a new friend in Betsy DeVos.

DeVos in her confirmation process cast strong doubt on the whether she would support the gainful employment rule, telling Senator Elizabeth Warren (D-MA), “The last thing any of us want is to unnecessarily close down important programs — putting students on the street with limited or no other options.” This was the very argument that for-profit colleges made in vociferously attacking the rule in the Obama years, sidestepping the question: What programs would be shut down? By design, the rule only penalizes programs that are performing poorly. Warren told DeVos at her hearing, “Swindlers and crooks are out there doing backflips when they hear an answer like this.” And, indeed, many of the programs that flunked gainful employment also have been under federal and state law enforcement investigation for deceptive recruiting and other fraud.

With DeVos saying negative things about the gainful employment rule, and with GOP Members of Congress, awash in campaign funding from for-profit colleges, salivating to cancel the rule, there is a concern that the Trump Justice and Education departments will decline to defend it robustly in court.

Similar concerns underscore the importance of the effort this month by the attorneys general of Illinois, Maine, Maryland, Massachusetts, New York, and the District of Columbia to intervene in a federal lawsuit where the accrediting organization ACICS seeks to overturn a decision by the Obama Education Department to de-recognize that body because of its lax oversight of for-profit colleges.  At a hearing last week, representatives of those AGs argued persuasively that they should be permitted to join the case to protect the interests of their students. Judge Reggie Walton tentatively decided that the AGs deserve a seat at the table in the dispute, pending further litigation of the issue.

Depending on the next signals from DeVos, the AGs might be well-advised to enter the new gainful employment lawsuit as well.

There are good cosmetology schools that deserve the Department of Education’s support, so that they can help students train for good jobs.  But some of these schools simply charge too high a tuition cost, making it impossible for low-earning graduates to pay back their loans, and turning their dream careers into nightmares.

The whole point of the gainful employment rule is to push schools to make their programs a good deal for students. Some schools have made clear they can adapt to the rule. The repeated efforts by some for-profit colleges to erase the rule, rather than try to live with it, suggests they are committed only to profits, rather than to their students.