posted at 1:26 pm by David Halperin 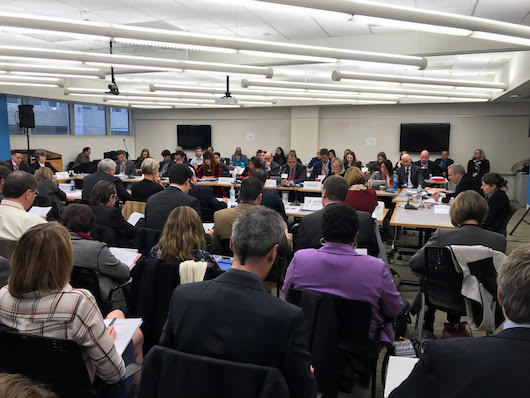 Last month the Department of Education’s first meeting on rewriting the Obama “borrower defense” rule for student loans stalled for nearly the whole day over opposition by for-profit colleges and Department representatives to the organization Generation Progress / Higher Ed Not Debt and others live-streaming the meeting. Today, when the Department convened a parallel set of meetings to reshape the Obama “gainful employment” rule, aimed at weeding out career education programs that leave graduates with insurmountable debt, for-profit college negotiators again pressed the Department to halt Generation Progress and its executive director, Maggie Thompson, from live-streaming.

In response, advocates for students, public colleges, and state attorneys general pushed back, arguing that there was no basis for barring a live recording of the public meeting. In the end — see below — the Department backed down, announcing it would not stop the live-stream.

I will describe the back and forth arguments about why live-streaming should or should not be allowed, but the real question is why advocates for for-profit colleges, and the DeVos Department of Education, are so determined to limit public scrutiny of this meeting, while advocates for students want the public to see as much as possible. Kathleen Smith of the Department opened today’s meeting by declaring that the Obama rules are insufficiently clear and “overly burdensome” for some schools. If DeVos and the for-profit schools are so sure it’s just and correct to get rid of these rules aimed at protecting students and taxpayers from predatory college abuses, why not be proud of it, own it, shout it from the rooftops?

Nor has the Department ever purported to order or notify the public that live-streaming was banned generally from negotiated rule-making meetings. Given our nation’s First Amendment commitment to free speech, the presumption must be that a public meeting may be recorded by the public — written, audio, video.

Neal Heller, owner of the Hollywood Institute of Beauty Careers, said he could not understand how any member of the public could be live-streaming the meeting “without permission.” He expressed concern that a live-stream would produce unfair “splicing and dicing” of the proceedings, and he argued that a better approach would be a professional recording done by the Department. But a live-stream is in fact the purest form of an unfiltered presentation of the meeting, and even an official recording could be spliced and diced after the fact.

Other for-profit college negotiators expressed concern that live-streaming would produce unwanted public commentary on the meeting. Sandy Sarge worried about nasty commentary and “negativity” by “trolls …in the dark web.” Sarge worked for five years at Alta/Westwood, one of the most egregious predatory schools. You don’t need a live-stream to know that. Jeff Arthur of for-profit ECPI worried that commentary on social media stemming from the live-stream could make some negotiators “uncomfortable.” But the fact that the public might comment on a government proceeding should strengthen, not weaken, the case for transmitting it.

Jennifer Blum of for-profit Laureate Education, a negotiator representing college lawyers, said she opposed live-streaming because there was no notice and because “this is not a public hearing, it’s a negotiation.” She worried about a “chilling effect” on the negotiators.

Blum then stated that she had just learned that the event was still being live-streaming as the negotiators debated, leading the meeting facilitator engaged by the Department to order that the live-stream be shut down immediately. Thompson defended her right to keep her camera on.  The facilitator then shut down the meeting for consultations.

The negotiators eventually resumed and debated a proposal that live-streaming go forward, but that if negotiator behavior or public commentary got out of hand, it could revisit the issue.

Laureate lawyer Blum insisted that blocking a live-stream was appropriate because the meeting was not governed by the Federal Advisory Committee Act. She also argued that panel negotiators should not tweet or retweet.

Eventually Blum expressed a willingness to accept live-streaming contingent on good behavior by people in the room. Daniel Elkins, from the Enlisted Association of the National Guard, representing veterans, took the opportunity to agree.

While the meeting facilitator seemed to imply that the negotiators would have to vote unanimously to allow live-streaming, Chris Madaio of the Maryland attorney general’s office argued that instead a unanimous vote should be required if the meeting was going to ban live-streaming. Madaio argued that the rule was being written for the public, and that many in the public want to know what’s happening.

Consumer negotiator Whitney Barkley noted that the Department had said it would strive to release audio recordings from the borrower defense meeting within two weeks, and more than two weeks had now passed, with no recording available.

There are arguments that recording or transmission of meetings can inhibit open and respectful discussion. Many courts still ban cameras, supposedly to prevent the kind of “grandstanding” that some for-profit college negotiators worried about this morning. But that concern must be weighed against the public interest in observing the proceedings, and the the interest of speakers in the room to convey what they observe. Billions of federal tax dollars are at stake, as our the futures of millions of Americans who seek to build better lives through career education.

Today’s meeting deferred consideration of the issue for a while, moving on to other things.  At last vote, opposition among negotiators to allowing the public to live-stream had whittled down to three members. For now, live-streaming is still going on.

(Disclosure: I founded and from 2004-2012 ran Campus Progress, the unit of the Center for American Progress that is now called Generation Progress — i.e. the people live-streaming.)