posted at 7:38 am by David Halperin 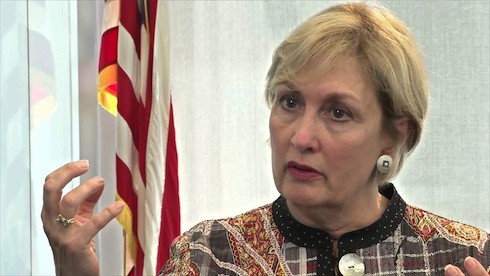 Donald Trump’s pledge to drain the swamp in Washington has already turned out to be a cruel hoax on the working class voters who believed it, as his transition quickly leaned on insider lobbyists and his administration is filling with the corporate elites and Goldman Sachs bankers he attacked during the campaign. But you might think that at least Democratic Party-affiliated lobbyists would suffer some in a city where lobby firms even color-code their rosters, red for Republicans and blue for Democrats, because lobbying is often based on revolving door partisan appeals, and the Democrats are completely out of power.

But homo lobbius is a resilient species, and top Democratic lobbyists are pursuing their survival strategies.

For example, Democratic mega-lobbyist Tony Podesta (disclosure: my wonderful landlord in the early nineties) is publicly fawning over the Trump family, informing the Boston Globe that daughter Ivanka Trump “is a great businesswoman. She is a really interesting person…” and telling the New York Times that “[i]t will be great” to have Ivanka’s family living in his Kalorama neighborhood.

But long-time Democratic power lawyer-lobbyist Jamie Gorelick has gone a step further: It emerged over the weekend that she has been hired to represent Ivanka’s husband, Jared Kushner, as he addresses the legal ethics issues related to him joining Donald Trump’s administration. Kushner, a real estate executive with no government experience, has just been named to serve in the White House job as senior adviser to Trump. Kushner, according to the Times, “has been described by numerous transition staff members as the first among equals in Mr. Trump’s high command.”

Some experts on legal ethics and Democrats in Congress have argued that Trump appointing Kushner might violate a federal law barring the hiring of family members, including sons-in-law, for federal  jobs, a law enacted after President John F. Kennedy installed his brother Robert as attorney general. Gorelick has been making the rounds, speaking on a Trump transition conference call with reporters,  insisting that the White House is not a federal agency within the coverage of this anti-nepotism law and explaining how Kushner will divest and restructure assets to avoid conflicts of interest.

Gorelick, a partner at the law firm Wilmer Hale, would seem an odd choice to directly serve the family of Donald Trump. After all, Trump is the man who told Hillary Clinton during a debate last fall that if he were elected, “you’d be in jail.” And Gorelick, she has long been on the Clinton team, at least we thought.

Gorelick served in Bill Clinton’s administration as deputy attorney general, the number two official at the Justice Department, and she was mentioned as a candidate to be Hillary Clinton’s attorney general. Gorelick has donated more than $171,200 to federal candidates or committees since 1997, mostly to Democrats, with $11,000 of those contributions going to Hillary Clinton’s Senate and presidential campaigns.

In 2015, Gorelick represented the Clinton Foundation, on whose board of directors Hillary Clinton served from 2013 to 2015, in its successful defense against a lawsuit brought by conservative activist Larry Klayman. Gorelick also led efforts to criticize FBI Director James Comey’s “October surprise” letter to Congress regarding newly-discovered emails on a computer linked to one of Hillary Clinton’s aides.

But to those who have followed Gorelick’s career over the years, her assisting the Trumps in pushing the ethical envelope is no surprise. She is a symbol of revolving door Washington, where well-educated, highly-capable people trade on government experience and connections to help special interests get their way over everyone else.

After leaving the Clinton administration, Gorelick served as vice chair of Fannie Mae, the giant mortgage lender, from 1998 to 2003, and received some $25.6 million in compensation, including bonuses. In 2006, DC-based Fannie Mae was fined $400 million for accounting manipulation tied to executives’ bonuses that occurred from 1998 to 2004; Gorelick was not charged with any wrongdoing. Fannie Mae’s increasingly risky business strategy in the 2000s eventually required a huge taxpayer bailout.

At WilmerHale, Gorelick has represented a wide range of major corporate clients. Federal disclosure forms show she has lobbied for Google, JPMorgan Chase, Lazard Freres and others. She represented BP, pressing to limit government efforts to hold the energy giant responsible for the massive Gulf of Mexico oil spill.

Gorelick also lobbied from 2009 to 2010 on behalf of student loan giant Sallie Mae as part of an intense effort by that company and big banks to block the Obama administration’s effort to reform the student loan system by eliminating nonsensical, wasteful loan subsidies to private lenders. The Obama administration ultimately prevailed over Gorelick and the other special interest lobbyists, and the reform has saved billions for students and taxpayers.

Later, Gorelick represented another special interest—one caught engaging in abuses against military service members. In 2016, Gorelick successfully pressed the Pentagon on behalf of the country’s biggest for-profit college, the University of Phoenix, to lift a suspension barring the school from recruiting on military bases — despite the school having been caught red-handed engaging in recruiting violations, and despite its dismal record serving troops and other students.  The University of Phoenix has been getting as much as $3.8 billion annually from taxpayers, but its toxic mix of high prices and low spending on instruction has left many students with overwhelming debt. In recent years, the University of Phoenix has been under investigation for fraud and other misconduct by the US Department of Education, Department of Defense, Federal Trade Commission, Consumer Financial Protection Bureau, Securities and Exchange Commission and attorneys general of California, Delaware, Florida and Massachusetts.

And now, Trump. Elite Washingtonians will argue that Gorelick is simply providing wise legal counsel to the Trump family, helping to ensure that they comply with the law. But in addition to the fact that her arguments aggressively press against at least the spirit, if not the letter, of the ethics laws, there is the question of whether Gorelick should be lending her skills and Democratic credentials to the Trump cause. Because for many people, Democrats, Republicans, and independents, this is not a normal presidency.

In case you missed it, Trump has a disturbing record of bigotry, misogyny and sexual abuse, dishonesty, predatory business practices, association with organized crime figures, and misuse of charitable entities. He also has advocated for torture, bombing civilians, and other reckless acts that no conscientious military officer could carry out. Since the November election, he has appointed to top administration jobs people with disturbing records of bigotry. While tweeting complaints about the media, “Saturday Night Live,” Meryl Streep, and the cast of “Hamilton,” he has failed to assertively disavow hateful acts perpetrated by his supporters. He has brushed off the pointed conclusions of U.S. intelligence agencies that the Russian government engaged in extensive operations to influence the outcome of the U.S. election in his favor. And he has assumed a passive-aggressive stance regarding his obligations under the law to separate his government power from his private interests, repeatedly discussing his overseas investments in calls with foreign leaders, and always insisting that while he will announce plans to behave ethically, he has no obligation to do so.

Trump promised to put Hillary Clinton in jail. And now Hillary Clinton’s lawyer, Bill Clinton’s deputy attorney general, is getting paid to vouch for the the Trump family’s ethics and help them assume full powers in the White House.

Anything is possible in Washington. If you have enough money to buy people.