Coal Baron, Convicted After 29 Miners Died, Claims It’s Senator Who Has “Blood on His Hands”

posted at 4:57 pm by David Halperin 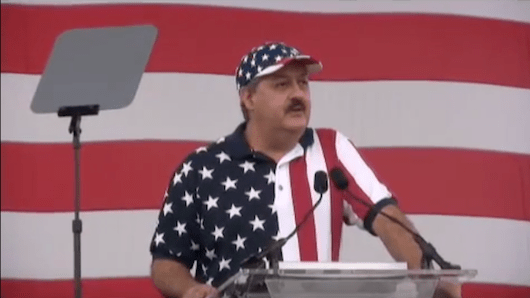 Donald Blankenship, the former Massey Energy CEO who served a year in prison on a federal conspiracy charge, has released the latest in a series of aggressive video advertisements, this one seeking to tie Senator Joe Manchin (D-WV) to both the deaths of four Americans in Benghazi, Libya, and the 2010 deaths of 29 coal miners at Massey’s Upper Big Branch mine. The 30-second ad asks viewers, “Does Manchin have blood on his hands?”

But it was Blankenship who was convicted by a West Virginia federal jury in December 2015 after the 29 workers died at his company’s mine. The jury, following a lengthy trial, rejected three felony charges but convicted Blankenship of conspiracy to violate mine safety standards, a misdemeanor. The federal charges against Blankenship did not accuse him of direct responsibility for the miners’ deaths, which occurred after poor ventilation caused caused a build-up of gases and subsequent explosion. But prosecutors alleged that Blankenship’s profit-focused management decisions helped produce the tragedy.

Audio recordings presented at Blankenship’s trial captured the Massey CEO berating his lieutenants and pushing for production figures. The jury also learned that the company had been cited for thousands of safety violations.

Then-Secretary of Labor Hilda Solis concluded in 2011 after a federal Mine Safety and Health Administration investigation  that “Massey promoted and enforced a workplace culture that valued production over safety, and broke the law as they endangered the lives of their miners.”

Yet Blankenship’s new ad appears to blame Manchin, and former president Obama, for the miners’ deaths, charging that “the U.S. government reduced their mine’s airflow,” and demanding, “President Trump must be told the truth about Obama’s deadliest coverup.”

Blankenship received $18 million in compensation from Massey in the last full year before the mine explosion. The verdict against him was a landmark, given the historic power of the coal industry in West Virginia, and given the millions spent on his legal defense.

Ever since Blankenship was released from prison in May, he has aggressively attacked Manchin, using Twitter, TV news outlets, and his own website. He also has proclaimed his innocence, with tweets such as, “I went to prison for a crime that I did not commit due to prosecutor misbehavior.” His latest charge about blood on Manchin’s hands echoes what Manchin told ABC News in 2014 about the Upper Big Branch catastrophe: “I believe this permeated from the top down – from Don Blankenship down…. I believe that Don has blood on his hands. And I believe that justice will be done.”

Blankenship said in July that running against Manchin for his Senate seat was “a possibility.”