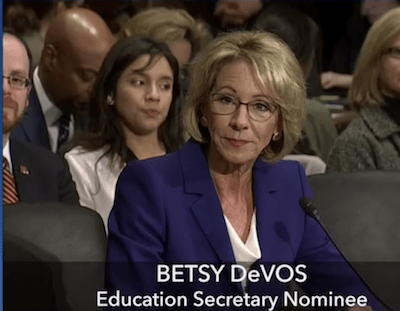 It might just be career government lawyers doing their jobs, and doing them well, until the Trump Administration can catch up and work its malevolence, but in court papers filed today, the Trump Justice Department defended the Obama Administration’s gainful employment rule, a measure aimed at curbing predatory abuses by for-profit colleges.

The rule penalizes expensive career college programs that, year after year, leave graduates with debts that, based on their earnings, they cannot afford to repay.

“The public interest is served by allowing the Department to go forward with implementing the GE regulations,” Justice Department lawyers wrote on behalf of their client, Secretary of Education Betsy DeVos, who is being sued by an association of cosmetology schools.  The association’s somewhat risque argument is that many hairdressers and other beauty professionals do not report all their tip income to the IRS, and thus their graduates actually are doing better than the gainful employment calculations give them credit for.

Revised under pressure from industry lobbyists, the Obama Administration’s rule is not very strong, but it does endanger some of the worst-of-the-worst college programs. The operators of those programs, who have been raking in billions in taxpayer money, want to make sure they can still act with impunity, even though their abuses have ruined the lives of countless veterans, single moms, and other students.

There are good cosmetology schools, as well as other types of career schools. The gainful employment rule aims to channel resources and students to those quality, affordable schools, and away from the kind of for-profit colleges that law enforcement agencies are investigating or prosecuting for fraud.

But given: that Donald Trump was previously the proprietor of his own predatory for-profit real estate “university”; that Trump crony Newt Gingrich and congressional Republicans have aggressively advocated for the for-profit college industry; that DeVos has been invested in for-profit education businesses and has cast doubt on the rule; that the Department under DeVos recently delayed implementation of the rule for several months; and that DeVos has hired former for-profit college lobbyists and executives for her staff, there has been serious concern that the Trump Administration will trash the rule.

The cosmetology school association held a briefing for congressional staff just yesterday, where they demanded not only that the gainful employment rule be eliminated or gutted, but also that the Department drop a range of other protections for students, including the right to take predatory colleges to court, strong loan relief provisions for defrauded students, and effective curbs on paying sales commissions to college recruiters.

But today, government litigators argued like it’s 2016.  They told Judge Rudolph Contreras in court papers that the cosmetology schools were essentially making the same facial challenge to the rule that previous judges rejected; they said the case was not, as the cosmetology schools claimed, a ripe “as-applied” challenge because the Department of Education had not formally penalized anyone yet. The Department today also rejected the schools’ argument that the rule is arbitrary, saying that that argument, too, was already decided by prior courts.

The Justice Department lawyers described the rule, as the Obama administration did, as helping students and safeguarding the taxpayer investment:

The regulations are intended to protect students and taxpayers by providing warnings about programs with relatively high loan debt compared to the earnings their students could hope to achieve after graduating from those programs. Plaintiff fails to support the notion that there is a public interest in withholding information about a cosmetology program’s failing D/E [debt to earning] rates and about the potential that the program may become ineligible for Title IV funding next year, or for protecting schools’ ability to attract students who obtain Title IV loans if students ultimately will not earn enough money to repay those loans. To the contrary, those students and prospective students may benefit from D/E rate information because it could prevent them from taking on debt that they will not be able to repay, and they could more reasonably evaluate whether they would prefer to enroll in programs that have been more successful in enabling their students to find employment that would allow them to repay their loans. Taxpayers will also benefit to the extent this information prevents students from defaulting on Title IV loans.

As I said, all of this could be reversed once more Trump people are staffing Justice and Education, as could Trump Justice’s diligent defense of the Obama decision to drop asleep-at-the-switch for-profit college accreditor ACICS. But for now, the Administration has publicly slapped down the greedy for-profit college industry’s latest effort to gut this key accountability measure.
This article also appears on Huffington Post.