Want Fake News? Trump Statement on the Wave of Attacks in his Name 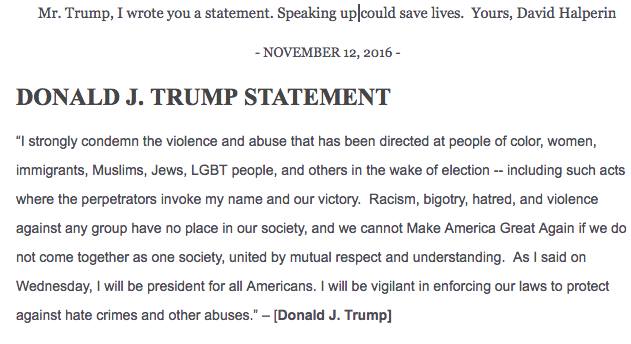 Since Tuesday’s election, there have been reports across the country of Donald Trump supporters carrying out vicious attacks against people of color, women, immigrants, and others in “celebration” of Trump’s apparent victory. But at this point, Trump, while complaining about anti-Trump protests as “very unfair,” has said nothing at all about the violence and abuse in his name.

I drew on my ancient speechwriting training and took three minutes yesterday to offer Trump a draft statement for him to release condemning the violence. It would take him less than three minutes to issue it, and it could make a big difference in getting his supporters to stop their violent and hostile acts.

I’m sure my message could be used and misused in all kinds of ways. But if you like it, I would be grateful if you shared:

Generation Progress (the organization I founded and ran for eight years) has posted a petition calling on Trump to speak up — join it.