posted at 2:00 pm by David Halperin 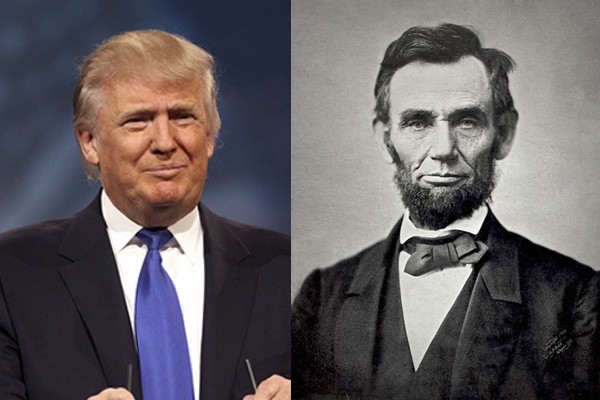 Donald Trump spoke today at Gettysburg, Pennsylvania, and offered a new “contract between Donald J. Trump and the American voter,” which is pretty funny given that Trump has failed to honor hundreds of contracts.  So I’m not sure we should sign it.  But we need to hear him out.

I tried to transcribe Trump’s remarks as he spoke, but I don’t type too fast, so I used Abraham Lincoln’s Gettysburg address as my template and adjusted as necessary. Not sure I got it all right, but here (with thanks for inspiration to Rien Forme) goes:

Four score and eleven nasty, lying women ago, my father brought forth in Queens a new corporation, conceived in debt, and dedicated to the proposition that all men are not created equal, believe me. But a lot of people were doing that, as far as apartments, and we settled the case with zero admission of guilt.  Zero.

Now we are engaged in a tremendous civil war — and I love war, and I know more about war than the generals, believe me — testing whether our nation, or any nation, can have a rigged election with the corrupt media and a candidate who never should have been allowed to run and dead people voting and still endure, or have the stamina to endure, and as for me there’s absolutely no problem, believe me.

We are met on a great battlefield of that war – Pennsylvania, which has great, wonderful people. We have come to dedicate a portion of that field, or at least to look at it as a place for possibly a tremendous golf course and later a series of lawsuits when I refuse to pay a lot of contractors who, maybe, did a horrible job. Really, a total disaster.

The world will little note, nor long remember, what we say here, but it can never forget Celebrity Apprentice, which got tremendous ratings — the number one show — and should have won the Emmy if the system wasn’t rigged, believe me.

So I’m gonna keep going, especially because of the tremendous crowds we’re getting, that the media refuses to show — and despite the refusal of loser Paul Ryan to support my campaign. Or sometimes Mike Pence.  Or the lying women who will be sued after the election, just as Honest Abe would have sued them. And won.

And, folks, I’m gonna have a new birth of freedom, and I think it’s terrible if in the ninth month you can take freedom and rip it out just prior to the birth of freedom. And that’s not acceptable. Believe me.