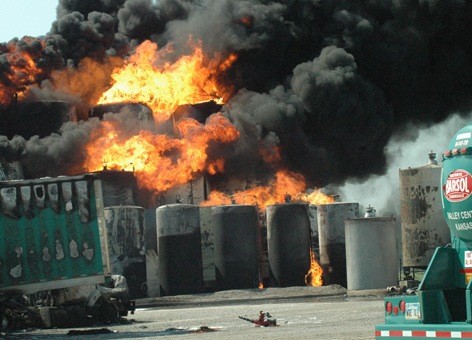 Tomorrow I’m scheduled to speak at an EPA public hearing addressing a new rule that the agency has proposed regarding dangers from America’s chemical plants. I will draw my remarks from a formal comment submitted today by: retired Army Lieutenant General Russel Honoré, former commander of Joint Task Force Katrina; retired Army Major General Randy Manner, former acting director of the Defense Threat Reduction Agency; and me. (I’m a former staff member of the National Security Council and the Senate Intelligence Committee, and an advisor to Greenpeace on these issues.)  Our written comment is below. Here’s what it’s about:

In 2006, Senator Barack Obama said that America’s hazardous chemical facilities “are stationary weapons of mass destruction spread all across the country.” In that light, the proposed EPA rule evokes a notorious Cold War prescription for nuclear attack: Duck and cover.

Emergency preparedness, the EPA rule’s focus, is critical. But even more essential is prevention of a chemical disaster in the first place. And in this regard, the proposed rule falls well short.

Such a chemical disaster could be caused by accident, by natural disaster, or by terrorists.

This is a national security issue. The Administration must treat it like one, with the kind of urgency we give to weapons of mass destruction overseas.

I don’t see how President Obama, who offered such a clear perspective on this danger, would want to read that his EPA’s final rule was exposed as far too weak by groups representing communities living near these hazardous plants, by unions representing chemical plant workers, by national security experts like General Manner and General Honore, and others.

There surely would be scrutiny of a weak EPA rule if one day we did have a major chemical catastrophe. The pesticide plant in Bhopal India, which killed 20,000 people following a 1984 accident, was owned by a U.S. company, Union Carbide. If that plant had been located in the U.S. and 20,000 people had died here, we would have fixed this problem long ago. We must not wait for such a tragedy.

General Honore and General Manner, along with our coalition of environmental justice, environment, and labor groups, are calling on the EPA to require chemical plants to move to inherently safer technologies (IST) where feasible. Safer cost-effective chemical processes are widely available; since 2001, hundreds of chemical facilities have switched.  We must overcome the resistance of intransigent chemical companies like Koch Industries and their Washington lobbyists, and make this happen.

In 2006, U.S. Senator Barack Obama offered the clearest statement of the dangers posed by America’s hazardous chemical facilities. “Basically,” he said, “these plants are stationary weapons of mass destruction spread all across the country.”[1] In that light, the instant rule, proposed a decade later by the EPA under President Barack Obama, evokes a notorious Cold War prescription for a nuclear attack: Duck and Cover.[2]

Emergency preparedness in the event of a chemical plant disaster, the proposed rule’s focus, is indeed critically important for our national security. But even more essential in this context is prevention of a chemical disaster in the first place. And in this regard, the proposed rule falls well short of what is required to protect Americans from catastrophic harm.

As former holders of U.S. national security positions, we believe the EPA should require the use of safer alternatives for all hazardous facilities where they are feasible, and we strongly urge the EPA to modify its final rule to achieve that outcome.

For decades, our country has failed to squarely address the security problem that unsecured chemical facilities present. It is a glaring danger that puts millions of our citizens at risk.

In August 2013, President Obama took an important first step with his Executive Order requiring a government review of safety and security procedures at chemical plants.[3]

The President initiated this process, in part, because of the April 2013 ammonium nitrate explosion in West, Texas, which killed 15 people and injured 160 more. This tragedy highlighted much of the chemical industry’s repeated failure to minimize and safely store toxic materials, and our government’s failure to create comprehensive and fair rules to protect against such incidents.

Since the West, Texas, disaster, there have been more than 430 chemical incidents and 82 deaths. None of us should ignore the possibility of more accidents, or chemical incidents resulting from natural disasters, with even more violent consequences. Many of us recall the 1984 pesticide plant disaster at Bhopal, India, which caused 20,000 deaths.

Terrorists could trigger a chemical plant attack in our country, with consequences like Bhopal, 9-11, or even worse. In 2003, the government’s National Infrastructure Protection Center warned that chemical plants in the United States could be terrorist targets.[4] Security experts have warned of the relative ease with which a determined team of attackers could thwart conventional plant security. The potential for cyber attacks makes the challenge even more serious.

The EPA has identified 466 chemical facilities in the U.S. that each put 100,000 or more people at risk of a poison gas disaster.[5] In 2005, the Homeland Security Council projected that a major attack would set off a deadly gas cloud that would kill some 17,500 people and injure tens of thousands more.[6]

This is a national security issue, and the Administration must treat it like one, with the kind of urgency we give to weapons of mass destruction overseas.

If our citizens are to be protected, the new rule must mandate the use of safer chemicals, substances, and processes. The EPA has the authority to issue rules to require chemical plants to move to inherently safer technologies (IST) — which would make them less attractive to terrorists while protecting workers and families living near these facilities. Former EPA administrators Christine Todd Whitman and Lisa Jackson have each called for the EPA to move ahead with such an approach.[7]

This approach is also consistent with the principles the Obama Administration developed for chemical security legislation (CFATS) in 2009 and which were contained in a November 2009 House-passed bill (H.R. 2868). They also were reiterated in 2011 congressional testimony by Rand Beers, then the Under Secretary, National Protection and Programs Directorate, Department of Homeland Security.[8]

Safer cost-effective chemical processes are widely available. Since 2001, hundreds of chemical facilities have switched to safer processes.[9] Clorox Company, for example, has converted all of its U.S. facilities. Based on the many facilities that have converted, the result is reliable protection for employees and communities against catastrophic disasters at minimal cost. Wherever this can be done it should be a requirement.

The proposed rule takes an important first step by mandating that certain high-risk chemical plants conduct a safer technology and alternatives analysis (STAA) and feasibility assessment on the use of inherently safer technologies.

But the proposed rule needs to be dramatically improved in the area of prevention. A final rule should:

We understand that the technical and organizational challenges of requiring companies to move to safer technologies are complex. But it can, and must, be done. Given the magnitude of chemical facility hazards posed by potential accidents, natural disasters, and terrorist attacks, you should not wait any longer to protect the American people.

[2] “Duck and Cover” is a 1951 film produced by the American Federal Civil Defense Administration. https://www.youtube.com/watch?v=gqCxcnhNAeQ

The Administration supports, where possible, using safer technology, to enhance the security of the nation’s high-risk chemical facilities. Similarly, we recognize that risk management requires balancing threat, vulnerabilities, and consequences with the costs and benefits of mitigating risk. In this context, the Administration has established the following policy principles in regard to inherently safer technologies (IST) at high-risk chemical facilities: