posted at 2:22 pm by David Halperin 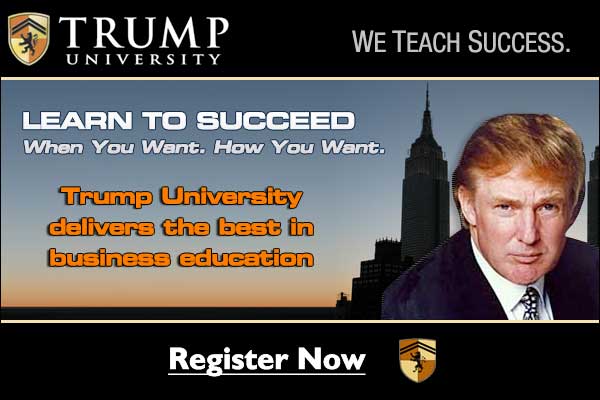 In August and September 2010, SED once again informed TEI that the company needed a license to operate, which it still did not have despite having been notified in 2005 that its failure to obtain a license violated New York State law. On October 7, 2010, Sexton informed SED that TEI had ceased operations.

… In its supporting affirmation, the Attorney General alleged that between 2005 and 2011, respondents operated an unlicensed, illegal educational institution. Further, the Attorney General stated, through various fraudulent practices, respondents intentionally misled more than 5,000 students nationwide, including over 600 New York residents, into paying as much as $35,000 each to participate in live seminars and mentor programs that the students thought were part of a licensed university.

According to the Attorney General’s affirmation, respondents represented in advertising that real estate experts handpicked by Trump himself would teach his strategies and techniques for real estate investing, and that these strategies would lead to success. One advertisement offered a free workshop and referred to “Donald Trump’s handpicked experts.” The same advertisement bore a quotation attributed to Trump, stating, “I can turn anyone into a successful real estate investor, including you.” Similarly, a direct mail solicitation sent to prospective students read, “In just 90 minutes, my hand-picked instructors will share my techniques, which took my entire career to develop” and went on to state, “Then just copy exactly what I’ve done and get rich.” The Attorney General noted that at the free seminars, instructors played a video featuring Donald Trump telling prospective students, “We’re going to have professors that are absolutely terrific — terrific people, terrific brains, successful, the best” and noted that they were “all people that are handpicked by me.”

However, the Attorney General averred, Trump did not handpick the instructors; indeed, only one of the live event speakers for Trump University had even ever met Donald Trump. Nonetheless, some students purchased seminars on the basis of their belief that Trump had approved each instructor. In an affidavit submitted to the Attorney General, one student stated that he “had some trust in the program because it was run by Donald Trump” and was “led to believe that…based on Trump’s marketing materials, the course professors had been handpicked by Donald Trump.” Similarly, the Attorney General stated, Donald Trump never participated in the creation of any instructional content and never reviewed any curricula. The Attorney General further maintained that the instructors had been inadequately vetted and in fact had little or no experience in real estate investing, instead having prior work experience such as food service management and graphic design.

What is more, according to the Attorney General, the free seminars were merely an instrument through which instructors would induce students to enroll in increasingly expensive seminars, starting with a three-day $1,495 seminar. The Attorney General averred that although Trump University speakers represented that the three-day seminar would teach students all they needed to know to be successful real estate investors, the instructors at those three-day seminars then engaged in a “bait and switch,” telling students that they needed to attend yet another seminar for an additional $5,000 in order to learn more about particular lenders. Instructors at the three-day seminars are also alleged to have engaged in a bait-and-switch by urging students to sign up for “Trump mentorship packages, which ranged anywhere from $10,000 to $35,000” and supposedly provided “the only way to succeed in real estate investment.”

The New York court rejected Trump’s claim that a three-year statute of limitations applied to the fraud charges in the case.  Trump’s lawyer told the New York Post that he disagreed with the opinion and planned a further appeal.