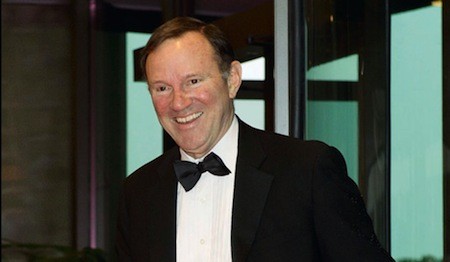 Donald Graham, who turned his family company from the fabled owners of the Washington Post newspaper into the purveyors of the predatory for-profit college Kaplan University, met twice late this month with senior White House officials. Graham’s aim, as documents he left behind and were posted by the Office of Management and Budget indicate: to derail the Department of Education’s plans for a new rule giving debt relief to students defrauded by their schools.

On May 25, according to OMB records, Graham, the head of his Kaplan division Andrew Rosen, and Kaplan lobbyist Rebecca Campoverde, met with some senior officials of the Department of Education, Office of Management and Budget, and White House Domestic Policy Council to discuss the debt relief regulations. Graham and his subordinates met with a somewhat larger and more senior group of officials than the Administration team that met later the same morning with a group of consumer advocates (including me) who favor a strong debt relief rule.

The powerpoint presentations that Graham left behind at those meetings warn of dire consequences from a Defense to Repayment (DTR) rule:

The DTR regulation was intended to create a process for handling student loan discharge petitions.  Instead, without proper review or debate, it has yielded an unprecedented new set of student rights that could:

The slides also suggest that Graham, in his meeting with Zients and Shelanski, was again trying to relitigate his six year fight against the Administration’s gainful employment rule, which would cut off federal student to programs that consistently leave students with overwhelming debt, and which the Education Department is on the verge of implementing.  The slides appear to argue that Kaplan graduates’ debt payments are reasonable compared to their wage gains.

Kaplan has been receiving as much as $1.5 billion annually in taxpayer-funded federal student aid.  But students across the country have complained that Kaplan has engaged in deceptive or coercive recruiting.  In recent years, Kaplan has been under investigation or sued by the U.S. Department of Justice, U.S. Department of Education, and the attorneys general of Delaware, Florida, Illinois, Massachusetts, and North Carolina.

The for-profit colleges’ trade association, APSCU, or now CEHE, made its own presentation to the White House on June 7.  It left behind a powerpoint, attributed to APSCU CEO Steve Gunderson. It’s the familiar APSCU line about an ideological conspiracy against for-profit schools, full of Gundersonian exclamation points, worrying about the survival of schools, as if they deserve perpetual life regardless of misconduct, and evincing little concern for the fact that many of its members have deceived and abused students:

The proposed triggers for “letters of credit” needs to ensure that such triggers don’t create new financial problems!

Gainful Employment Rates, law suits being filed, settlements (often to avoid further costs), 90/10 rates, Cohort Default rates, etc. should not be used to trigger letters of credit; or be accepted as evidence of misrepresentation!

Letters of Credit should NOT be determined by State Attorney Generals, or trial lawyers. Ideologically motivated lawsuits cannot become the basis for managing Title IV programs!

Only if a judge has ruled against a school, should such law suits serve as a trigger for lines of credit.

“Borrower Defense” should not defraud a student twice:

A. Students should opt in, not have to opt out of a group so they are not used against their knowledge and will.

B. Requiring Class Action suits prior to Arbitration will limit recourse to ONLY those students enrolled in large institutions. Students at small institutions will have no protections or access to remedies because no trial lawyers will focus their energies on small schools….

Protection from “Fraudulent Institutions” should not be used destroy good institutions:

Currently we have total loan balance of $1.2 Trillion

The APSCU presentation adds this analysis of the existing debt relief rules, “Most would say this regulation has worked well over the past 20 years.” Indeed. PoliticoPro notes this morning that, “The Education Department has previously said that it’s forgiven loans under the regulation in only five cases in the past two decades.”