posted at 5:40 pm by David Halperin 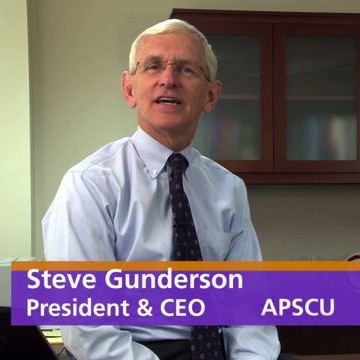 Steve Gunderson, the former congressman (R-WI), who heads the discredited, depleted for-profit college trade group CECU (formerly APSCU), is working hard to defeat a new Obama Administration rule that would (1) provide debt relief for students who were defrauded by their schools and (2) take steps to hold fraudulent schools accountable.  In addition to efforts to buy spokespersons and scare non-profit and public colleges into opposing the rule, CECU now aims to get for-profit colleges to enlist their students as lobbyists in the effort — a tack the industry has taken before.  Here’s Gunderson’s email today: 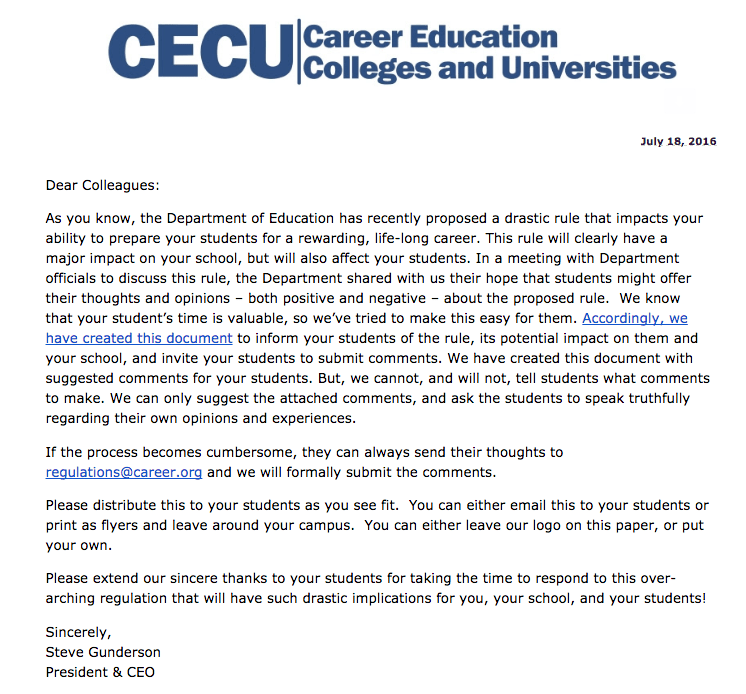 Unfortunately, the new CECU “toolkit” is, like the pitches often used to recruit students to for-profit colleges in the first place, full of distortions. Among the messages that Gunderson urges schools to tell their students are:

“Currently, many schools have enrollment agreements requiring that students resolve disputes through arbitration; and do so individually rather than as a class action suit against the school.”

“Now, [under the new regulation] students would be required to go through complicated legal proceedings or a bureaucratic process through the Department of Education.”

Fact: The “complicated legal process” is called having the right to bring a claim to court, a fundamental right in our system. Arbitrations are often no less complicated, but they do tend to keep disputes secret and thus wrongdoing concealed, and they do tend to favor companies over individuals, make it difficult to get a lawyer, and keep many claims from getting filed at all.

“The regulation eliminates mandatory arbitration clauses in enrollment agreements. Most times, these provisions were inserted into such agreements to provide opportunities for both students and schools to resolve disputes in the easiest way possible. On the one hand, such a process establishes a formal method to address any disputes. On the other hand, such a process eliminates the ability of the student and the school to work out any disputes in ways they think are easiest for both parties. One of the side effects of the proposed rule is that if you are enrolled at a small school, and arbitration is no longer an option, the likelihood that you will be able to achieve a remedy diminish if the only remedy is through filing complaints with the Department or in the courts. If this seems unusually complicated for you, then it is important to share your thoughts as to why all options for remediation should be available to students – especially those in small schools.

 The rules limit your ability to choose how you would want to settle a dispute, if you had one.

 You would be forced into a complicated legal claims process that may not suit your individual needs.

 You may be lumped into a larger group, where the government could use your information without your knowledge or approval.”

Fact: Nothing in the rule prohibits a student and a college from mutually agreeing to address a dispute in arbitration.  The rule would only prohibit colleges, in some circumstances, from forcing students to accept arbitration of any dispute as a condition of enrolling.

The “toolkit” also gives colleges advice about giving their students advice about what to say about the rule’s provisions allowing the Department to require schools that have engaged in troubling behavior to post letters of credit so money will be available to pay victims and creditors:

“While it is not our place to tell you what to say, if you want to weigh in on this issue you should state that “No letters of credit should be required until such time as a case is decided against the school. Anything else has the potential to reward frivolous law suits and damage students who simply want to finish their education and pursue their careers.

 Schools would be required to secure credit which would divert valuable resources away from your education.

 Such letters of credit are difficult to obtain, and may cause schools to close.

 If a school closes, students may need to start their education elsewhere, adding to the time it takes for students to finish their programs.”

Gunderson’s toolkit concludes with some typically Gundersonian exclaimation marks: “We encourage you to share with the Department any thoughts you might have as to how such regulations could impact you, or students like you in the future, seeking a career education. Anything you say is appropriate! Any position you take is welcome!”