For-Profit Colleges Say Students Are Being Defrauded (By Someone Else)

posted at 9:18 pm by David Halperin 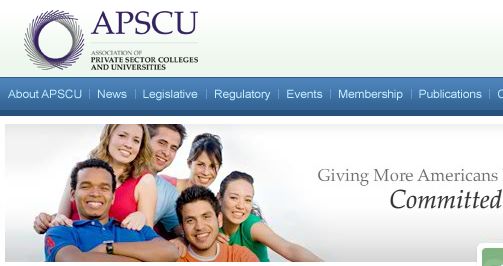 The for-profit colleges’ depleted trade group CECU (formerly APSCU) reports in a new filing with the government a seemingly remarkable fact: Last month, the association wrote a letter to the Department of Education, the Federal Trade Commission, and the Consumer Financial Protection Bureau demanding that those agencies fight against scam websites run by shady outfits seeking to fleece students. (See p. 179 here.)  The CECU letter warns of “injury to innocent students/graduates.”

That fact is remarkable, because, as documented by multiple congressional investigations, law enforcement investigations, media reporting, and the accounts of students and whistleblowers, for the past two decades, numerous CECU member colleges have used scam websites, misleading advertising, deceptive recruiting, and false reporting to fleece students.

I agree with CECU: There are shady operations that use misleading websites to convince students — students who believe they were defrauded — to pay high fees for assistance in applying to the Department of Education to get their federal loans forgiven. In fact, in April, I filed a complaint about some of these operations with the same federal agencies.

But based on CECU’s failure to complain to authorities about all the ways that students get ripped off by for-profit colleges, the colleges’ online lead generators, and their telephone boiler rooms, one might wonder if the organization’s concern is less about students getting scammed by debt relief operations and more about the growing volume of valid student complaints that they were scammed by mega-fraud Corinthian Colleges, a CECU/APSCU member until its collapse, and by other predatory for-profit schools. As is clear from CECU’s comment submitted Monday to the Education Department, demanding that the Department withdrew its new proposed student debt relief rules, the for-profit colleges are worried that granting of debt relief to defrauded students will lead the Department to seek to recoup funds from the colleges who did the defrauding.

I’m aware of one other time that CECU/APSCU warned of scams: In 2012 it warned executives planning to attend the group’s annual convention: “Lodging Scam Alert: BEWARE!” Apparently, unsanctioned companies were calling convention registrants “luring them to book hotel rooms through them…. This effort is in no way sanctioned by APSCU and interferes with APSCU’s existing contracts with hotels… PLEASE DO NOT RESPOND TO THESE ATTEMPTS AT ‘HOUSING PIRACY,’ WHICH IS A SCAM AFFECTING THE LAS VEGAS CONVENTION BUSINESS.”

You can count on CECU to fight against fraud — when the fraud threatens its members and their bottom line. As to the fraud against students and taxpayers that many of its members have used to generate revenue, you don’t hear much from CECU about that.