posted at 2:52 pm by David Halperin 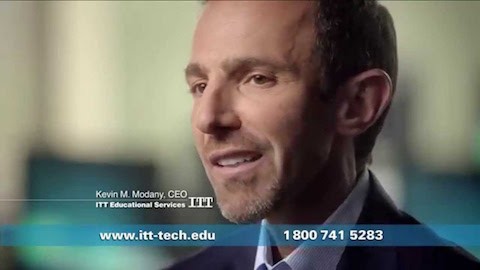 Two new reports — one from a journalist, the other from an investment research firm — confirm in stark terms that former ITT Tech CEO Kevin Modany, his top lieutenants, and the company’s board of directors have only themselves to blame for the company’s collapse.

ITT shut its campuses and declared bankruptcy after the U.S. Department of Education, citing a range of questionable business practices, banned the company from enrolling new students using federal grants and loans. In a typically self-pitying, remorseless statement, ITT blamed all its woes on the Department. The Wall Street Journal editorial board, which consistently, vociferously, and bizarrely defends a for-profit college industry that gets close to 90 percent of its revenue from taxpayers and engages in widespread waste, fraud, and abuse, joined in, calling the Department’s action an “execution.”

In reality, ITT is responsible for and deserved its demise. ITT, which has been getting as much as $1.1 billion annually in taxpayer funds, and got $664 million last year, has for years engaged in predatory and reckless practices — coercive and deceptive recruiting, unconscionable student loan practices, financial aid abuses, poor quality programs but exhorbitant tuition, alleged fraud on investors, and much more. For its bad behavior, ITT has been under investigation or sued by the Securities and Exchange Commission, the Consumer Financial Protection Bureau, and the attorneys general of New Mexico, Arkansas, Arizona, Connecticut, Idaho, Iowa, Kentucky, Missouri, Nebraska, North Carolina, Oregon, Pennsylvania and Washington.

Bradley Safalow of PAA Research shared his firm’s report, released today. Safalow, who for years has closely followed the for-profit college sector, has consistently warned investors that ITT’s business model was unsustainable. But the report is not some shallow victory lap — it’s a detailed confirmation of everything ITT did wrong: (1) it charged sky-high tuition; (2) its educational quality was “abysmal” with “shockingly low” spending on instruction; (3) it took about 95 percent of its revenue from government sources, and depended on putting the financial risks on the government and outside lenders; (4) it spent billions on executive compensation and stock buybacks to boost the company’s share price; (5) it engaged in risky schemes to try to stay in compliance with federal rules.

Safalow notes, in particular, that in recent years ITT decided to target lower income students, an approach, he writes, for which one would expect a “company to INCREASE its investment in educational services and student support.” Instead, ITT “did the exact opposite, which yielded the expected result-awful outcomes…”  When your school is that bad, no amount of deceptive recruiting and public relations can mask it, especially as the public has become increasingly aware of for-profit college scamming.  As a result, fewer and fewer people wanted to enroll at ITT Tech. No students, no money.

A new piece on Gizmodo by Michael Nunez, “How ITT Tech Screwed Students and Made Millions,” tells the same story, but adds reporting from the ground level. (My only quibble is that “Millions” should be “Billions.”)  Nunez spoke with dozens of ex-students and faculty “about the school’s predatory recruiting and lending practices, and the inner workings of a pervasive scam that affected tens of thousands of students across 136 campuses in 38 states.”

ITT recruiters used the notorious “Pain Funnel,” with escalating hurtful questions aimed at pressuring students to sign up.  Student after student say ITT misled them about the actual costs of attending.

Once enrolled, students found the educational quality at ITT to be awful — outdated databases, materials, and technologies; instructors with little knowledge or experience.

One student who spoke with Nunez, Mario Valladares, attended ITT in Seattle from 2008 to 2012, studying video game design. He borrowed $65,000 in federal loans and $7,000 in private loans, and, with mounting interest, he now owes more than $200,000. Instead of a design job, he works as a game tester.  As Valladares notes, “You don’t even need a high school diploma to be a game tester.”

The stories accumulate of ITT grads with worthless degrees: Veronica, who studied electrical engineering at ITT, is now a telemarketer making $5.95 an hour; she says employers for better jobs would laugh when they saw ITT on her resume. Zach is a Comcast cable guy, a job for which only a high school diploma or GED is needed.  ITT counted many of these jobs as successful placements.

A group of courageous ITT students announced a debt strike last week, saying they won’t pay back their federal loans because the Department of Education let them down by bestowing its Good Housekeeping seal on fraudulent ITT.  Of course they’re right.

The challenges for existing ITT students in finding a new road ahead are daunting. At least the Department of Education is doing more to help this time, and many community colleges are stepping up. Unfortunately, many scam artists are also moving in, from predatory debt relief assistance operations to other predatory for-profit colleges whose pious offers to help ITT students are disgraceful.

The broader challenge is addressing the reality that, even if predatory ITT and predatory Corinthian are now shuttered, there are many other predatory for-profits, including a significant number under law enforcement investigation, that continue to sign up students, using taxpayer dollars, every single day, without having implemented sufficient reforms to make the investment valid. Or, as Nunez puts it, “There are plenty of other schools out there that want ‘your ass in a class’ and don’t seem to care what happens next—as long as you’re paying.”

Getting the truth out is key to making sure that Washington policymakers, investors, students, and others make the right choices going forward.  Or, in Safalow’s words, “The manner in which the narrative surrounding [ITT’s] unraveling is framed will likely have a large impact on US higher education policy prospectively.”