posted at 8:59 pm by David Halperin 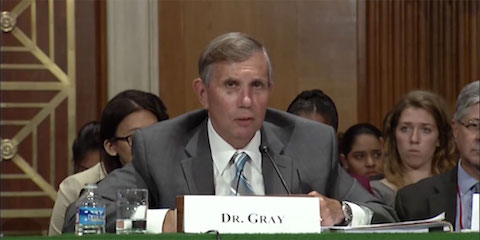 I’ve received information that Albert C. Gray, who has been the President and Chief Executive Officer of the controversial accrediting body the Accrediting Council for Independent Colleges and Schools (ACICS), may be leaving that organization.

Sunday afternoon I emailed Anthony Bieda, ACICS’s Vice President of External Affairs, asking him about this information — that his group’s CEO would no longer be CEO. Bieda replied: “No comment, on behalf of the Board of ACICS.”

UPDATE 04-18-16 9:30 am: This morning, Albert Gray’s name no longer appears on the ACICS website staff page. Anthony Bieda’s title has been changed to “Executive in Charge.”

Gray and ACICS board chair Lawrence Leak did not respond to requests for comment.

Gray’s failed defenses of the troubled accreditor have made him an easy target for criticism, and based on ACICS’s record, it appears he deserves such criticism.  But if indeed Gray leaves ACICS, his departure is unlikely to end the inquiry into whether the U.S. Department of Education should keep recognizing ACICS as a guarantor of educational quality. And it shouldn’t end that inquiry.

ACICS has been under fire in recent months, given that a number of the schools it was supposed to oversee, including the now-collapsed Corinthian Colleges, have been exposed as predatory companies that have left many students worse off than when they started.

Accreditation by non-profit bodies like ACICS makes schools eligible to receive federal student grants and loans, and ACICS schools have been receiving billions annually in such aid. But many ACICS-approved schools, not just Corinthian, have poor track records — including those owned by predatory companies ITT Tech, Kaplan, EDMC (the Art Institutes), Career Education Corporation (Sanford-Brown), Alta Colleges (Westwood), Globe, FastTrain, and Daymar; all these companies have been under investigation by law enforcement for deceptive practices.

The latest ACICS-accredited school to make news is Kansas-based Wright Career College, which late last week suddenly filed for bankruptcy and shut its campuses, leaving about 1,000 students in limbo.

Gray endured a blistering cross-examination by Senator Elizabeth Warren at a hearing last summer over the Corinthian debacle and whether ACICS was asleep at the switch. WATCH:

In his Senate testimony, Gray said ACICS “found no evidence that [Corinthian] lied to their students or defrauded them.” Pressed as to whether ACICS had erred regarding Corinthian, Gray testified, “I’d be the first to admit that accreditors like any other organization make mistakes. This was not one of those mistakes.”

In advance of the upcoming June meeting of the U.S. Department of Education’s advisory committee on accreditation, a number of advocates for students have called on the Department to end its recognition of ACICS as an organization whose approval allows schools to receive federal student aid. Those sending letters asking the Department to dump ACICS include thirteen state attorneys general; Ben Miller of the Center for American Progress; nine veterans groups including
Student Veterans of America and Vietnam Veterans of America; and a coalition of 23 groups that advocate for students, consumers, and educators.

The letter by the coalition, which includes the American Association of State Colleges and Universities (AASCU), Consumers Union, National Consumer Law Center, the Service Employees International Union (SEIU), USPIRG, and VetJobs, concludes, “It seems impossible that ACICS could have conducted anything resembling a rigorous investigation of the allegations against Corinthian and come up with no problems.” The letter charges that “lax gatekeeping” by ACICS “has resulted in the worst student outcomes of any major accreditor—a trail of numbers that represents a massive toll of human devastation across the country. It has left low-income students burdened by debts they have no hope of repaying after being lied to and lured into programs of questionable quality through false promises and statistics.” (Disclosure: I participate in the coalition work that produced this letter and other advocacy on for-profit college issues.)

The attorneys general, in their letter, write, “Even in the crowded field of accrediting failures, ACICS deserves special opprobrium.” They note a recent investigation by ProPublica that found that just 35% of students at ACICS-accredited schools graduate, “the lowest rate for any accreditor.” Moreover, the AGs noted, “Of students who actually did graduate, more than one in five defaulted on their student loans within the first three years after graduation. A full 60% had not yet paid down a single dollar of the principal balance on their loans.”

ProPublica found that two-thirds of ACICS’ commissioners since 2010 were simultaneously executives at for-profit colleges. The ACICS board of directors and committees has included representatives of predatory schools including ITT and Corinthian, a fact that, the AGs write, raises “serious questions about potential conflicts of interests and therefore ACICS’s ability to impartially evaluate those and other schools.”

ACICS told ProPublica last week that the coalition letter contained “misleading allegations” and that it was preparing a “comprehensive response” to the various criticisms.

But given the terrible abuses of students by for-profit colleges that have occurred, it is clearly time, long past time, for the Department of Education to look critically at ACICS and the other national and regional accreditors of for-profit schools and to demand fundamental changes. The departure of one elder from this Potemkin Village changes nothing.

Statement by the Accrediting Council for Independent Colleges and Schools (ACICS)

Today, the ACICS Board of Directors announced a change in the top leadership of the agency.  It has appointed Anthony S. Bieda, 63 of Alexandria, VA to serve as Executive in Charge.  Simultaneously, the Board will initiate a search for a President & Chief Executive Officer.

“Mr. Bieda has been appointed to oversee the day to day operations of ACICS, including authority over all of the resources of the organization,” said Dr. Lawrence Leak, Chair of the Board of Directors. “He will report directly to the Board and Council.  This Council takes the concerns raised by a variety of external stakeholders very seriously,” Leak said. “The assurance of quality and integrity of private post-secondary education by ACICS will become stronger and more effective in light of these concerns.”

Bieda previously served as vice president of external affairs for ACICS since 2007.  His experience in public and private higher education began more than 20 years ago, when he managed public affairs for the Arizona University system.  He holds a Master’s of Business Administration from Regis University and served for several years in municipal county government in Oregon before joining ACICS.

Bieda replaces Dr. Albert Gray, who resigned after more than seven years as President and CEO.

“I appreciate and respect the loyal service and dedicated leadership of Al Gray to ACICS during difficult and challenging times,” said Dr. Leak. “On behalf of the Board of Directors, I wish Dr. Gray every success and best wishes.”